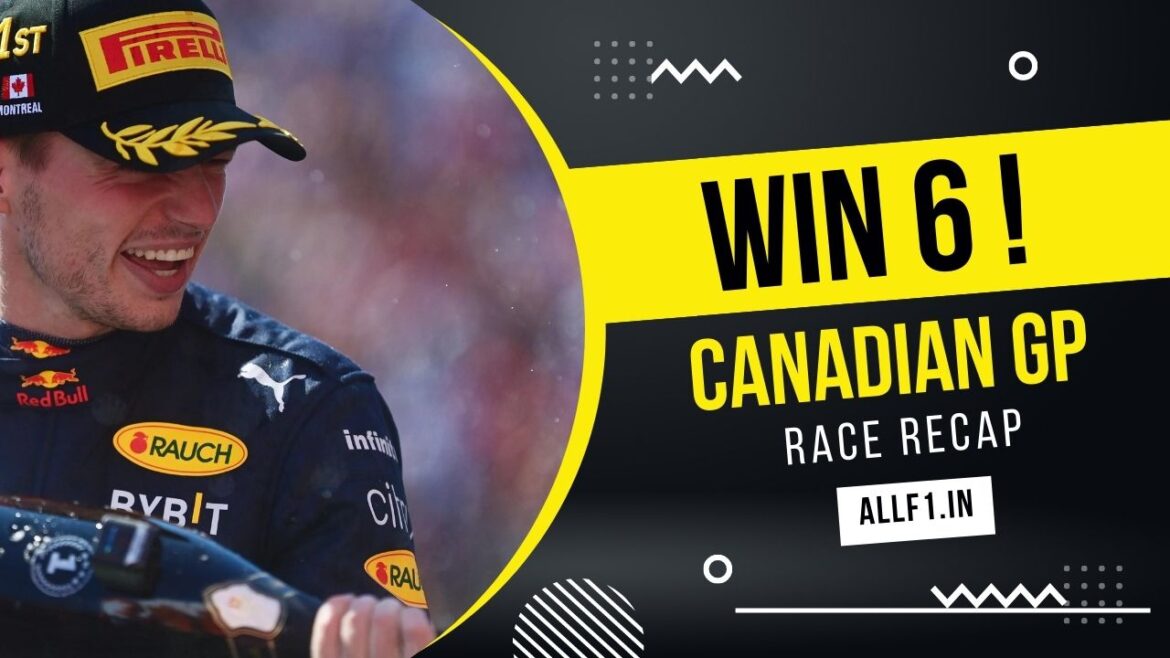 Canadian Gp after a fantastic Qualifying session on Saturday saw Max Verstappen extending his lead in the championship to a healthy 46-point lead from Charles Leclerc. Allf1 round the important talking point and strategies that went into the relatively straightforward victory for the defending world champion.

Max Verstappen’s 6th victory of the season was relatively straight forward but his main challenger Carlos Sainz remained in the DRS range in the closing stages of the Canadian Gp but was never close enough to make a move. The straight-line speed of the might Redbull was evident.

Despite losing radio communications halfway through the race, the pit board helped massively. Teammate Sergio Perez retired early due to a sudden loss of power, which means Verstappen’s lead now sits at a fairly comfortable 46 points, effectively almost two races clear of the opposition after 9 of 22 races.

Ferrari’s reliability was good this weekend after a double DNF in Azerbaijan Gp last time. Charles Leclerc starting from the back of the grid was able to make good strides but wasn’t able to achieve podium places as expected by many.

The slow pit stop for Leclerc in the Canadian Gp made him stuck in a DRS train behind Ocon who was also on new tires but the pace of the Ferrari was good. With Leclerc getting a healthy load of new parts from the penalty this race, the team would be making some changes to increase the straight-line speed to claw back some points from the British Gp in two weeks’ time.

The Mercedes duo of Russell and Lewis Hamiton though fantastically low on pace had a lucky and lonely podium position in 3rd. 2nd for Lewis Hamilton this season.

We collated all the data we had and we made drastic changes to the set-up and it was much, much, much nicer—more in line with what is anticipated. It was good, when you get a full race distance in you find a lot of things out about the car and the relationship you have with the car and data, so there’s a lot to take from today. One really great thing is we’ve got really good reliability, which I think is a real tribute to all the great work all the team is doing at both factories.

“I really hope to move to Silverstone, it’s such an important race for us, and for me. I just want to be in a battle with these guys.”

Suggested Reading: Will Mercedes ever Catchup?

Fernando Alonso after a fantastic Qualifying session was mugged left right and center from the start of the Grandprix. We were expecting an Alonso train from 2nd to 10 the position in Canadian Gp but what we got was an engine issue which saw Alonso completely out of contention. He came home in seventh place, one spot behind teammate Esteban Ocon.

Alonso has later assessed a five-second time penalty for weaving while defending against Valtteri Bottas, demoting him to ninth.

Mclaren’s Weekend is a weekend to forget both Lando and Daniel Ricciardo finished outside the points. A botched double-stack pitstop for McLaren summed up their race after a slow stop with Ricciardo delayed the arrival of teammate Norris. On top of the slow pitstop for Ricciardo, the team put the wrong tires on Norris’ car, cementing his P15 place finish at the chequered flag.

From the 3rd row start after Canadian Gp Qualifying the Haas went nowhere. Going from fifth and sixth on the grid to finishing 17th and 19th was the worst-case scenario. Kevin Magnussen’s prospects from the fifth unraveled after he sustained minor front wing endplate damage on the opening lap and was instructed by Race Control to pit for repairs.

Think back to Jeddah last year, Lewis Hamilton won the race with half a front wing… which I think is correct, you know, let us race if we can. Feels suddenly very different. Monaco they don’t start us because it starts drizzling. Here I’m called in because I have a scratch on my front wing.”

So a good day for Verstappen, but it wasn’t perfect for Red Bull. Perez retired early on with an apparent hydraulics issue, and the team will need to understand what happened in a bid to prevent any more mechanical failures this season. As for Mercedes, are they back in the fight? They still looked a few tenths short of the outright pace of the top two teams but were comfortably ahead of the rest of the field.

It’s a home race for three drivers and plenty of teams. The British fans will be out in force, and the track is expected to suit Ferrari. That all might be so, but right now, you can’t look further than the utterly dominant Verstappen and Red Bull. Six wins from nine races – he is in control of this championship.