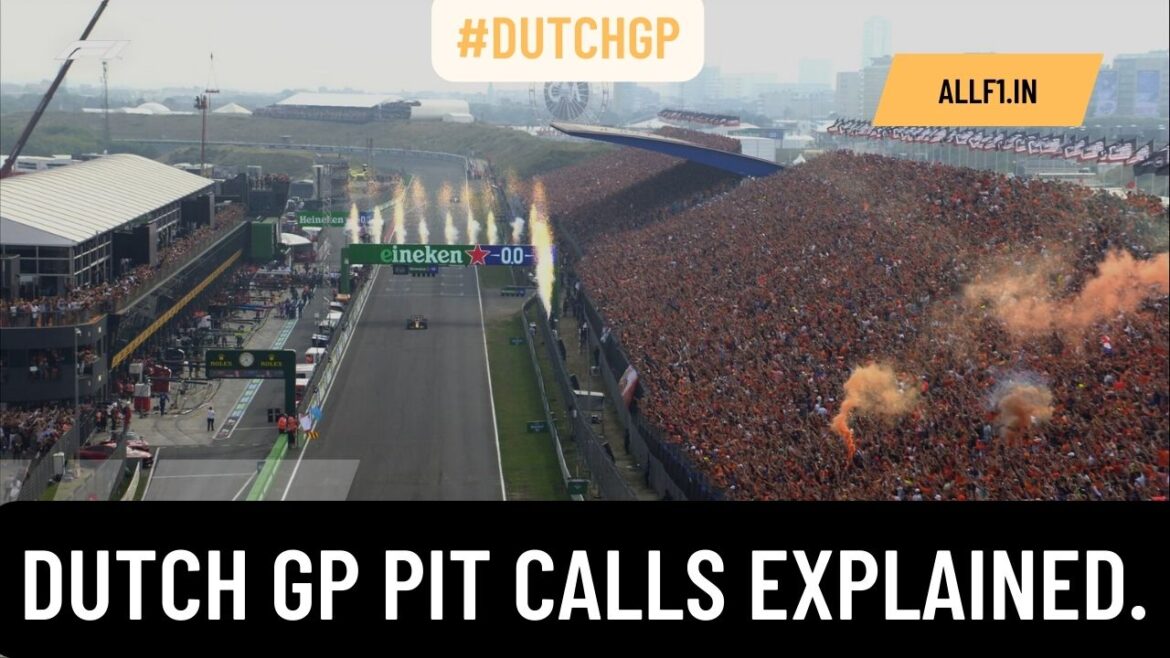 Dutch Gp 2022 scheduled in Round 15 of the Formula One World Championship comes to Zandvoort. It’s not easy to overtake in this circuit. Softs for the front runner but Hamilton is on Medium tire. In this section, we look at everything that changed the course of the race.

With the Dutch Gp tickets 2022 sold out last year itself, the crowd is positively Orange.

The lights go off, and the crowd drowns out the sound of the cars springing into action. It’s a good start for Verstappen and Leclerc, with the Dutchman nipping ahead. Hamilton makes a surprisingly good start, but it looks like the smallest of contacts between him and Sainz but they manage to keep going.

Hamilton has DRS in the fight for third, but as he closes down the main straight, he can’t live with the Ferrari through Turn 1. But he remains tucked up behind Sainz through the middle of the lap.

That Mercedes is looking really on it on race pace so far. The leading pair breaks away from Carlos Sainz by 0.5 sec per lap. Hamilton is still behind him in the DRS range. Seb pits, that trigger Ricciardo and Gasly to come in, followed by Fernando Alonso in Dutch Gp.

Alonso is the first of the runners to change to hards at the end of Lap 12. The post-race interview showed that they have already planned on doing so after they ran in Free Practice. Alonso’s pace was on par or better than what he did on softs. This made Mercedes very interested in the one-stop strategy for Russel and Hamilton.

This triggered Ocon and Lando to change for the Hards in the first stint of the Dutch Gp 2022 all looking for a one-stop. The VSC or the Safety car percentage in this track is always high so they can gamble the one-stop to two-stop during this period.

Leclerc pitted at the end of lap 17 and went on to Medium and quickly found their pace disappearing. For some reason, Ferrari and Redbull were strong on softs but rubbish on mediums. Mercedes though has pace in the medium. Hamilton and Russell pumping in good lap times at this stage.

Hamilton pitted at the end of Lap 29 and Russell pitted on Lap 31 for hards. Max meanwhile on the radio said, “He is not keen on the hards”. Mercedes’s pace on the hards was impressive. On lap 32 Hamilton was doing 1.15.801 and Max is 1.16.553 on the medium tires. At this point, Redbull knew they have change max tires or risk losing the lead.

On Lap 37 Hamilton has passed Perez for a Podium spot. Everyone thought he could win this race. But Tsunoda had other plans.

On Lap 45 Tsunoda stopped on the track saying his tires are not fitted properly, he was radioed to continue as the data shows it’s ok. He pops into the pits and changed tires and fastened his loosened seat belt and carried on for one lap and stopped again bringing in the VSC.

Meanwhile, Leclerc pits. That moved Hamilton up to second and Russell to third. Hards for Leclerc, a 2.5s stop and he comes out in fourth ahead of Perez. Right then. Can he make some moves on track? Ferrari at that point ditched the Medium for Hards.

Verstappen leads on fresh hard tires, the pick of the compounds. Hamilton is chasing on the mediums and has 12.5s to make up for victory. Russell is 3.4s back in third, and Leclerc is fourth having pitted just before the VSC came out.

Right when we thought the racing is on and Hamilton is on a fresher set of tires and has 12 seconds to catch. Bottas stops his car after an engine failure on Lap 55 of 72. The safety car is out in the final stages of the Dutch GP.

Max is told to box and he rejoins back of Hamilton and Russel on soft tires. Max is on fresher tires and behind two Mercedes in a worn-out tire. This forced Mercedes into the pits with Russell opting for the soft and Hamilton on a Medium tire.

Russell made a call for softs but Hamilton entrusted the team for the tires and boy did they screw it up. With 12 laps to go, a used set of soft would have made Hamilton and Russell both on the podium. With the green flag, all Max needed was one corner and Hamilton is dispatched to second place.

Russell and Leclerc picked Hamilton clean on the next two laps and by lap 65 Hamilton’s chances on the podium in the Dutch Gp 2022 are gone.

He crosses the line, and the fireworks go off down the main straight as the party well and truly gets started. What can this man not do this season? Another win for Verstappen, and this time in front of his home crowd. “A majestic drive,” the team tells him. “They threw everything at us!” he laughs in return.