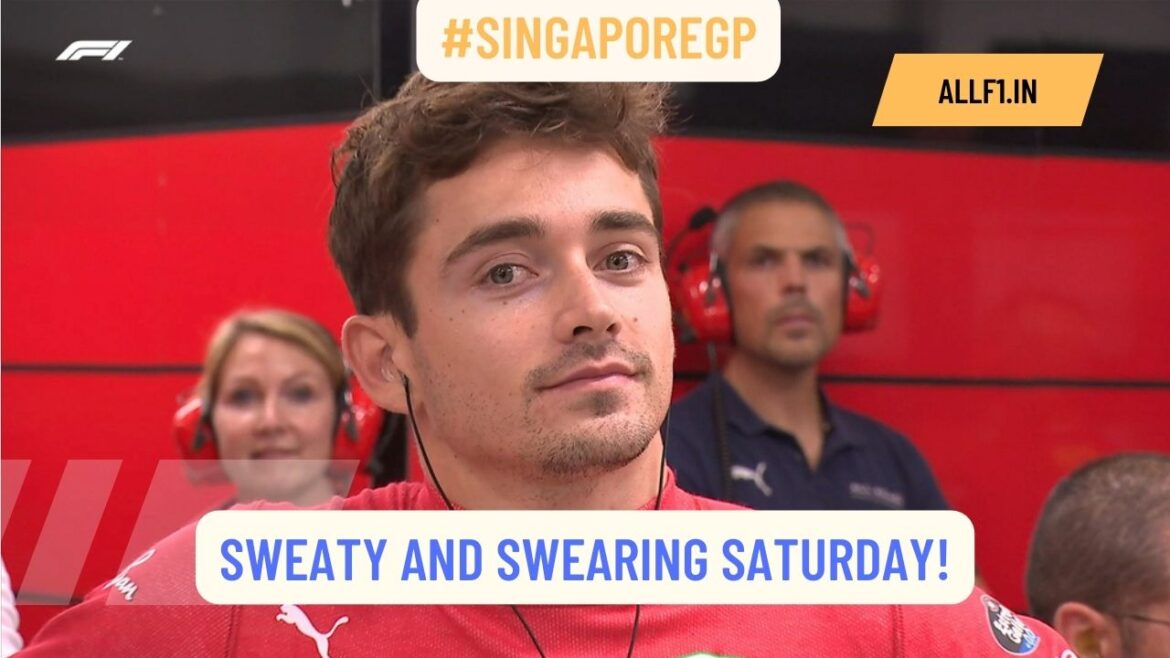 It’s Charles Leclerc and Perez on the front row after Max Verstappen abandons the lap in the final moments of the Singapore Qualifying. In this section, we look into all that happened in the streamy and sweaty Qualifying.

Singapore Gp, Round 17 of the Formula One World Championship 2022. The First night race ever to enter F1. With humidity of 85%, it’s warm, not windy, and extremely sweaty.

There is a queue at the end of the pit lane already both Mercedes cars are down there on the interest. Green light and the Mercedes, Alpha Tauri, and Mclaren duo are out along with Latifi and Ocon. “Still a bit damp,” says Norris.

Russel starts the flying lap, Plenty of cars are heading out and this will dry out the racing line that bit quicker. It’s risky out there – no one will want to get caught out on the wrong compound at the wrong time.

Hamilton has improved and leads from Leclerc and Sainz, with Russell fourth and Perez fifth. But Verstappen is one his first flying lap and he’s gone purple (fastest of all) in the first and second sectors. He goes top by two tenths.

The yellows are out briefly which could be bad news for a few drivers. Vettel improves to p11, Latifi pits and he’s out. Ricciardo’s lap is only good enough for 16th and he’s out too. Ocon isn’t on a lap so he is out and it is all on Schumacher in P17 – can he push Bottas down and out in Singapore Gp Qualifying? and he does.

Greenlight for Q2 and all are on inters. Drying up quickly says, Charles Leclerc as Sainz starts a flying lap. Leclerc sets a 1m 52.343s for P1 – but Hamilton can’t match it, not even close. He is over a second and a half back, but Verstappen at least gets closer albeit 0.380s back in Singapore Gp Qualifying.

So it is Leclerc from Verstappen and Perez, as Sainz slots into fourth with his first representative lap. That leaves the initial drop zone set and it consists of Schumacher, Magnussen, Russell, Tsunoda, and Zhou.

Leclerc is having none of that. He has radioed his team to ask to box for a set of slicks.  Ferrari has overruled their man and put him back on the green-marked intermediate rubber. but the slicks are being bolted on to… Stroll’s car! Both he and teammate Vettel are on soft tires for their next runs.

Slick doesn’t work yet. Magnussen improves to eighth, which drops Russell to ninth and Alonso to P10. Vettel goes straight on at Turn 7 so that’s his qualifying over. Schumacher can’t improve and is 13th. Russell is in P11 and Stroll 12th – both are on a lap. Stroll has a poor final sector which is where most of the water is and he stays 12th. But Russell doesn’t improve and is knocked out!

Verstappen and Sainz on Softs, Magnessan and Tsuonda are the ones in inters. The track is drying up fast, as Alonso goes fastest – no, Leclerc does. No, no – Hamilton has just retaken the top spot.

But the yellows are out, as Gasly has gone straight on at Turn 18, and that wrecks Magnussen’s lap. This is a messy lap from Verstappen, he runs wide and comes oh so close to the barriers. He goes into second, 0.376s back but left plenty of time out there for sure. He’ll be rushing to get back to the pits for a fresh set of soft.

It doesn’t look like anyone is coming in here, with so little time left on the clock. Ferrari asks Sainz to box but he refuses and opts to stay out. Tsunoda has pitted for softs and so has Magnussen.

An unbelievable session is topped by Leclerc once again for his ninth pole of the year. Verstappen was furious after being called into the pits and it sounded like he didn’t have enough fuel to get around again. He starts down in P8.