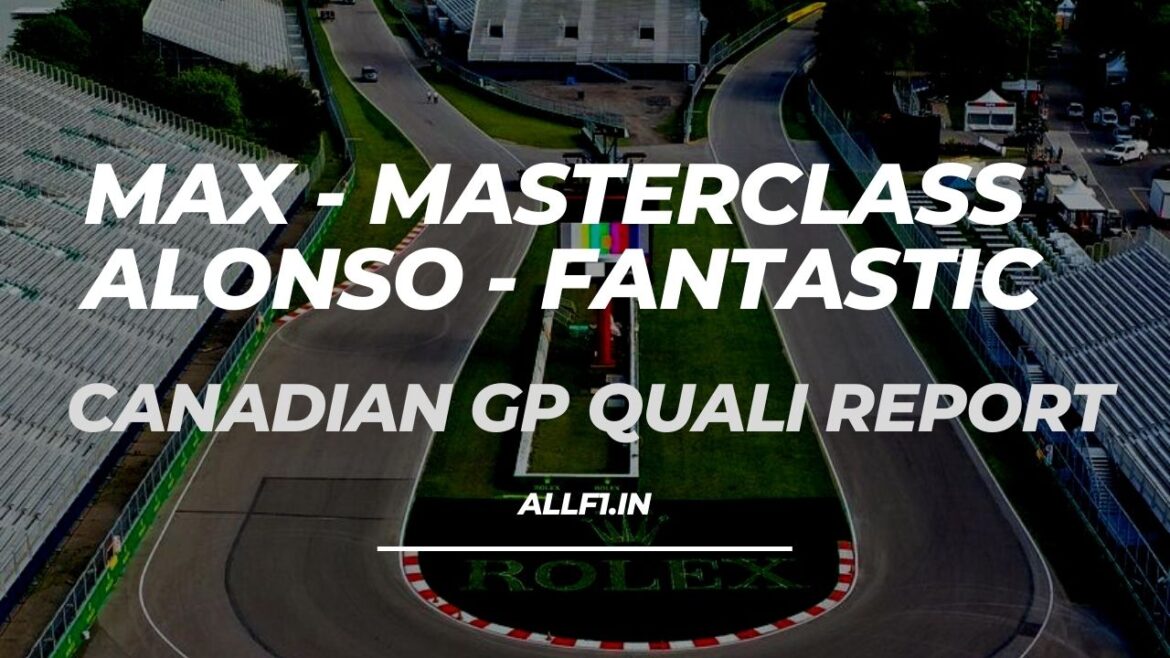 Canadian Gp Qualifying saw Red Bull’s Max Verstappen on Pole. His qualifying was called “masterclass” which is hard to disagree with. He will have Alonso alongside. Sainz and Hamilton share the second row. Magnussen and Schumacher share the third row in an unbelievable result for Haas.

In this section, we look into how it all went down in this awesome Canadian Gp Qualifying.

When it rains, it pours. It has been raining pretty much since FP2 finished yesterday, those dry laps are a thing of the past. Steady drizzle has been the name of the game so far today, and there are no signs of the conditions letting up.

Full Wets for everyone, it looks likely that most are fuelled for multiple flying laps in these early stages, with the track likely to quicken as Q1 continues once the racing line starts to get cleared of water. Nothing clears the water faster than 20 F1 cars roaring around.

Tsunoda is back in the pits, and that could well be his qualifying done and dusted given he is starting from the back tomorrow. Fastest sectors coming in thick and fast, which is no surprise despite the rain continuing to fall. The racing line is at least being cleared of some standing water, although it is a modified racing line compared to that from the dry, to avoid the huge puddles.

As the chequered flag is waved in Q1, Vettel only goes 16th but he will get another lap here. But Gasly does take the chequered flag and he is now P16 and out! That is a real shock. All eyes are on the Aston Martin pair who can still save themselves but no.

Well, the stewards are set to be busy post-session, with a whole raft of incidents to investigate later on. Stroll’s incident was when Sainz ran wide, and the others are self-explanatory.

A banker lap on the full wets is no bad plan for the start of this segment, with puddles still very visible across the race track. The intermediate runners will need to stick very closely to the racing line to get a good lap time in here.

Albon is in the barriers down at Turn 6. His front wing actually looks intact, and he might get away with this one. Indeed he does manage to reverse out and looks like he’s avoided any real damage there. But as Albon gets going, Perez is also in the barriers down between Turn 3 and Turn 4. Replays show Albon just locked up and went straight on and Perez did something very similar. RED FLAG IN CANADIAN GP.

Leclerc hasn’t headed out in Q2 and it is expected that he will remain in the Ferrari garage unless he wants to test out a setup change as with seconds to go for the chequered flag here in Canadian Gp, Norris dives to pit. He is out. Ocon improves to P8 and that knocks Bottas off.

Intermediate tires are the name of the game, with some parts of the track dry and others damp. Oh and throw in plenty of standing water if you venture off the racing line. If someone gambles here and gets it right, they could make a very big name for themselves.

With 8 mins to go Verstappen is in a league of his own here – he sets a 1m 22.701s, well over a second clear of Sainz. Alonso can’t match it, he’s third and that pushes Russell and Hamilton down to fourth and fifth respectively.

With 4 Mins to go New intermediate tires for everyone but George Russell, who has bolted on a set of red-marked soft tires. Has he just pulled a blinder, or is he about to throw away his session? the latter became true as he goes off at turn 2 the wettest part of the track.

The chequered flag is out and Verstappen is the man to beat. Sainz is on a lap here, as Hamilton crosses the line to stay second. Magnussen is fourth and has pitted, and Alonso is on a lap in fifth… Verstappen improves, and so does Sainz but the Spaniard goes second, to be replaced by Alonso who files to 2nd replacing Sainz in the final moments of the Canadian Gp.

Ocon was seventh, Russell eighth as his slick tire gamble did not come off. Ricciardo was ninth, Zhou a career-best P10. Well, if that was the appetizer, the main course tomorrow should be pretty tasty.