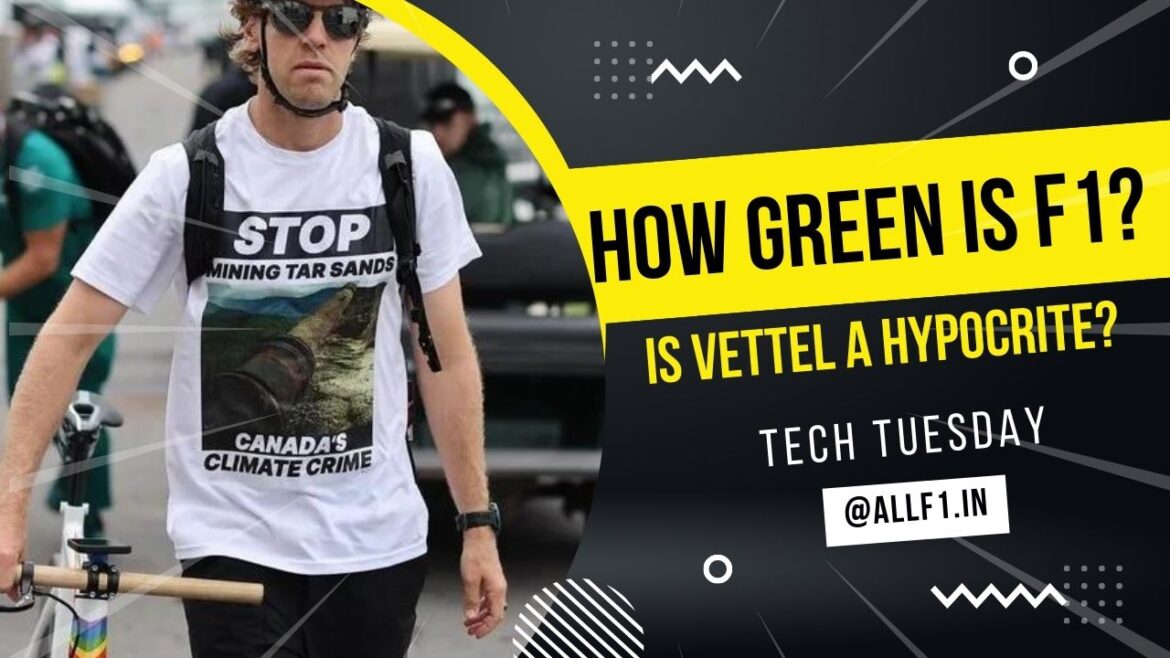 On this week’s Tech Tuesday we look into how green the F1 Engine is? The four-time world champion Sebastian Vettel has concerns about the sport’s future and he is right. Being an environmentalist at heart he says he understands the irony of racing cars at the weekend and attending climate submit on the weekdays.

His recent message in Canadian Gp has sparked a row on social media with the Department of Oil and Energy has even come up with a reply to the German driver’s concern pointing out the hypocrisy.

But how green is the F1? is Sebastian Vettel a hypocrite? In this section, we look into all the metrics of this gas-guzzling sport.

F1 now has an efficiency of 52%. That’s 32% more efficient than the most normal petrol road car. But I hear you, f1s is hybrid, it can’t be better than hybrid cars. It is 12% MORE efficient than a Toyota Prius hybrid. Electric motors have much greater efficiency. Formula E powertrains operate so close to 100% efficiency that gains are verging on the physically impossible.

With F1 cars of today being more efficient than ever before, it is no time to ditch the conventional engine and move to electric just yet. F1 overcame reluctance from many fuel manufacturers to come on board with the introduction of synthetic fuels from 2026.

Synthetic fuels are produced by artificial fuels. Right now fuels are refined and chemically separated from Crude oil that is being dug up from the earth. But Synthetic Fuel of the most common at the moment is to take carbon dioxide or monoxide from the atmosphere and synthesize it with hydrogen taken from Water.

So basically it removes carbon dioxide from the air. Awesome right? Not so much wait !!. To remove Carbon and Hydrogen from their natural form needs electrolysis which needs electricity. So if synthetic fuels need to be carbon neutral, the electricity used is to be renewable too. Basically from wind and Hydroelectricity. So the geography of the production facility is important too. Chile is the best place according to Porsche and Siemens.

F1 has said that it will be carbon neutral in 2030 and it’s not electrifying the cars. Though F1 cars racing in a venue for one weekend emits less carbon than a trans-Atlantic flight, but logistics of moving the equipment, pit stands, and a whole load of machinery from one place to another is a mammoth task indeed.

An audit conducted by the FIA in 2019 found that F1’s logistic activities produce approximately 256,000 tonnes of carbon dioxide per year, which is the equivalent of powering roughly 30,000 houses in the UK over the same period.

F1 cars already use biofuels but current regulations only mandate that the fuel include 5.75% of bio-components. In 2022 that number will increase to 10% and by 2025, when new power units are proposed to enter the competition, the FIA hopes to transition completely to 100% advanced sustainable fuels.

During a Webinar to GasWorld, he also said that the company has received a grant from Innovate UK and Raising Partners Angels an investment firm of which Damon Hill is a Member.

“We must look towards sustainable alternatives. This financing from Raising Partners Angels will enable us to prove not only how viable synthetic fuels are, but how critical they are too.”

How F1 Decides to cut down on logistics is another issue altogether but there is progress and concern to stay relevant in these fast-changing times.

The MGU-H is expected to fall by the wayside, but taking the training reins off MGU-K presents a colossal chance to push every element of the recovery system, from battery management and material improvement to pushing the upper limits of what can be done with regenerative braking, something the automotive sector is still tip-toeing its way into exploring.

Until then the discussion around climate change will always fall in favor of the other party and not for the sport.

One thought on “Tech Tuesday – How Green is F1? A Quick-Start Trick is needed!”

Didn’t expect this! Indian driver, Jehan Daruvala will test the MCL35M at Silverstone, tomorrow and Wednesday!