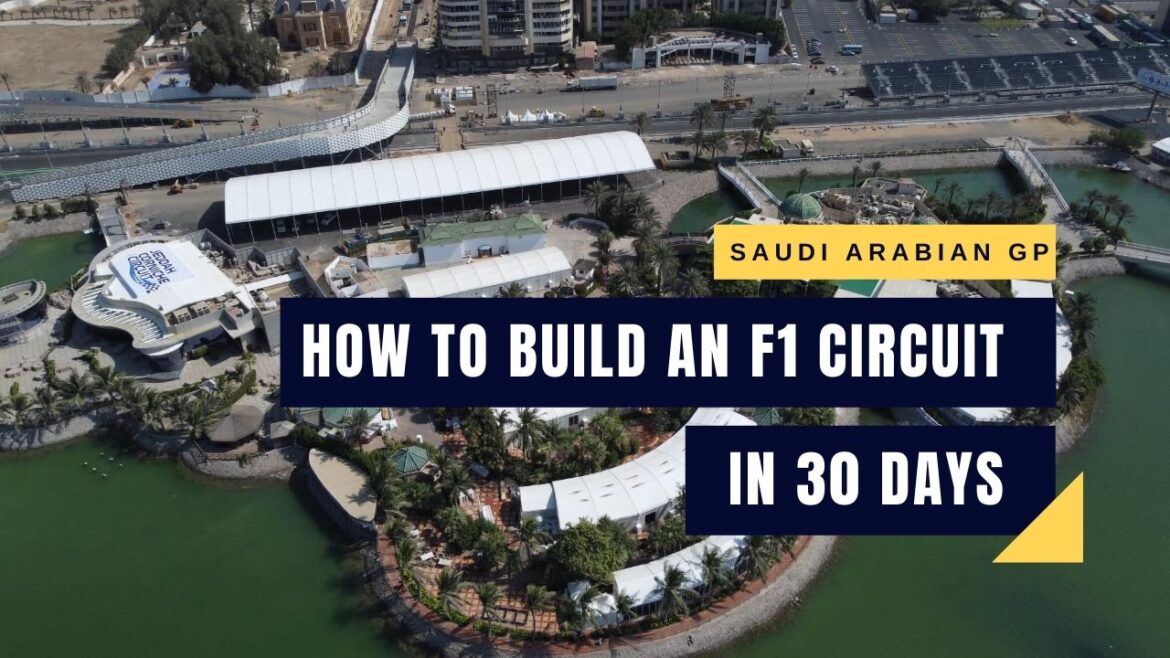 Saudi Arabian Gp, comes to the seaside town of Corniche, some 30km away from Jeddah. Hosting Round 21 of 22 of the Formula One World Championship, The track is supposed to be fast and flowing with 27 corners most of them taken flat out. In this section, we look into the geography and characteristics of the Jeddha Corniche F1 circuit set to host the Saudi Arabian Gp.

The Jeddah Corniche Circuit is, you won’t be surprised to hear, a temporary street circuit (albeit adorned with some permanent sections), located on the Corniche – a 30km coastal resort area of the ancient Saudi Arabian city of Jeddah.

The Saudi Arabian Gp track is the first one to use LED floodlights to reduce glare and light pollution. With 627 light poles around the track, each light has 1500 Vertical and Horizontal Luminance in power. The track is designed with interlocking elements since its a semi-permanent venture. The FIA fence elements are 4m by 3.5 m and weigh over 4 tons for each piece.

The Saudi Arabian Gp track uses the new safer barrier system like in the Zandvoort circuit and more like the ones used in Nascar Racing. This was introduced in Baku for the first time and is successful ever since. S.A.F.E.R barrier stands for “steel and foram energy reduction barrier”

The other Tecpro barrier is used for other runoffs and long radius corners like many other circuits. Though rains are not an option in the desert, since we are in a global warming catastrophe the circuit has been designed to drain 150 L/s. There are 3 bridges and a hospitality suite above the track in 4 locations which gives an awesome vantage point.

Fast. Very fast. Average speeds around the Saudi Arabain Gp Track are set to be 252km/h – quicker than those at Silverstone, and second on the 2021 calendar only to Monza – aka ‘The Temple of Speed’. It will, quite simply, be the fastest street circuit ever seen in Formula 1 – while the track will also feature the most corners on the 2021 calendar with 27, many of them quick, sinuous bends as the drivers wend their way along the Jeddah waterfront.

The average speeds around the Jeddah Corniche Circuit will be such that any grandstand should provide a spectacular viewing location. Nonetheless, the gladiatorial splendour of the grandstand surrounding the banked Turn 13 corner will make for a very special spot for F1 fans.

With 3 DRS zones in the circuit, it is going to be a super DRS train since it’s impossible to overtake without being on top of each other. but there are some wide enough places like turn 13 and Turn 27 where the drivers lunge into the inside.

No track has more championship hopes than this track. Honestly, the only likely scenario that Max Verstappen wins the title in Saudi Arabain Gp is when Mercedes does a disaster class. Even if Hamilton gets himself in a bad position he’s going to have that rocket of an engine in the back of his car from Brazil GP that should see him steer clear of finishing lower than 6th or 7th.

It’ll be quite the Herculean achievement for max to win the Saudi Arabian Gp let alone win the title during this race. However, if he manages to win in Saudi Arabian Gp, barring a disastrous race in Abu Dhabi, he should win the championship. It is a new track however and until cars are on the circuit we truly don’t know who this track will favour.