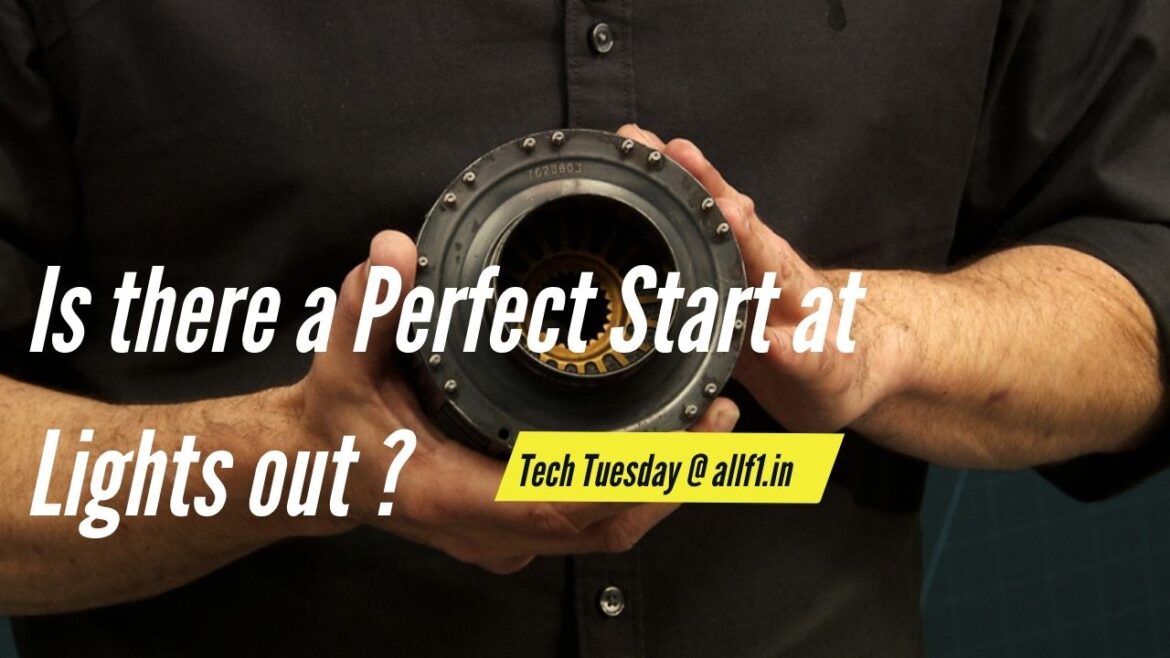 F1 drivers particularly, do a lot of work on this. There are various training programs to help drivers sharpen their reaction times. They will also typically do a couple of practice starts at the end of FP2 Sessions on the grid or from a designated point in the Pit exit. In this section of Tech Tuesday, we look into the Perfect Start procedure ideally

The sporting regulations, or more simply the big book of rules governing the sport of Formula 1, do not currently allow for any type of automated or computer-controlled launch control, thus the driver must manually perform the entire launch sequence using hand-operated clutches mounted to the back of his steering wheel.

(The bottom two paddles control the clutch, the top two paddles are to shift gears up and down)

Why are there two clutches? – Tech Tuesday

This is still difficult for me to wrap my head around but I will explain it as I currently understand it.

In a normal, everyday car with a manual/standard shift transmission, you have one clutch pedal. If the car is in gear with the clutch fully depressed, it will not go anywhere – there is no power being sent to the driven wheels. If you ever so slowly begin to release the clutch, eventually there will be a point where the vehicle will begin to creep forward. This is what is called the “bite point.”

The Driver during the start quickly lets the fully depressed clutch, then hold the clutch 2 to the biting point to control the wheel spin and is the part where the drivers get the drive off.

So what is the other clutch for – Tech Tuesday

Ok so the driver is on the grid holding Clutch #2 at the bite point, which should cause the car to move forward, but by simultaneously fully depressing Clutch #1, this cuts all power to the engine, essentially overriding Clutch #2. Clutch #1 is depressed fully (I assume with the driver’s right hand) so power is completely cut from the driven wheels ensuring the car doesn’t move or stall. So his right hand has the paddle for Clutch #1 all the way depressed, and his left hand has the paddle for Clutch #2 depressed partially as he waits for the lights to go out.

On the warm-up lap, engineers often ask drivers to perform a bite point find. When you are driving your road car, you’ll gradually release the clutch until you feel it “bite” and then you’ll apply some revs and continually release the clutch until you pull away. That naturally becomes an automatic process, and a BPF is a way to utilise the trick F1 computer to absolutely nail a launch sequence.

A BPF records the bite point for the clutch so that the launch sequence can be as fast as possible. The same process is applied when a driver leaves from a standstill in a pitstop or after a spin. When a driver changes gear, he does not operate the clutch himself. The driver flicks the paddle, and the ECU cuts the ignition. The clutch is depressed electronically and switches ratios. Since the introduction of seamless-shift gearboxes, that all happens in 0.005s.

Finally, on Tech Tuesday the regulation at present for the clutch in F1 right now has been changed in 2020.

Along with making pull-type paddle-activated clutches mandatory for each driver, the clutch signals used by the standard ECU will also be heavily monitored by the FIA to limit any advantageous mapping. Should a team wish to use two clutch paddles on the steering wheel, each paddle must now be identical in form, motion and mapping. Drivers may be asked to demonstrate that both paddles work identically.

Furthermore, the paddle must work linearly with the clutch meaning that the drivers’ actions must be wholly representative of the engagement of the clutch putting greater responsibility on the drivers.