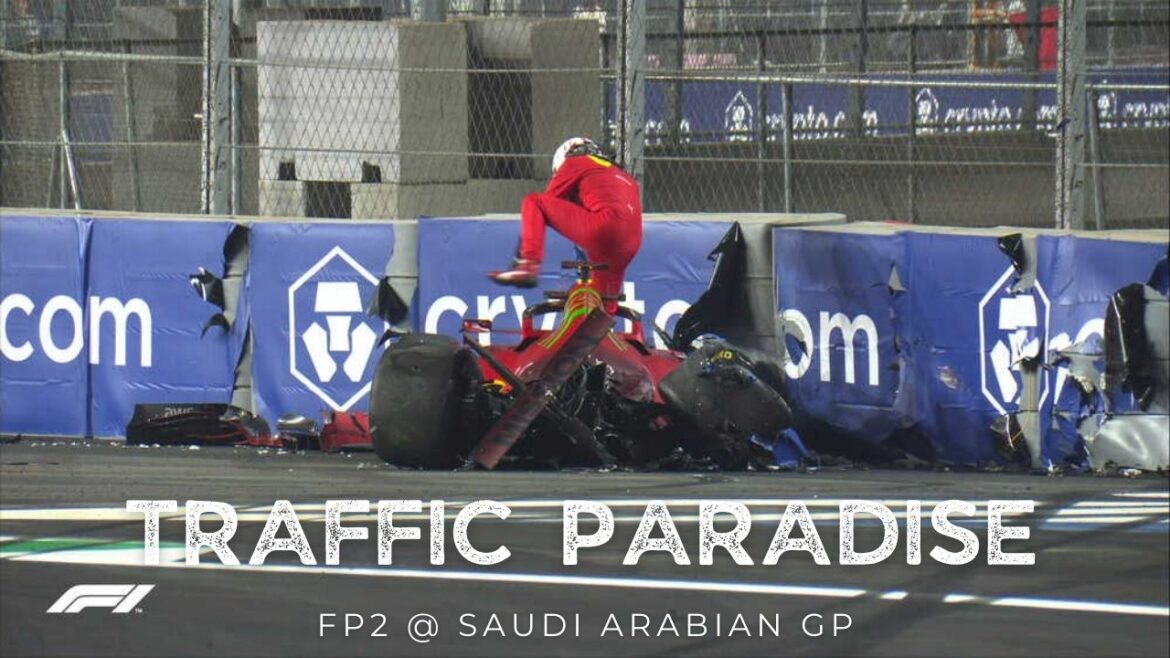 F1 has headed to Saudi Arabian Gp for the very first time, to the seaside city of Jeddah for the penultimate round of the season. With qualifying and the race itself set to take place under the lights, this street circuit could be aWith just two races to go and both championships up for grabs, the teammates will be crucial both here and in Abu Dhabi – and as such, Perez needs to up his game and get back in the mix at the front this weekend. spectacular location for the latest instalment of the championship fight. Round 21 of 22.

After a thrilling round of FP1 in Saudi Arabian Gp, it’s time for FP2. The Sun has gone down over the Red Sea both the track and cars are glittering with pride. FP1 was remarkably incident-free, with the grip levels much higher than expected.

Earlier with the sun still high in the sky, it was Lewis Hamilton who topped the timing sheets for Mercedes. The Silver Arrows chose to run the soft tyre in that session, using up two sets of the red-marked rubber. That was in contrast to Red Bull, which only used one set of softs and one set of hards.

The lights glow green at the end of the illuminated pit lane, and once again Carlos Sainz heads out first. This time he is shod with a set of hard compound tyres for his initial runs. Everyone is straight out, with just one hour under the lights this weekend before qualifying gets underway. Norris is the only driver straight out on the soft compound, everyone else is on a mix of mediums and hards.

Verstappen is on the medium compound and he propels himself to the top of the timing sheets with a 1m 30.104s. He looked strong on the hard compound earlier on, with often Red Bull just struggling on the softs concerning their rivals, but more often than not matching Mercedes on the harder compounds.

Medium is struggling a bit, with locks up left right and centre. Bottas is now top. Those medium tyres are coming into their own after a few laps, and his lap is now down into the very low 1m 29’s. That simulator predicted pole of 1m 27.9s looks like it could well be smashed tomorrow in Saudi Arabain Gp Qualifying.

Here comes Hamilton, and he now goes top. A 1m 29.018s is just six hundredths ahead of his teammate. Sparks flew throughout that entire lap, and he didn’t show any signs of suffering from poor tyre life despite a lock upon his previous lap.

Russell’s onboard shows a halo adorned with Sir Frank Williams’ favourite quote -“I feel the need, the need for speed.” But it isn’t a quite raw pace from him at the moment, as he radios to report a brake-by-wire issue, which fortunately resolves itself. Next is the Soft tire run in Saudi Arabian Gp.

Approaching the halfway mark in Saudi Arabian Gp, and plenty of teams have decided it is high time for some soft tyre runs. Perez is the first of the front runners to bolt on the red-marked runner, so he’ll set the marker lap here.

Gasly is one of the first to head back out and he has to negotiate a fair amount of traffic on his flying lap. And as a result, he only goes 12th not quite what he was hoping for after such a strong earlier session. Traffic is proving an issue, despite this being the second-longest track on the circuit, only 800m shorter than Spa. Ricciardo is one of the only drivers out there who have clean air for his first flying run.

So as of yet, Hamilton, Bottas and Verstappen are yet to improve since bolting on the soft tyres. Based on Verstappen’s radio message, he’d rather sacrifice long-run laps to get another flyer in here – which points towards qualifying being all-important, at a track where overtaking could be tricky despite the presence of three DRS zones.

Perez has got to grips with this circuit, after struggling in FP1. The Mexican has climbed up to seventh as it stands, which is slightly more respectable. He’ll be one to watch tomorrow, as he does have a very decent record at Baku – a circuit that of Saudi Arabian Gp has been compared to.

Plenty of cars have returned to the pits now, with plenty set to swap back to their original tyres for their race simulation runs. Given that this is the only truly representative session some teams may split their drivers and leave one on the softs for a longer run, to see how the C4 tyre holds up under a higher fuel load.

Hamilton is back out on his original medium tyres. He has yet to run the hard compound today – but with strategy as it stands a bit of a mystery, that might not be such a bad thing. The strategists will be analysing the data tonight before coming up with an idea of what to expect on Sunday, and if it is tricky to overtake here, undercutting or overcutting a rival in the pits may well decide the championship.

The yellows are out briefly for Mazepin, who has a moment at Turn 2. Replays show he lost the rear as he accelerated out of Turn 2, and nearly got collected by Hamilton who was fast approaching. The same happened with Norris and Sainz a brief moment later.

Leclerc has crashed down at Turn 23, and that car is in pieces. The good news is the Monegasque is getting out of the car and has confirmed he is okay on the radio. Replays show he took a touch too much kerb on entry and just lost the rear. On a street circuit with minimal run-off areas, there isn’t time to scrub much speed before the barriers loom – and that’s why his car has seen much much better days. The session will not be resumed!