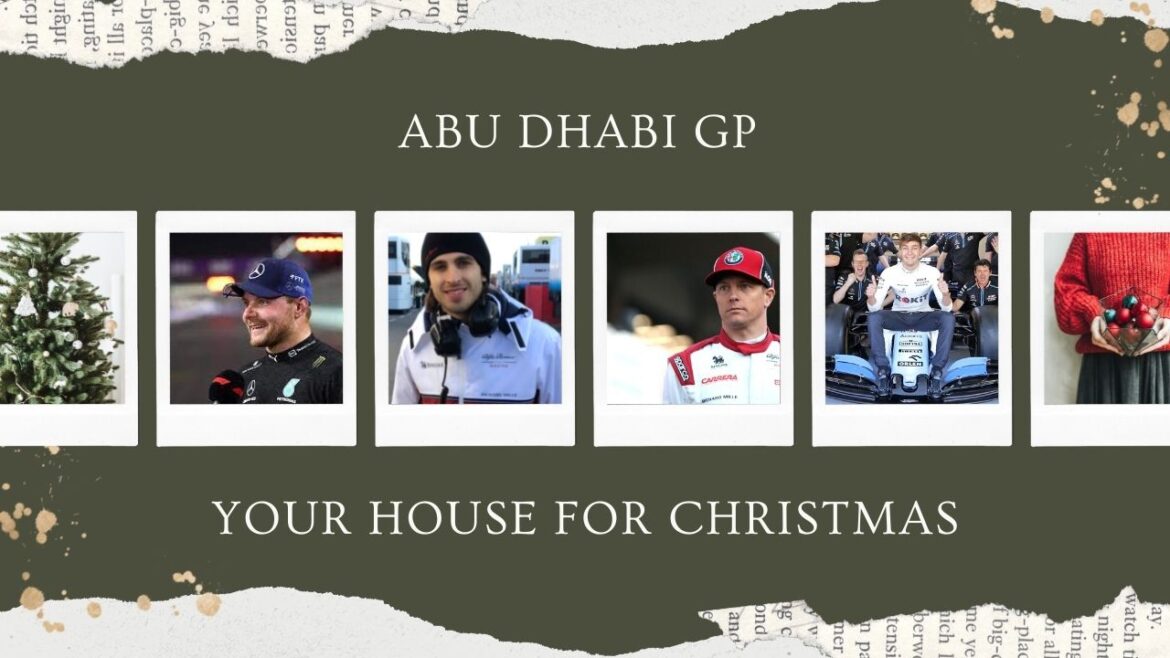 Abu Dhabi Gp, the final round of Formula One World Championship is well and truly began. We are witnessing history after Prost and Senna days. F1 2021 is exciting. Max Verstappen and Lewis Hamilton are tied on points at the top of the championship. It’s the iceman’s last race as well as he retires from F1 after an awesome career. It can’t get better than this as we settle in for an awesome finale of the Abu Dhabi Gp.

Lots of tweaked liveries/helmets for the final race of the season. Alpine running ‘El Plan’ on its rear wings, Alfa has tributes to Kimi and Giovinazzi, Merc running a thank you message to Bottas on its cars and of course, McLaren’s revised art design.

Pirelli has given the teams the softest three compounds for this race, softer than they had in Saudi Arabia. That’s the same allocation they had for Yas Marina last year for reference – but how will those tyres cope with the new track layout?

The action gets going immediately, with Charles Leclerc heading out with large aero rakes fixed to his rear wing. Hamilton is also keen to get going immediately. Sainz is the only driver yet to head out, with everyone else keen to leave the new track layout. So far it is a mixture of all three tyre compounds – with the title contenders both on the softs for their first runs.

The early times are coming in, with Hamilton on top with a 1m 27.148s. That is quite significantly faster than the old track layout, with last year’s pole a 1m 35.246s.

Ten minutes into the session, and Hamilton is back on top having lowered his time to a 1m 26.290s, two tenths ahead of Verstappen in P2. Perez has started brightly for Red Bull and sits third. Often the Mexican takes slightly longer to get up to speed than his teammate, but the early showing here is positive for him.

Aitken is running in place of Russell in this session and so far has given a good account of himself on the soft compound tyre, P15 as it stands. The form of Williams hasn’t been stellar of late, but Russell certainly will be going all out on Sunday to score points in his final race with the team.

The track becomes much quieter all of a sudden, with just the Ferrari pair running at the moment. Leclerc has set a lap time, albeit one only good enough P14. The rest are in the pits for a quick debrief before bolting on their second set of tyres. Nearly halfway through the session and things have livened up out there. McLaren has split strategies, with Ricciardo out on the medium compound, and Bottas has just bolted on some fresh soft tyres.

Hamilton is off on his flying lap and shaves a couple of tenths off his personal best through the first sector. he’s a tenth off Verstappen in the middle sector, but a poor final sector proves costly and while he improves, he stays second.

The sun is dipping lower in the sky, with this session set to be run at dusk. Representative of what the conditions will be tomorrow for qualifying and on Sunday for the race, FP2 is the most important practice session of the weekend.As for the conditions, the track is a full 10 Degrees Celsius cooler than it was earlier, while the air temperature is down to 25 Degrees as it stands, it will cool further once the sun sets.

The track is a busy old place at the moment, with every car out and lapping. Norris has just gone top, albeit briefly – his lap time is deleted for track limits at the final corner. With two long straights, this is a track where the tow could be handy and that could bring in the team mates. Thus far, both Bottas and Perez have looked on it from word go and they’ll need to be if their respective teams want to use them strategically.

Spekaing of Bottas he just kissed the the armco barrier out of Turn 14. While Latifi has a spin a corner before as 40 mins left in this Abu Dhabi FP2 session.

Alonso is another diver sporting an onboard ‘helmet cam’ this weekend,it looked quick onboard, and it was quick according to the timing sheets. Alonso has just gone second on his first flying lap on the softs, with a 1m 24.272s, just 0.146s shy of Hamilton. Lap time deletion is getting a big problem here.

Sand Bagging and Sand Bagging is the Mercedes and Red Bull showing their full hand here? They won’t be running truly low fuel – they’ll save that for qualifying tomorrow. That’s been shown by Ocon just beating the lot of them to go P1.

Hamilton returns to the top of the timesheets with a 1m23.691s. The seven-time champion is the first driver to dip into the 1m23s bracket.Just a quarter of an hour to go for Friday running, and everyone is out on track apart from Alfa. Verstappen is running eight-lap old soft tyres, but Perez, Bottas and Hamilton have all swapped back to the medium compound.

Just as the session starts to wind down, the cameras pick up a rather destroyed looking Alfa. Raikkonen confirms he is okay and has jumped out of the car in spritely fashion, but that car is not in good shape.

There is little to choose between the title rivals in truth, with neither likely to be showing their full hand just yet. Mercedes appear to have a slight edge on single laps, Red Bull on race pace.