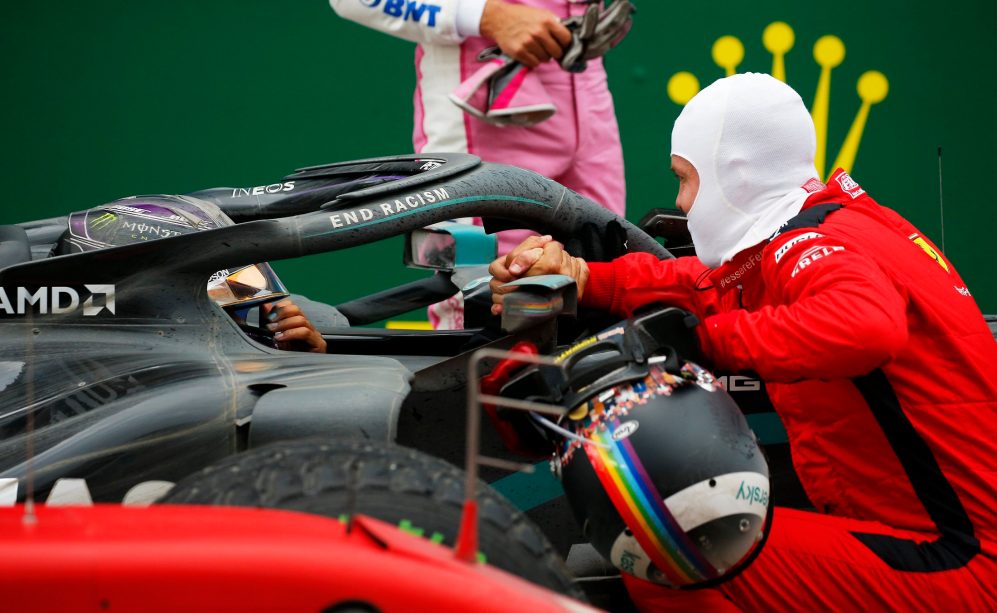 Parc Ferme, a period in race weekends where the teams actually lose their cars. In this section, we explain what is Parc Ferme and why it is worth explaining.

The literal translation in french is “Closed Park”. A designated area in the pit lane generally under the podium that is closed of to the teams. During this time the cars cannot be accessed by the teams and it’s under the jurisdiction of FIA and the scrutineering team. There are two Parc Ferme flavors over the weekend. Pre Race Parc Ferme and Post Race.

Pre Race parc ferme basically is defined by the scope for the teams to alter and adjust the cars. it is very very limited. The teams can repair and prepare the car but cannot fundamentally alter the car under the pre race conditions in the article 34.6 of the Sporting Regulations.

34.6 A Competitor may not modify any part of the car or make changes to the set-up of the suspension whilst the car is being held under parc fermé conditions. In the case of a breach of this Article, the relevant driver must start the race from the pit lane and follow the procedures laid out in Article 36.2.

In order that the scrutineers may be completely satisfied that no alterations have been made to the suspension systems or aerodynamic configuration of the car (with the exception of the front wing) whilst in pre-race parc fermé, it must be clear from physical inspection that changes cannot be made without the use of tools.

The Pre-race conditions kick in as soon as the car crosses the pit lane exit on Q1 and stays on until the start of the race. Any car that doesn’t take part in Q1 will be placed under this rule at the end of Q1. Remember Williams in Azerbaijan GP. Cars that finish Q3 will return to Parc Ferme instead of the garage. That’s why all ten cars line up after the top 3 in Qualifying.

The F1 cars are a diva in its whole right. They can’t withstand too much heat or cold. So three mechanics are allowed in the area with doing shutdown jobs and fitting cooling fans to break duct and airboxes. One scrutineer is assigned for each car so as to oversee the mechanics and to stop them from tampering or altering anything in the car.

On other days, it’s a more involved process than that, when the car has crashed heavily in qualifying, requiring a corner – or more – to be rebuilt. A damaged part can be repaired, or replaced with one that is ‘the same in design and similar in mass, inertia, and function to the original’ – though as is the case with any other parc fermé job, it’s expected to be done around the car and under the watchful gaze of the assigned scrutineer.

Repairs and replacements are detailed in the technical delegate’s report which is submitted to all teams an hour before the start of the race. In Monaco, Charles Leclerc required so much work that the report dealt in generalities rather than specifics: ‘rear wing assembly, right-hand side front corner assembly, etc.

The biggest caveat to the parc fermé rules occurs when the weather changes – or, at least, when the weather is widely expected to be changing – usually from wet to dry or vice versa. Race Control will use the messaging system to declare a ‘change in climatic conditions’, at which point the parc fermé regulations are liberalised a little, allowing teams to make changes to their brake and radiator ducts and cover/uncover pitot tubes.

After the race finishes any car that crosses the checkered flag or completes 90% of the race should go through parc ferme. The victory isn’t truly the teams until the scrutineers sign-off the cars as being compliant, and the stewards publish their final race result. While the cars are still held under these conditions, nothing is confirmed.

This is where any penalties and investigation after the race and many other result affecting enquiries are mostly applied. it typically takes a couple of hours after the flag, longer if there’s a particularly thorny decision. But in 2021 though a deeper inspection of one car at random means the conditions of these teams alone will extend late into the evening.

4 thoughts on “What is Parc Ferme? The Novelty Explained.”