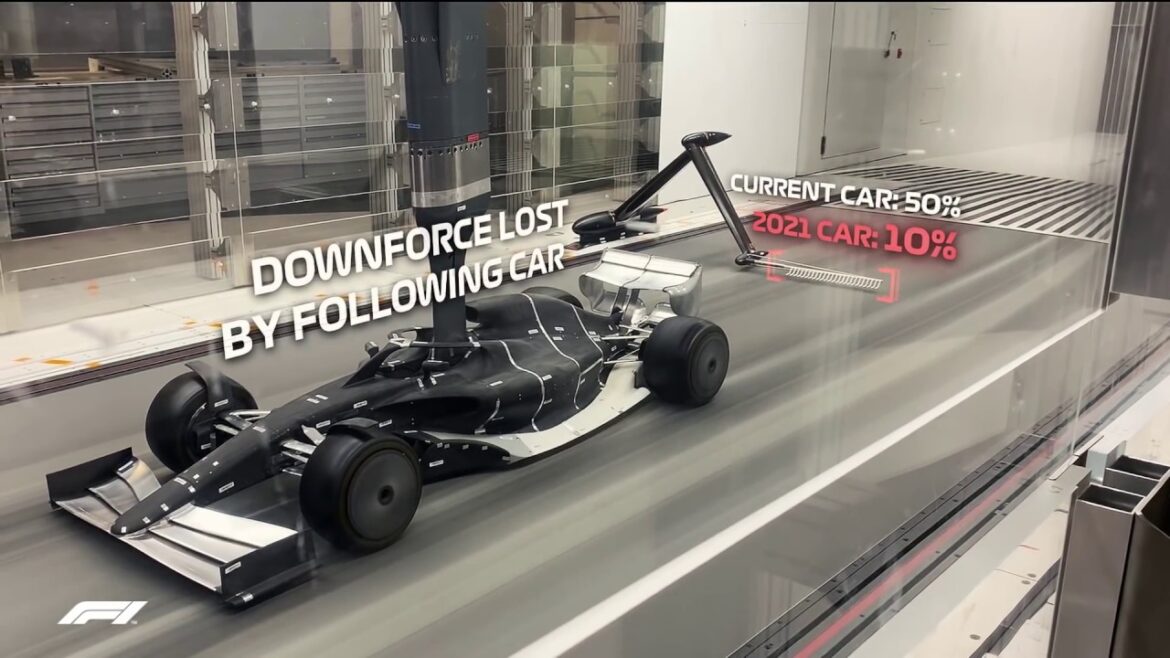 Wind Tunnel and Aerodynamics are so important in Formula One. As more downforce gives the car more grip on the corner and less drag in the straights making the car faster. In this section, we look into how Wind Tunnels work and what the new rule changes entail.

Developed for the Aero Industry, Formula One has adopted One of the main tools in developing areo dynamic efficiency in the car is the Wind Tunnel. Basically, a chamber with fans to create the wind to recreate the track conditions. You may ask why not run the cars in the test circuit. The Sporting Regulations of the FIA, Limit the running of the cars for testing. So to improve the car and test out the new parts there is a need for models and Wind Tunnels in Formula One.

Any feedback from the driver or Performance need is but down on the Upgrade path. The ideas are sketched roughly by hand by the engineering department and a computer model is generated. This computer model is run through airflow simulations to analyze the effectiveness. Then this model is 3d printed and stuck onto the model car in the Wind Tunnel to see if the desired results are achieved.

The CFD’s or Computational Fluid Dynamics and the Tunnel results are then compared to see if the Upgrade does have a desirable effect. In the real-life, as the car goes along the track, it moves through the air. In a Wind tunnel though, the air is moved through the car. To simulate the road the Wind tunnel uses a rolling road to create a track-like scenario.

Whereas the real chassis is carbon fiber, the tunnel model is made of a solid aluminum spine where the parts to be tested can be 3d printed and attached. The Model is packed with sensors and used to gather data in a test run. The model has some automation to change the ride height and other areas of the car. This helps the model to be realistic of the car on the track which has bumps and undulations in track. The real size model of the car cannot be used and only a 60% scale model should be used. The speed is also limited to 50m/s that is roughly 110Mph

After each testing huge volumes are data are collected and analyzed. It all helps to build a picture of what flow is doing and based on the measurement decide a concept or an upgrade. Once the data is relevant and desirable it is then sent to the tracks.

In tracks, they don’t put it in the car and run the race. They are first to run in free practice sessions, more often you find cars running flow vis paints and Pitot Tubes and aero rakes on the back of the car. Then the data from these runs are analyzed and compared with the Wind Tunnel results and decisions are made.

FIA is concerned about the number of times the big-budget teams are exploiting the Wind Tunnel. In the cost cap era, FIA decided to stop full-scale models and limit the model to 60% of the size of the car. There are other restrictions to reduce the costs. Teams are now allowed to use only one Wind Tunnel and can’t run faster than 180KPh.

With cars hitting a top speed of 370Km/h on the straights it is impossible to simulate the conditions 100%. The data may be scaled to the appropriate amount but other external factors like turbulence in airflow and others unknown can’t be considered.

Before the new rules that came into effect this year, teams had several Wind Tunnels and testing was done quite literally 100% of the time. Since the upgrade path of the car is year-round. Now though, there is also a time limitation on how many tests a team can perform from the 2021 season. The number of runs that the team can perform now depends on their position in the Constructors Championship.

It is hoped that as well as reducing costs and making both individual teams and the championship more sustainable, it will also create a more level-playing field that should lead to more competitive and unpredictable racing. But it’s not only about the time but also about the way the teams use it.

Suggested Reading: What is Parc Ferme? The Novelty Explained.