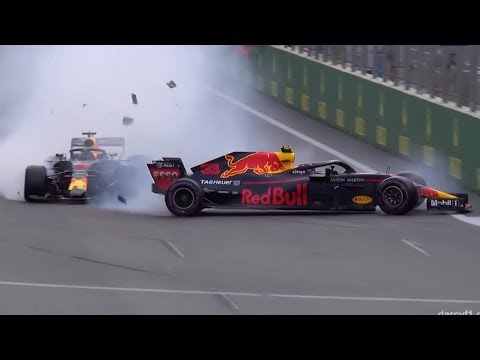 The Second Street Circuit of the Calendar, Baku Gp is one the most interesting, new, and exciting venues. In this section, we see the track, the expectations, and many more.

The highlights of the Circuit are the 2.01 km long straight and the tight castle section in sector 2. The longest straight in the calendar is the mecca of slipstreaming and the width of the track before turn 1 has room for 3 cars. A mixture of wide and open and tight and twisty. The action often looks more IndyCar than F1. However from there, the track loops around into the city’s narrow, winding Icheri Sheher old town, dramatically wending past Baku’s medieval city walls. As in Monaco, the slightest mistakes are punished quickly and severely.

To get a good lap time around Baku Gp you need a good exit out of turn 16 to get a good run to the straights. Generating temperatures in front and back tires are critical since sector 2 has some slow corners and tight sections. The Baku Gp straight line has resulted in Bottas setting a whopping 378km/hr in the speed trap in 2016.

Mercedes after a shitty weekend in Monaco will have a powerful comeback as they are the favorites here in Baku. In Baku, the straight-line speed of the car is so important and Mercedes is on top in raw speed. The Flexi wing of Redbull will make no difference as the slipstream effect is so strong.

Sergio Perez will have to prove he’s worth his weight in Gold either by Out Qualifying Max Verstappen or by playing the team game. Redbull Racing wants Perez to be no less than 4th in the Qualifying so they can decide on the strategy with Perez in mind.

Mclaren who has the Mercedes Engine has a good chance of shining here. Though Lando Norris is in Top form, Ricciardo is nowhere close to playing the team game. So Baku Gp is where Ricciardo could win back his confidence and carry along with the momentum. But will he be so?

The 5 race honeymoon for all the newcomers has come to an end. So if any driver or any team is not up to the mark in the upcoming two races it is going to be difficult for them for the rest of the season. It’s Sainz, Ricciardo, Alonso, Vettel, and Sergio to prove their worth.

Taking of Sainz, Ferrari is expected to be in the midfield behind McLaren as the raw pace and performance of the car is not in the league as the top runners and McLaren. Ferrari with its strong show in Monaco is expecting to trump McLaren by strategy and team game.

Unlike in 2019, this year’s Azerbaijan GP will see the drivers use the softest tyres in Pirelli’s F1 range: C3 (hard) tyres, C4 (medium) tyres and C5 (soft) tyres. This is one step softer than the last Azerbaijan race and the same allocation as Monaco.

Pirelli’s head of F1 and car racing Mario Isola explained: “The reason for this nomination is that the hard wasn’t used at all in the Baku race in 2019, whereas the medium was used extensively. By re-aligning the nominations, we hope to see all three compounds playing an important role and leading to some different strategies.”

Plenty of Sunshine and wind up to 35 mph on Saturday. This will affect the aerodynamic compromises made in Baku can be compounded by the often windy conditions. Higher track temperature will reduce the tire life even more since the C5 is the softest of them all.

5 thoughts on “Baku Gp 2021- A Powerful Comeback for Mercedes is in the Cards-Race-Preview.”