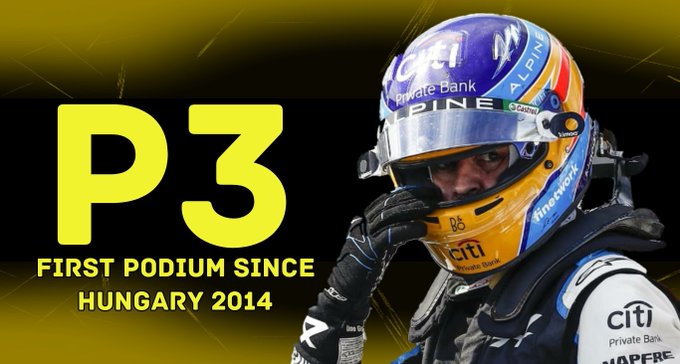 Qatar Gp, Round 20 of 21 of the Formula One World Championship comes to Losail International Circuit. It’s Lewis Hamilton who reduces the advantage to Max Verstappen and after a double pit destroying Perez podium chances, Alonso keeps the last Podium Position.

Even before the start of the Qatar Gp, fireworks were on, as Max Verstappen, Valtteri Bottas, were handed grid penalties for ignoring the double waved yellow flags in Qualifying. In Qualifying Tsunoda crossed the line to go eighth – but Gasly never made it. He ran wide in Turn 15, damaging his front wing which in turn punctured his tyre. Momentum carried him round the final corner, but the team swiftly instructed him to pull over and stop on the main straight, short of the line.

That led to a period of waved yellow flags, some single, some double. With seven cars still on hot laps, it seemed qualifying was done and dusted, and to be fair to Hamilton, no one had sector times that were remotely close to beating him out there.

Lights out in Qatar Gp

Hamilton gets a great start and heads down to Turn 1, but Alonso and Gasly are squabbling behind. Those two continue to squabble through the first few corners, but what’s this? Verstappen is already up to P4. Replays of the start show that Verstappen got a great launch from the clean side of the grid, picking up a place in the first few metres. He then drove clean past Sainz, was aided somewhat by Norris running wide and from there, came close to picking off Alonso too.

Well, that didn’t take long. Verstappen is back up to second, as he manages an easy move on Alonso down the main straight. He is back to second and has 4.2s to make up on Hamilton. Behind, Perez has picked of Tsunoda and is eighth. Those Bulls looking good in race trim here.

Tsunoda and Raikkonen have had enough of their soft tyres, they have both been in for a set of the medium compound.

As Perez picks off Norris for P4, Max Verstappen pits, it’s a very quick one too, to make up for the fact the Dutchman had a bit of a scruffy entrance to the pits. And it is the hard compound – now that’s interesting. That opens up a one-stop race for him. He returns in second place.

But Mercedes want to mirror Red Bull here, so they pull their man in next time around. It is also the hard compound for the reigning world champion, a decent stop and he comes out in the lead of the race.

The pit stop window is well and truly open, as Perez pulls in next time around. His stop is slower though, he loses half a second there. Hard tyres for him too, and he returns in P12. Hamilton’s lead has stabilised after that pit stops at 8.3s. Comfortable, but certainly not done and dusted with more than half the race still to go.

So it is Hamilton from Verstappen and Bottas – but he hasn’t pitted yet. Neither have Sainz and Leclerc who are next down the road, but Alonso in sixth has already stopped.

Drama for Bottas in Qatar Gp

No, the Finn has a puncture! He radios to tell the team and skates wide into the gravel. He is trying desperately to make it back to the pits but has half a circuit length to go. He’s also dragged some gravel back onto the track with him. Bottas has made it into the pit lane, wobbling around the sharp pit entry. He gets a set of hard tyres, a new front wing and is down in P14.

That has promoted Perez to the podium slot, and Alonso to fourth. Considering how things were looking an hour before the race, this one really has come back to Red Bull tonight and as a precaution Everyone in the for the second round of pits and bolted Mediums as a precaution.

And its puncture after puncture for Norris, Latifi and Geroge Russel all suffer a puncture. Alonso holding on to dear life and asked to stay off the curbs.

Well, that didn’t last long. Ocon didn’t get his elbows out, there wasn’t much of a roar there as Perez squirts past – but the Frenchman does do his best to come back at Perez through Turn 3. A whimper more than a roar, but on those tyres, the team couldn’t expect much more.

He did that from start to finish and was never troubled out there. Verstappen comes home second and gets the fastest lap bonus point to limit the championship damage, and here comes Alonso for his first podium since Hungary 2014

Perez is fourth, Ocon fifth on a great day for Alpine, Stroll is sixth and then comes the Ferrari pair. Norris was ninth, Vettel P10 and Gasly was a disappointing P11.

3 thoughts on “Qatar Gp, “Tell Ocon to Defend like a Lion””