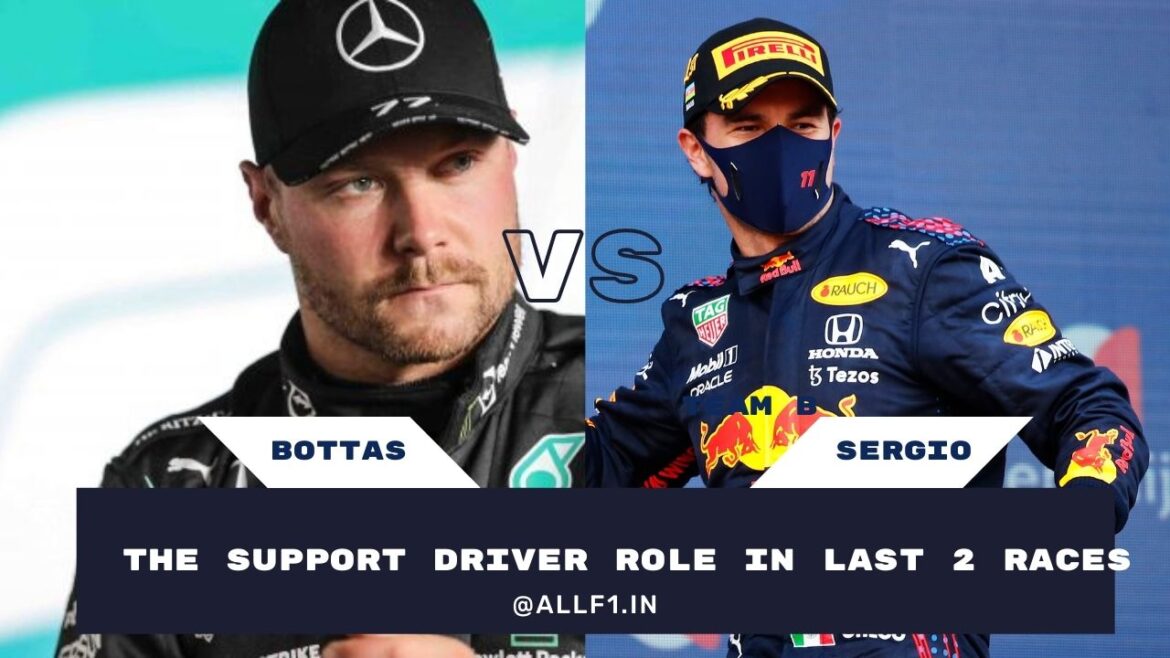 With just 2 races to go, the Support driver equation comes more than to play as creating an uncomfortable situation for the other camp drivers is the major part of the equation. Even a point for the fastest lap will make all the difference in the world. In this section, we look into Valtteri Bottas and Sergio Perez.

With Valtteri Bottas, questioning the recent hurry up call in Qatar GP and Lewis Hamilton enquiring where is Bottas where is he in Brazil Gp Mercedes is clear on what Bottas needs to do in his support role. But he seems absolutely not willing to play the team sport.

Bottas is just replicating what Mercedes has done to him years and years and race after race. “Turning their backs to him” but Valtteri is a professional racing driver and he needs statistics for his career. The support driver also said to the Finnish media that the car Mercedes gave to him in Qatar GP is nowhere fast compared to Lewis Hamilton.

Mercedes can’t rely on Valtteri Bottas, at this moment now but he will be talked to for his support driver role, but whatever he does he will do it out of compulsion not because he wants to.

Sergio Perez as a support driver.

And with two rounds of the season to go Red Bull’s plan is delivering, with Verstappen eight points clear of Lewis Hamilton at the top of the drivers standing while Red Bull trail Mercedes in the Constructors’ by only five points.

Perez has long since been out of the title picture, so his only focus is to support Verstappen in every possible way, something which he is perfectly happy doing.

“It’s part of the game, Max is the one fighting for the championship, and I have no problem helping him,” he told Canal Plus. It’s in everyone’s interest. It doesn’t bother me. He also gave an idea of how he is adapting to the win in the car and how excited that the team is competing for both titles this year.

But Sergio just got the hang of the car and it still doesn’t have a good Qualifying pace compared to Bottas that is limiting his role as a support driver this year.

Though they play no part in the championship fight and will not do anything out of the ordinary for Mercedes and Redbull. But when it comes to on-track passes they will not fight more. Remember when Pierre Gasly let Max Verstappen through without the DRS in Qatar Gp

Meanwhile, Redbull and Honda are fiddling with the throttle mapping to give Max’s car advantage and it has been testing its pattern over Gasly car in Qatar GP and he was faster by 7Kms per hour through speed trap than Max Verstappen

The same can’t be said to Mclaren who will put up a fight against Hamilton because they are so behind on points from Ferrari that every point and every place counts. This might not be a hindrance for Drivers championships but for constructors championship, it is extremely important.

Both Lewis and Hamilton are on their own to defend for their championship, but there is a chance that these two support drivers will play an integral part of the constructor’s championship and a little to no effect on the driver championship in the last two races. Game on!