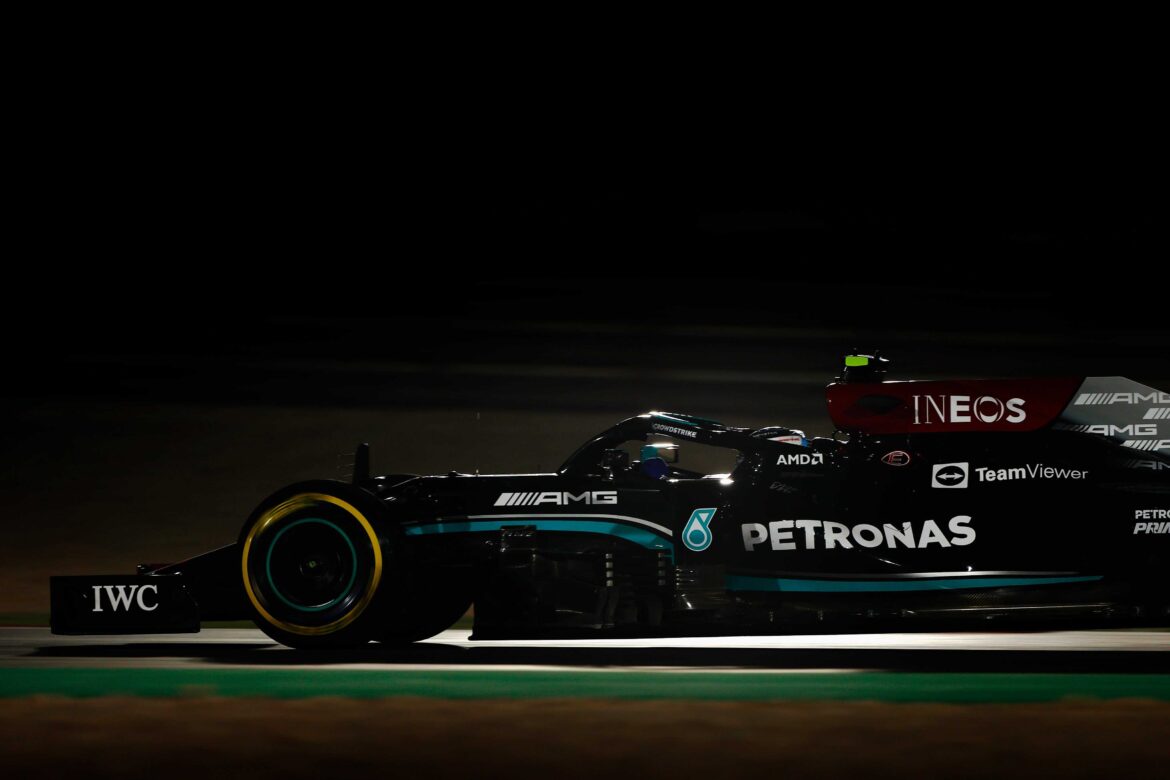 Qatar Gp Qualifying started with all eyes on Redbull and Mercedes rear wings as these is the talks. With Sky Sports F1 commentators playing devils advocate, the session threw no surprise as Hamilton pips everyone by .5 sec as Verstappen slots in P2 behind is Bottas and Gasly in 4th.

In this section, we look into the the highlights of how it went down in Qatar Gp Qualifying

The sun is starting to dip lower on the horizon as the clock ticks down towards the start of qualifying here and what a session it could be.So far, it has been advantage Valtteri Bottas. The Finn has been on a stellar run of form of late, and in topping both FP2 and FP3, has proven his car is quick in both the full glare of the sun, and the cooler night time conditions.

Only Gasly is on the mediums so far, everyone else heading straight out on fresh softs. More issues for Mazepin out there, who looks to have a damaged front wing out there. Bottas slots into fourth as Verstappen goes second but he is two tenths off here. Still, that’s closer than in FP3, and he’ll certainly find more time as the session progresses. That being said, so will Hamilton.

The soft tyres are holding on quite well in the cooler temperatures as shown by Bottas going top on his second flying run. He slots into P1, just 0.003s ahead of Hamilton. There really isn’t anything in it here. The top 3 seperated by 0.02 secs.

Mr.Saturday goes P10 with 2 mins in the clock, its going to be touch and go. but he makes it by a skin of teeth. Latifi drops to P15 and won’t get another lap here so might have a nervous wait. Vettel goes sixth as the track continues to ramp up, here comes Leclerc he does enough for P13

So 15 minutes now stand between the drivers and a spot in Q3. And for Gasly, he doesn’t have much in the way of medium tyres left for either this segment or the race tomorrow, having run two sets in Q1 so in softs. AlphaTauri have both drivers on the softs, and Russell is also on the red-marked tyre. Everyone else so far are out on mediums, with Alpine and Aston Martin sitting out these early exchanges.

Ten minutes to go and the times are coming in, with Sainz quite a way ahead of Norris in the Ferrari – McLaren fight. Four tenths between those two at the top. But here come Mercedes – and it is Hamilton to the fore. A 1m 21.682s for him beats his team mate by three tenths. Max Verstappen splits but here comes Gasly in P2 with softs in Qatar Gp Qualifying.

Perez might have to bolt on some softs here, so is Lando and Riccardo too needs a run. Mr.Saturday is struggling, stays 13th. Eveyone is out as the final stages in Q2 in Qatar Gp Qualifying

Ricciardo is out, so it is all eyes on Perez here as the only driver who can save themselves, and he can’t do it! With Perez out it is two versus one at the front! Max Verstappen race has become super hard.

Hamilton is on fire already, quickest of all in the first sector. But Bottas a couple of corners back matches that! And Verstappen has gone one tenth quicker. Verstappen two tenths up in the first sector, but he loses two tenths to Hamilton in the middle sector.Hamilton crosses the line to grab P1 with a 1m 21.262s. Bottas can’t match that and neither can the Max. Verstappen’s tyres looked like they went off through the final few corners, and he winds up two tenths back.

So it is Hamilton from Verstappen from Bottas And that is advantage to Mercedes on two fronts. No one wants to start on the dirty side of the grid here, with so few support races to grip up that side at all. It’s very slippery out there, with P3 deemed a better starting slot than P2.

Mercedes blink first and send Hamilton out first. He might miss out on track evolution, but he shouldn’t have to worry about traffic. Tsunoda and Gasly are next out, and then Ocon and every one is out with 2 mins to go.

Verstappen shaved the gap, but it was still sizable in the end. Well over four tenths in the end between the title rivals, with Bottas and Gasly sharing the second row. Norris had gone quickly enough in the first and second sectors to jump up to sixth in the end, despite lifting in the final straight.

Gasly picks up a puncture and he was third on the road. He has stopped on the start finish straight, with yellow flags definitely catching out Vettel and Norris no imporves other than Lewis in Qatar Gp Qualifying.