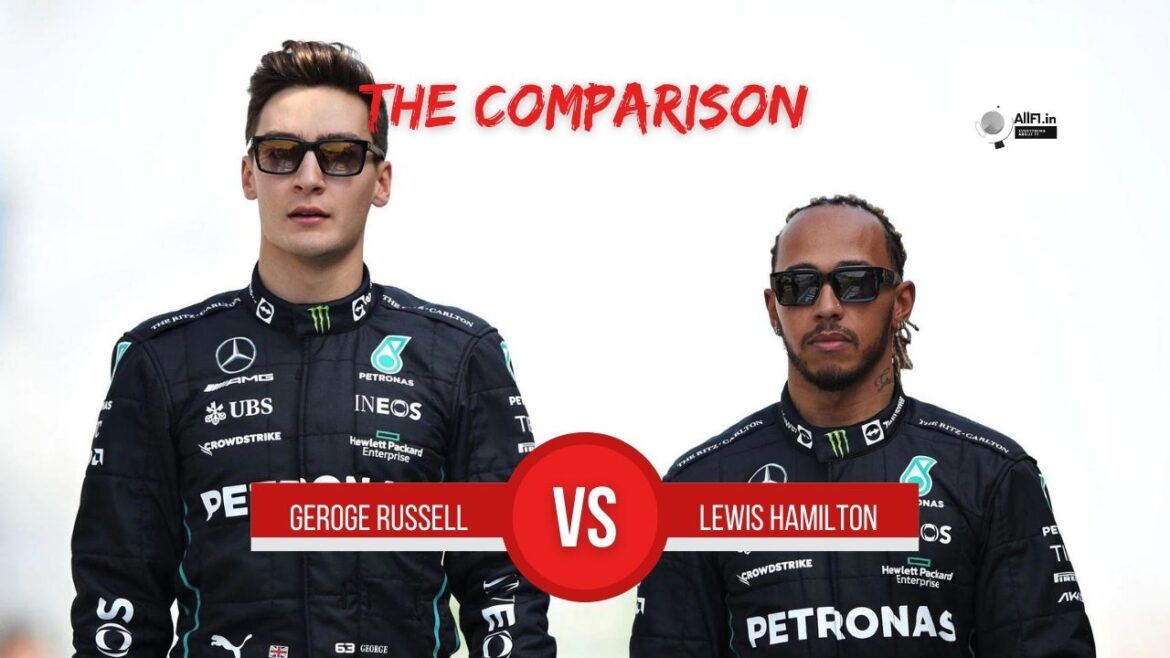 Russell Vs Hamiton is a controversial topic of F1 2022. But off late, the performance of George Russell and Lewis Hamiton is miles apart that a comparison of this sort is inevitable. In this section, we look into just the statistics of the result and refrain from any judgment whatsoever.

Russell has finished in the Top 5 in every season so far and is the only driver to finish every race inside the points in 2022. He has also out-performed Hamilton at most races overall this year, leading the qualifying head-to-head 5-3 and is 7-1 ahead of the seven-time World Champion in race finishes.

Russell leads Hamilton by 37 points as a result, with the younger Briton having earned his third podium of the season in Azerbaijan and has been the victim of a soft tire change in Canadian Gp Qualifying that made him Qualify in 8th with Hamilton up in 4th after a good outing.

Is the Russell vs Hamilton talk only because of Hamilton’s rotten luck or is there something fundamental that Hamiton is missing? Or is it because of the fact George Russell is so good that he has adjusted to the car nicely?. I think it’s both. Lewis Hamiton is a bit of a diva when it comes to setup and car tweaking and after 7 world titles, he has the right to be so.

Races in Russell vs Hamilton

Though in Bahrain Gp, the power deficit to Redbull and Ferrari is evident a podium to the start of the season to Lewis Hamilton was a positive start. But things took a huge turn in Saudi Arabian Gp where Hamiton was out in Q1 and Qualified 16th and Russell was way ahead in 6th. This is the moment everyone thinks that Russell vs Hamilton comparison started.

Setup changes or not it was a woeful qualifying for Hamilton. The race, with the same set-up, was a lot better and he appeared to have a slight edge over Russell in clear air. Australian Gp the strategy was a bit blah in the case of Hamilton while Russell was pitted under the safety car. Hamilton drove the faster silver car all weekend and was only denied what would have been a deserved podium by the Safety Car timing.

At Imola though the Russell vs Hamilton battle is on full force, thanks to the stonking first lap where he overtook 5 places in one lap. This was the first weekend you could say Russell had truly outpaced Hamilton fair and square from start to finish.

Miami Gp was neck and neck Neither Mercedes driver had a particularly brilliant Miami debut but Hamilton would certainly have finished ahead of Russell if not for the timing of the VSC. Hamilton was a sitting duck on his worn tires at the end.

Spanish Gp, this was certainly Russell’s weekend and probably his most impressive of the season. He qualified well and then managed his race to a well-deserved podium, with Mercedes hailing car improvements. Why Hamilton was not able to cash in on his car is due to the setup differences.

Monaco Gp and Azerbaijan was a much better weekend for the younger driver in the Russell vs Hamilton battle.

Is Russell a Better driver than Hamilton?

Now look are we seriously going down this road? In my opinion, George or any of the new generation are hardly comparable to Lewis! They’re firstly at the polar opposite ends of their careers, that’s first and foremost. Secondly, George’s accomplishments are what? Compared to a 7-time world champion? 100 time GrandPrix winner? What has George achieved? Nothing

Is George the future? Yes, 100% you bet he is but is he better than Lewis? Well, maybe he is but also let’s get real here for a second. George may be more talented than Lewis this may be true but we can never know due to fact that this rivalry between them isn’t anything serious unlike what Lewis and Nico had.

Maybe if we see Mercedes return back to the best and the same with Lewis then maybe we might see a titanic battle but in my opinion, even if we did see a battle between them, just my opinion Lewis is 37/38 years old and no offense whilst he might be able to operate at a high level will he be at his peak? I don’t think so. Lewis Hamilton’s best days are behind him and not in front and the same could be said for Alonso, Vettel, and maybe even Daniel Ricciardo.

So that’s my take on it. If anything Hamilton for the next few years or whatever needs to be a mentor for George. George is the future and the no getting away from that. He’ll be the one that’ll carry the Mercedes mantle going forward and less and less will it be Lewis but I don’t like or would never like to say George is better than Lewis because 7-time champion really? Vs someone with zero wins, zero poles, or virtually nothing credible to the name. I think it’s disrespectful.

2 thoughts on “The Bold Russell vs Hamilton Comparison”