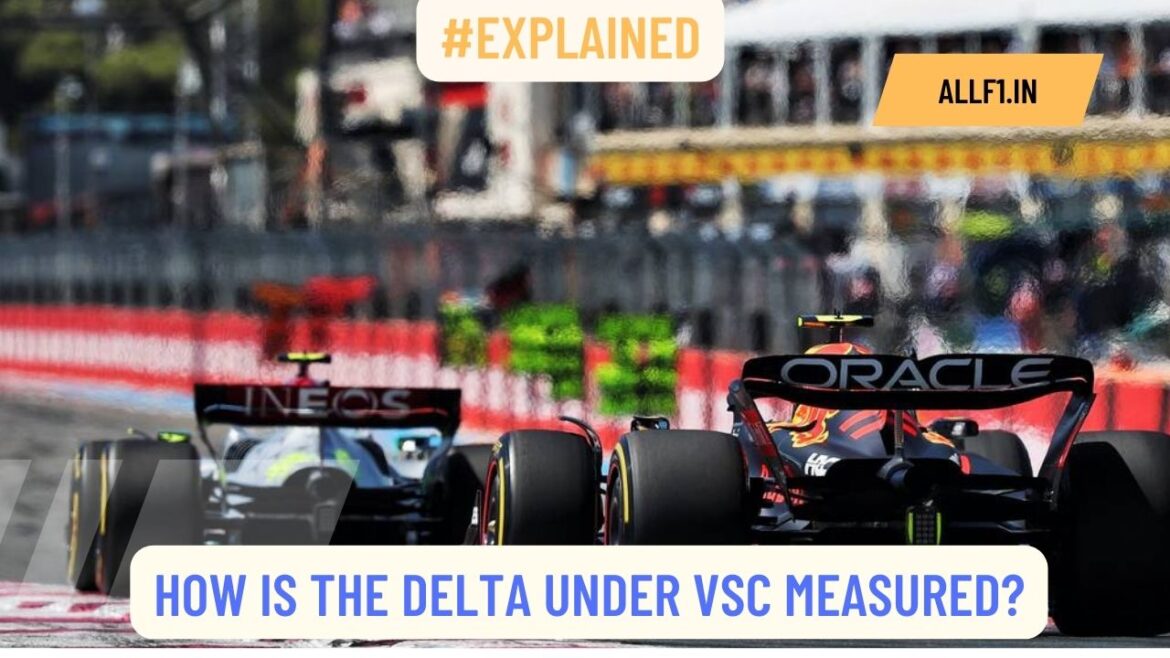 VSC in F1 is a concept that needs a bit of explanation. It’s a bit messy and a bit complex but don’t worry we are here to help. In this section, we look into all things Virtual Safety Car and how it can affect the f1 standings.

When the order is given to initiate the VSC procedure a message “VSC DEPLOYED” will be sent to all Competitors via the official messaging system and all FIA light panels will display “VSC”.

Effectively, all drivers will be told via their displays that the VSC has been implemented, and all the light panels at the side of the track will say “VSC”. Usually, the marshals wave yellow flags and hold out a board that says “VSC” to ensure there is absolutely zero ambiguity.

While VSC in F1 procedure is in force, all drivers have to lower their speed by 40%, and they are timed between marshaling posts to make damn sure they are driving slowly. When the VSC in F1 ends, the message “VSC ENDING” is sent over the system, and after a variable delay of 10–15 seconds (up to the race director) the light panels change to green and the drivers can go racing again.

Why was VSC in F1 created?

The procedure was created after the tragic death of Jules Bianchi at the 2014 Japanese Grand Prix; Bianchi was going perhaps a little too fast for the double-waved yellows at Turn 7 for a stranded car in the runoff, and he lost control of the car in the torrential rain. He went and hit a recovery crane, injuring his skull so badly he would never regain consciousness; he would die a few months later.

The VSC has the advantage of flexibility; it’s quicker to start and end a VSC than it is to use a full safety car. With a VSC, the director simply presses a button and everyone slows down straight away, while a Safety Car may have drivers being relatively rapid in the time before catching the Safety Car itself; calling in the VSC is also way easier, as you simply press a button, wait 15 seconds, and you’re off, whereas with a full Safety Car you have to un-lap the lapped cars and wait until the cars are back at the finish line.

In addition, the VSC keeps the gaps the same, instead of a full Safety Car which eliminates any gap the drivers have built up to the car behind.

Is VSC in F1 perfect?

The VSC is still relatively new, and occasionally the procedure gets tweaked by the FIA in response to drivers’ concerns (including one case where Vettel and Alonso both found a really stupid loophole that allowed them to initially gain huge amounts of time on the car in front).

Vettel during the Spanish Gp in 2018, lost 2 places when he pitted in VSC but he criticized the system for having a huge loophole. Basically, drivers are shown a delta on their wheel for each sector, but they’re allowed to exceed the delta at a few mini sectors – as long as the total average stays below for the sector.

This allows a driver to plan their sectors and mini sectors to reduce the distance to the driver ahead by driving a shorter distance at faster speeds & next mini sector slower by following the racing line and thus positioning yourself for a better attack position while still being below the sector average.

Remember the Perez and George Russel Virtual Safety car f1 2022 incident during the French Gp is the same tactics. Although the VSC threw an error in this case, but this can be used every time by the driver behind.