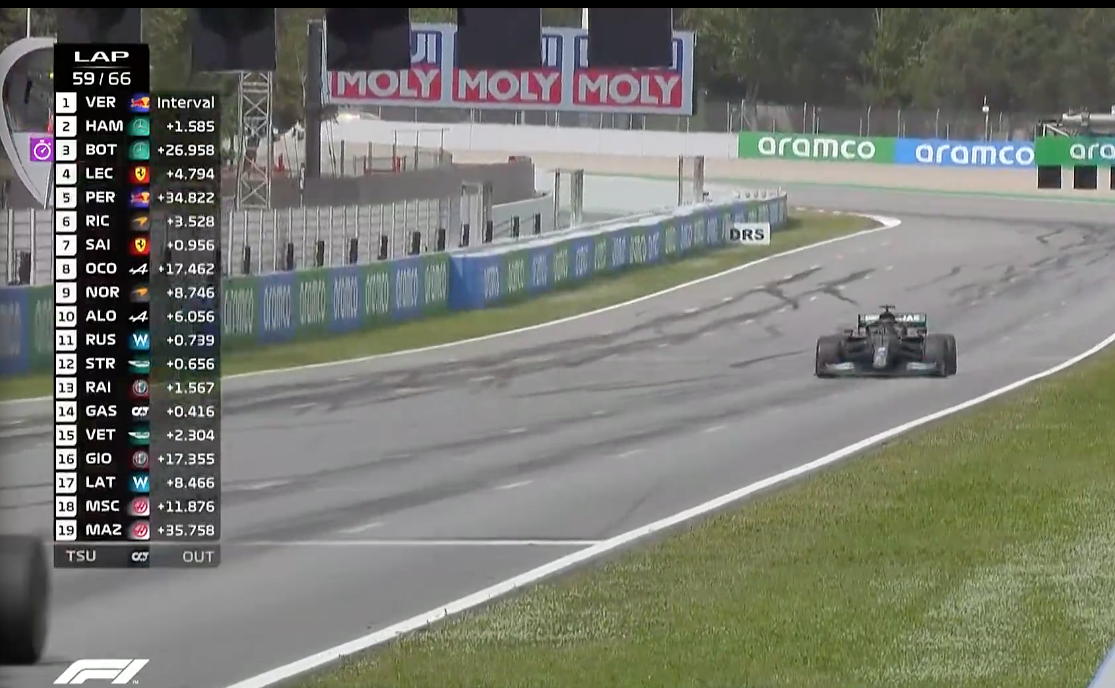 This week, the double-header is heading to Circuit de Barcelona-Catalunya for Spanish Gp 2021. The 4.675 km circuit is one of the iconic tracks in the F1 calendar. Let’s Dive into the Weekend Review for Spanish Gp weekend.

What to know the Track History: Read here.

The Testing Circuit in Practice.

In FP1 things were pretty much normal with Mazepin Spinning, Alfa’s Reserve Kubica stuck in the gravel bringing out the red flag. Bottas was the quickest and Hamilton and Verstappen close behind there aren’t be any surprises in Practice sessions. Everyone knows this circuit like the back of their hands. The Turn 10 changes do nothing to the track time nor improved the overtaking opportunity.

By means of the car Ferrari’s time in the medium is strong and turned few heads. Mercedes is stronger than ever. With an 8 point lead into the championship, Hamilton is eyeing for his 100th Pole, and it’s reachable with his pace. Redbull seems strong but MAX is making mistakes struggling and he is not confident in this track. He can’t get a perfect lap until the last session. The race to Qualifying is tight. Finally, Curb camera housing flew off and punctured Kimi’s Tire

Qualifying is important in Spain Gp. Pole has won 22 of 30 times here. For the 100th time, it’s Sir Lewis Hamilton on the pole in Spanish Gp. An F1 milestone with Verstappen was 3000th of a second behind with Bottas in P3. The race is on for Sunday.

In Ferrari and McLaren battle P4 and P6 for Ferrari and P7 and P9 for Mclaren. A P5 for Occon and P10 for Alonso. Perez, I don’t know if the pressure is getting to him. He just needs to prove that he is worth his seat, again and again, that seems to affect the second seat in Redbull. A Rookie mistake spin in the out-lap puts him in 8th for the Spanish Gp.

With 580 meters to the first breaking point from the pole, it is going to be a tire game and a strategy game for the racing on Sunday’s Spanish GP.

Max made a perfect start and the race is on. Hamilton is breathing down his after the safety car for an Engine problem for Yuki Tsunoda. The DRS window is tantalizingly close but yet too far for Hamilton. Leclerc in 3rd has literally ruined Botta’s Race.

Max pitted when lewis was 0.4 sec behind him. A Slow 4-sec pit stop is very bad at this stage but it might be due to the late call to Max Vestrappan. Lewis came in 5 Laps after and his is a 2.2 Sec stop. In theory, he will have a perfect opportunity in the 5 lap’s time.

Bottas gained a place from the early pit stops to Leclerc and it is a 2 horse at the halfway point in the Spanish Gp 2021. The Second pit calls just put the race on the grill with the new tires Hamilton is flying at a pace that is 1.17 sec faster a lap than Max Verstappen and he overtook him on Lap 58.

Carlos is having a fantastic race to 7th and Charles in 4th is good for the 3rd place fight to Mclaren. Russel left out of the points as well for another time. There was essentially a traffic jam for the 10th place finish with Gasly coming out on top. Aston Martin and Alpine are not up to the mark here as well but after an Eternity the race in Spanish Gp is Finally Worth Watching.