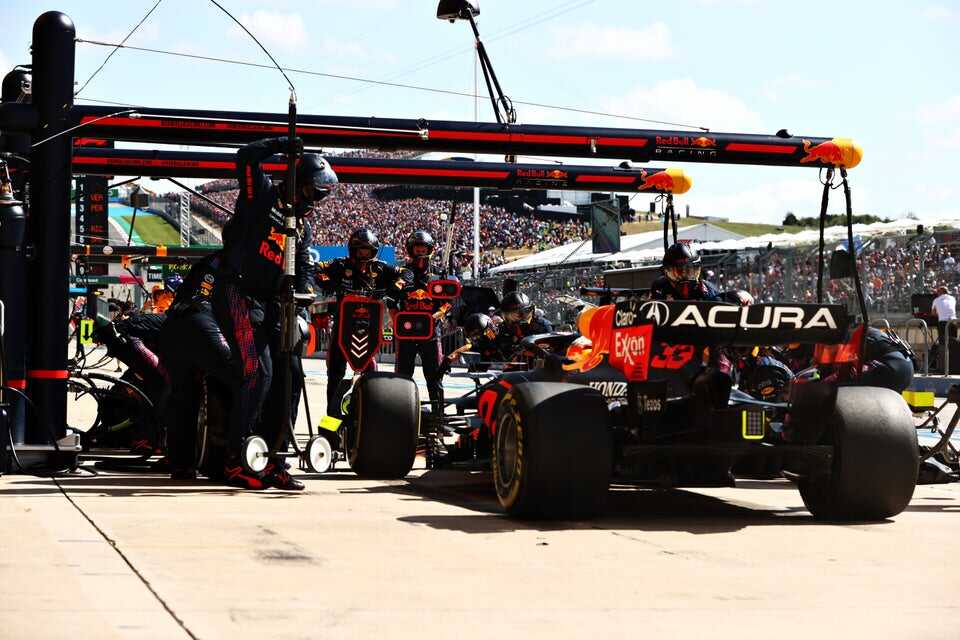 Max Verstappen held of Lewis to win in USGP yesterday. Tyre stint and an aggressive strategy was the order of the day. In this section, we look into the Tyre strategy and how Verstappen managed his lap times to save off enough to attack in the end.

Tyre degradation is the key in usgp, so a two stopper is always faster. Pirelli brought C4, C3 and C2 in their range of tyres. These are high degradation tyres and the soft were never meagerly used all throughout the races. Heating the tyre was not the issue in Austin heat but keeping it in the operating window is what is difficult.

The Stint for the Win in USGP

Everyone started on Medium’s except Sainz and Yuki, The Soft tyre comes to temperature quickly but also fall so quick again. Though Sainz was able to keep ahead of the Mclaren pair, when their medium was up to the temperature, Sainz was mugged by left right and centre. Read more about the battle here.

Alonso was the first of the non-contact drivers to come in to get rid of the Tyres at Lap 7, that too a new set of mediums good enough for another 13 laps. But they want the undercut so they took the gamble and did the gambling payout at the end? we never know as the car was retired at lap 49.

Antonio Giovinazzi was the next to come in on Lap 8 for a used set of Mediums. Why did they come in for a used set when ha has the new set of the same compound running and worth another 15 to 20 laps easy. Vettel took the approach nicely by pitting on Lap 17 going to the used set and hards on the final stint earning him the points in the process.

Verstappen was the podium runner that came into the pits on Lap 10 and went on to a set of hards. This was done to undercut Hamilton. When he was out of the pits on Lap 11, he was putting in times around 2 seconds faster than Hamilton. Lap 12 Lewis time was 1.42 and Max 1.40. Fearing the worst Mercedes pitted Hamilton on Lap 13 and by the time he pitted and was out of the pits, Max was 6 seconds clear of Hamilton.

On Lap 15 Lewis and Max were doing 1.40 and odd paces. The gap is more or less equal as they are into the management phase for their tyres. By Lap 23 for wanting the keep the gap to Hamilton, Max has pushed a little hard and the tires were dropping off the pace. On lap 23 Hamilton did 1.40 while Max did 1.41 sec and the gap kept on increasing as by Lap 25 Hamilton was catching Verstappen by 1 second a lap.

Lap 25 Hamilton 1.40 and Max 1.41.9’s and low 1.42’s. Redbull then, to cover off any surprise and lesson learnt from Barcelona pitted Max Verstappen on Lap 29. Lewis stayed out and went long to have the tyre advantage at the end of the USGP.

At Lap 41 Hamilton put in 1.38 with supposed to Verstappen 1.41, a whopping 3 seconds faster per lap. Maybe this can be due to the traffic and tyre management.

Verstappen knew Hamiltion is coming. Redbull generally was good in sector 2 and Mercedes in sectors 1 and 3. Verstappen was instructed to get a good exit out of Turn 11 to get hamilton out of the DRS zone in the back straight as the straight-line speed of the Redbull is very low compared to Mercedes.

By Lap 51 the gap was 2.8 seconds after a brief VSC for clearing debris on the track. Then came the attack phase from Hamilton by Lap 52 to 55, with backmarkers hampering Verstappen, Lewis was gaining 0.6 sec per sector. Finally, when he is in the back on Verstappen’s dirty air everything falls apart. The Mercedes in the dirty air was sliding.

Max Verstappen during the last two laps 55 and 56 used all the tyres he has saved and stayed ahead winning at USGP by 0.8 secs over the finish line. Max tyre management during the laps 40-55 and the inability of Mercedes to follow in the dirt air caused Mercedes to throw away a sure-shot victory.