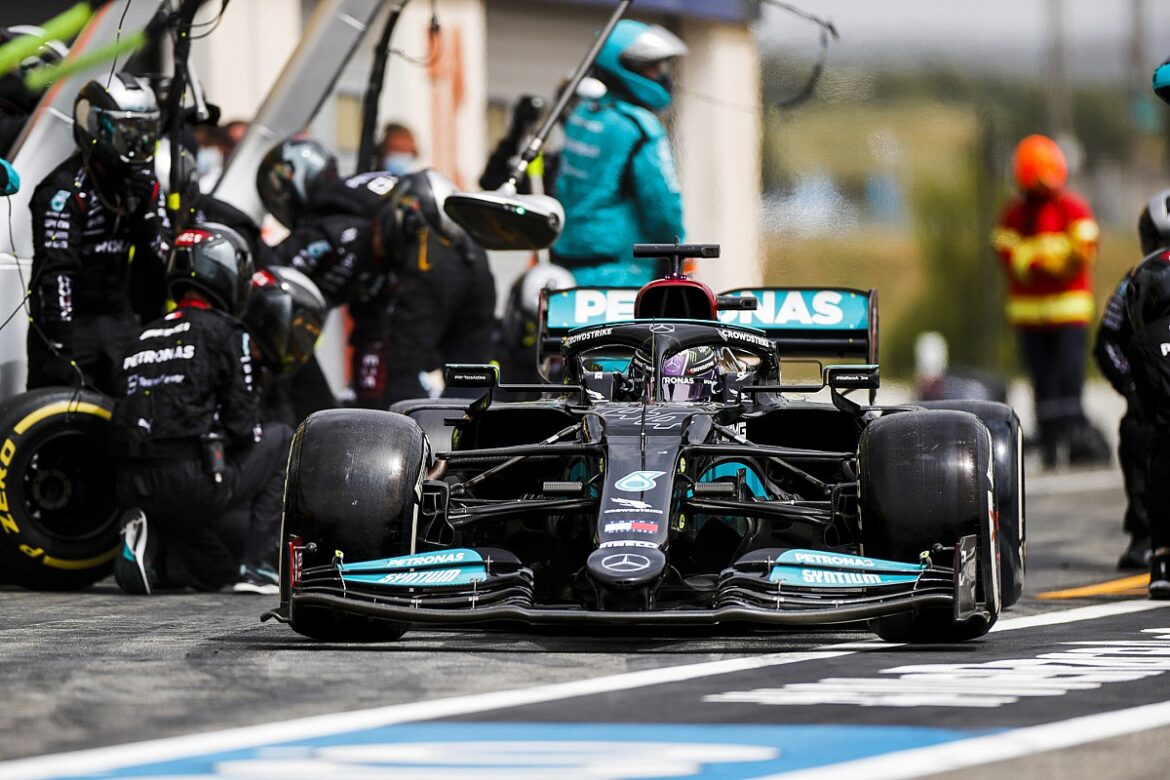 French Gp was a thriller no doubt, But that begs a question will Hamilton have stopped would he have won. In this section, we explain the reasons and clarification why that’s not the case.

Hamilton would have lost irrespective of whether or not he stopped twice, and the criticism of Mercedes strategist is extremely overblown. The decision Red Bull made to stop a second time was marginal. Verstappen caught Hamilton with 2 laps to go and passed him immediately. Basically, that’s nothing and it could have easily gone the other way with something as trivial as Mazepin ignoring a couple of blue flags in French Gp

The average closing speed of Verstappen on Hamilton on the 10 laps up until the pass was ~0.65s. That pace differential roughly translates to Hamilton requiring an additional 8 laps to overcome the 5.25s he would have required. Hamilton was caught with 2 laps to go, so this means that Hamilton would have likely caught Verstappen 6 laps after the chequered flag, and still not have passed him yet.

The Second Driver in French Gp

Basically, Perez would have been in a significantly better position to fight than Bottas was and would have likely cost Hamilton more time (potentially a lot more time) than Verstappen lost passing Bottas. In order for Hamilton to have won on the 2 stop, he would have needed to have driven significantly faster in that 3rd stint than he had shown the ability to all weekend. He’d also have had to pass Perez like he wasn’t there. The chances of all this happening were minimal and it likely wouldn’t have been particularly close.

A reasonable criticism of Vowels is that he should have stopped Hamilton a lap earlier to take away the opportunity for Verstappen to undercut. But even here, Vowels decision was indisputably rational, albeit obviously wrong in hindsight. Bottas was 2.2s behind Verstappen when he unsuccessfully tried the undercut. Verstappen was actually reasonably comfortably ahead of Bottas after his stop.

Verstappen was 2.7s behind when he tried successfully to undercut Hamilton. Hamilton’s stop was 2.2s, faster than Verstappen’s (2.3s) and Bottas (2.5s), so the only other place Hamilton could have lost time was on track, with either him having a not-so-great in-lap or Verstappen having a terrific out-lap in French Gp.

Either way, that wasn’t the strategist’s fault. And we also have to consider that both Mercedes drivers were complaining during the first stint of the tires going off. This was probably a significant factor in Vowels thinking in delaying Hamilton’s stop that extra lap. Why stop before Verstappen when he has every reason to believe that Hamilton is just outside the undercut window?

The French Gp race was clearly going to be marginal on tires, particularly given the information he was getting directly from Hamilton and Bottas, and that extra lap could have made all the difference. What if he stopped Hamilton and then Verstappen ran long and had a big tire advantage at the end? What if stopping had pushed Mercedes into a 2 stop, but a 1 stop turned out to be the correct strategy?

There were risks with both options, and obviously, it blew up in Mercedes’s face here, but that definitely wasn’t solely down to strategy. Sometimes the losing team doesn’t do much wrong, but their opponents just do a slightly better job. That’s what happened in French Gp.

As discussed the only strategy that would have worked is the Undercut working. If Hamilton had come out ahead and Red Bull still switched to the 2 stop, there’s every chance it would have failed. That 2.625s gap was so crucial in the French GP.

One thought on “French Gp – Emergency 2nd Pit stop will not have worked!!!”