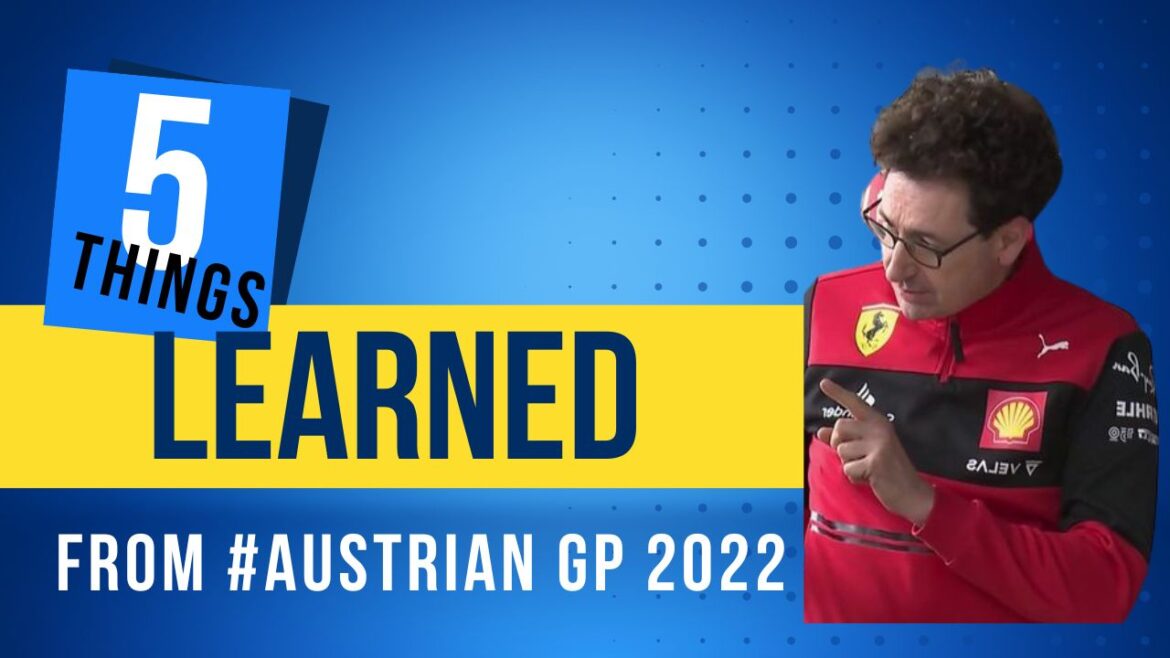 Austrian Gp 2022 after a fantastic sprint race it was Ferrari’s Charles Leclerc who was dominant on track and passed Max Verstappen 3 times on the track to claim victory. In this section, we look into the 5 important takeaways from the race.

Redbull is thought to be strong in Austrian Gp, the home track for Redbull came out second best in the race yesterday. Ferrari’s was matching the straight-line speed of Redbull which was looked up as an advantage many a time in the season. After the Canadian Gp and the rear wing update, the Ferrari is almost equal in terms of the straight-line speed of Redbull. This was evident in the Austrian Gp yesterday.

To Ferrari’s delight, they have found the Achilles Heel of Redbull. Redbull is Rear Limited. When the circuit is Rear limited Ferrari is the more robust car. Rear Limited circuits like Baharain, Baku, Monaco, Montreal, Austria, Singapore, Mexico, and Abu Dhabi. There are the circuits where Ferrari can shine or outrun Redbull.

This has been compounded by the fact that Redbull after the recent updates has gone heavier by 10 Kgs. Redbull is scratching their heads and going back to the drawing boards to fix the rear limitation that even they did not know till yesterday’s Austrian Gp.

With 38 points behind the Championship leader Max Verstappen, Leclerc needs three or four wins back to back to improve his chances and take the fight to Rebull. With an almost 1 and 2 in the bag towards the middle of the race, the ball was dropped when Sainz’s engine blew up.

It blew up and spectacularly went into flames. For Ferrari its the third major damage to the power unit after Spain and Azerbaijan. The issue is likely the same as that of Leclerc in Baku. Sainz is almost certain to start from the back in France since he has already used three engines in this season.

France is too short a time to fix anything for Ferrari, but the summer break after Hungaroring is the time where they can do the Maranello Magic. Let’s hope for the best.

Mercedes has a more Reliable car

There are no upgrades yet after the floor upgrade in Silverstone. But the mood in the team is positive. Having a reliable PU means that they won’t be spending any money trying to “fix gremlins” and can fully focus on an upgrade that will bring performance before the MGU-K and ERS freeze. The indication that Mercedes is moving in the right direction in terms of upgrades means that they can soon enough start bringing parts that enhance and optimize performance. Their target might be French Gp in 2 weeks’ time. But for Austrian Gp, they are keeping hold.

Weakness: Russell’s car built up too much air resistance with a larger rear wing. In general, Mercedes missed some performances. They were too slow on the straights. Perhaps the V6 turbo lost more than the competition at 670 meters but they might expect a podium in all races if reliability problems in Ferrari and Redbull catch up again. Let see.

The Rules implication of FIA

The Rules implication of the FIA over this weekend was inconsistent at best. Sergio Perez’s Quali was screwed. Why was the deletion happening then and there? What explanation will the FIA will gave for this sure-shot question from Redbull?

When there is a track where going over the lines will result in a lap time advantage why not put a gravel trap in those locations. Street tracks are a different question though. The drivers were vocal about it straight away. Lewis called “Bs” from the car for his black and white flags.

Why not do away with curbs, white lines all the way around, and use technology to detect four wheels off, and penalize instantly. Leave the only path for interpretation up to the stewards to determine if the driver was forced off. Make it identical at every track. Tennis for example moved to automatic line out detection with great results. There were 48 lap time deletions in the Austrian Gp Race yesterday.

F1 2022 cars have proved their closer racing abilities both in Silverstone and in the Austrian Gp. There were doubts during the initial stages of the season about this. The F1 2022 car, has been designed based on close racing so the air is disturbed very less in providing clean air to the car following it making the race closer.

This new F1 2022 car, according to the data, increases the downforce of the following car by 95% compared to 35% in the last iteration followed by 20 Mts and 10 Mts there is an increase of 46% according to FIA data shared with the teams.

Sainz did not stop on or close to the track. I thought that was a really smart and aware move from him. He prevented this from possibly becoming a safety car situation and instead left Verstappen and Leclerc with a VSC. It would have been a bit more precarious if there had been a safety car restart. I still think Leclerc would have won, but this was so much cleaner. Let’s hope for the best and prepare for the unknown!