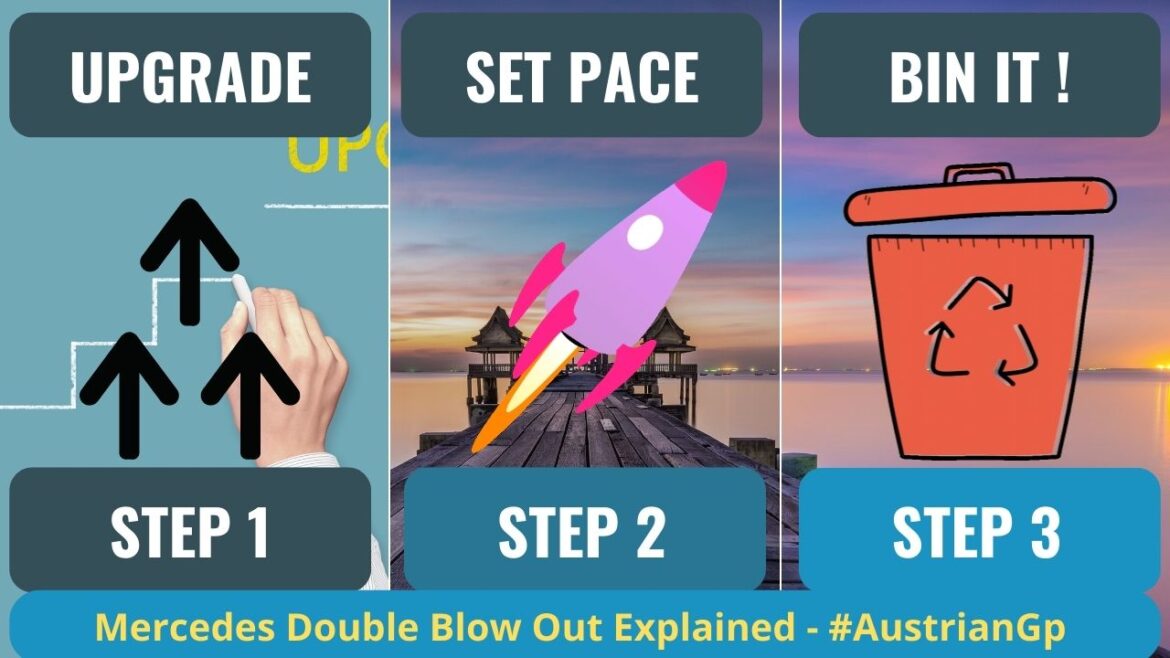 Both Mercedes F1 crashed out in Q3. Lewis Hamilton and George Russell both spoiled Mercedes’ chances of a first F1 2022 front row start. The Crash has reportedly been caused by a setup change to Hamilton’s Mercedes leaning more towards George Russel’s setup. In this section, we look into the details that played a huge role in this Mercedes F1 Crash.

Mercedes after the upgrade in British Gp is racy as ever in this season but they are still marginally behind Ferrari and Rebull but not by much one-tenth probably. With Mercedes downplaying the updates all was revealed in the pace in Austrian Gp Qualifying today.

There were reported changes to Lewis Hamiton’s car before the start of the Austrian Gp swinging towards the George Russell set up to give them a higher top speed on a low drag configuration. Lewis was happy with the setup during the FP1 session yesterday. But regular viewers know there is a known limitation to warming up the tires in this new upgrade.

In order to counteract the same, there is a two-lap run before the push lap to get the tires up to the temperature. During the incident, the oversteer moment came as he turned in the corner at the speed amount of track space used up to correct it simply ran him out of the road and into the gravel.

It might be significant that he was turning across a cross-wind at that point of the track, which would be more of a tailwind the further into the corner he got. There may have been a wind element to Russell’s later accident at the final corner, which came as the car turned into a headwind.

Both a tailwind and a headwind will induce oversteer, albeit for different reasons. In the former case, there is just not enough downforce acting upon the rear wing. In the latter, the front downforce increases too quickly for the rear end to be able to keep up causing the Mercedes F1 Double Blow out.

“I am incredibly disappointed in myself ultimately and so sorry to the team who worked so hard to put this car together and I never like to bring it back damaged. I don’t have an answer. I lost the back end and that was that.”

Lewis Hamilton on the crash

“It’s definitely positive signs, We know we’ve brought things to the car. Lewis was absolutely flying today, I think I probably went in the wrong direction with my setup for qualifying.”

Russell on the crash

We’ve given them a car that wasn’t on par for 10 races in a row and now we’re starting to come to terms and drive in front, it can happen that you just lose the car. I’d rather have a fast car and qualify like this than not have the pace to be in the top four.”

Toto wolff on the crash

Implications for the Race.

Both Mercedes cars have some damage to the gearbox or the cassette, with Hamilton having the bigger one both cars are still on their second unit, so even if there is a need for replacement, there will be no penalties for the parts. But to break the parc-ferme conditions there may be a penalty coming and all penalties are to be taken on the race and not on a sprint weekend.