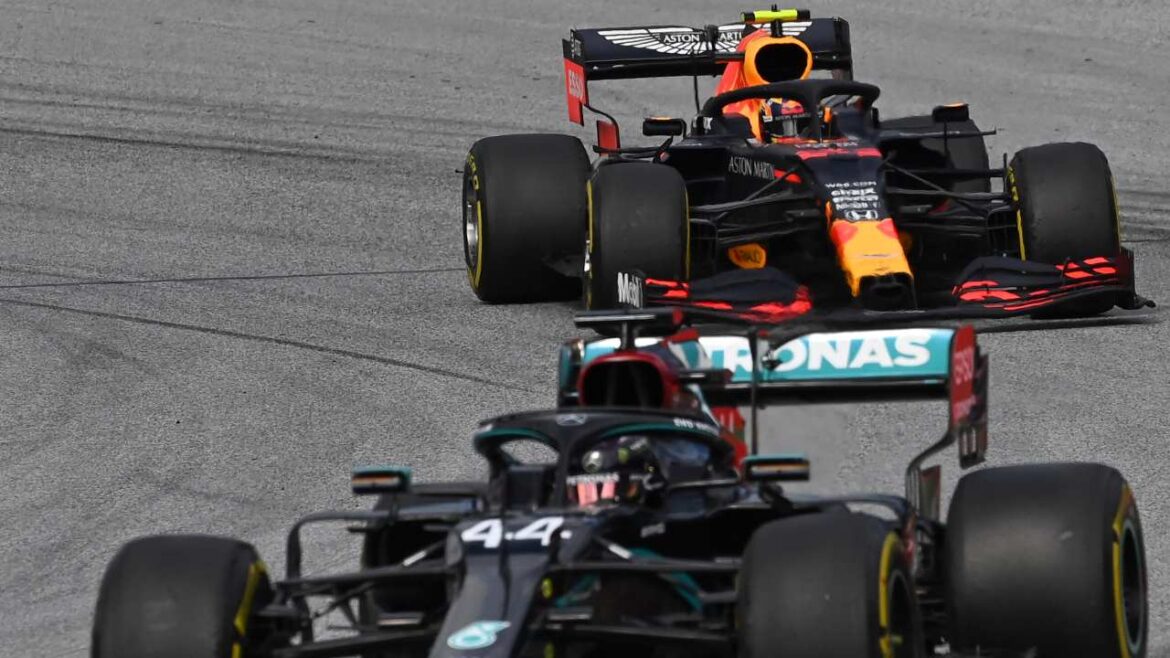 Redbull appeal to the stewards was unsuccessful. In this section, we look at the drama that unfolded before the Hungarian Gp.

Any appeal to the decision of the Stewards can be presented if there is new evidence that could affect the outcome of the decision. Redbull has appealed the 10 Sec penalty of Lewis Hamilton during the first lap incident in the British GP.

Red Bull conducted a private test run at Silverstone on 22nd June, with Alex Albon at the wheel of an RB15. This test run took place during the opening days of @FormulaStudent – disturbing the scrutineers at Copse Corner. There was confusion about why Red Bull would be running such fast laps with Alex Albon on a circuit the championship had just been to. But it is now very clear why it was done.

They were re-creating the line taken by Lewis Hamilton on Lap 1 of the British Grand Prix. What they found doing that was compelling enough for the team to lodge a petition for a right of review of Hamilton’s penalty. To replicate the lines Hamilton took (and one must assume Verstappen & Leclerc – though this is not stated) GPS data was used and Albon had to drive the RB15 in the same way. The results of this test were then presented to the FIA as new evidence.

The test data was described by the FIA as: “Slides created by the Competitor, for the Petition, which showed “a re-enactment of Hamilton’s Lap 1 line at Silverstone on 22 July 2021..” based on a lap allegedly driven by another driver (Alexander Albon).”But despite going to this impressive effort the Hungarian GP Stewards did not accept this as “a significant and relevant new element, discovered which was unavailable to the parties seeking the review at the time of the decision concerned”.

Instead, this along with GPS data and some simulations was rejected as evidence as it was not “discovered” but created for submissions to support the case. And were based on evidence that was available at the time of the decision (namely the GPS data).

So Red Bull Appeal for a review was rejected. This is an important distinction. It means that the Stewards did not review the incident at all, they looked at the evidence and its origin – and deemed that it did not meet the requirements for the petition to be accepted.

Test with the RB15 with Albon was not covered by the cost cap – here is why. RedBull appeal run used the RB15 – the regulations define this as “Testing a Previous Car” or TPC. The cost cap has a specific provision for this under “Heritage Assets”

Heritage Asset Activities = “Testing and maintenance of Previous Cars and Historic Cars” and is specifically excluded from the cost cap. So by using the RB15 RedBull appeal run will not have incurred any hits on the cost cap, which is really what the $1.8m issue is all about. Pretty astute thinking I’d say from Red Bull on this.

So that is that Hamilton’s penalty stands. No further discussion on the matter. At least not where the Stewards/FIA are concerned anyway about the Redbull Appeal. Meanwhile, Mercedes put out a statement that sends the Max Verstappen camp into boils.

Incontrovertible evidence you discover and reveal. Then there’s a case that you build based on information that, used in a certain way, creates a narrative. You might call it subjective evidence. RBR felt strongly enough to go down that route. That it was rejected as being newly discovered evidence comes as no surprise. The FIA Stewards take their jobs seriously and have a lot of data, audio & video upon which to rely when facing tricky judgments. Win, lose or draw, the judgment of a sporting referee is usually best accepted.

In this case, the way the World Championship pivoted as Max’s car speared into a wall is significant. The pendulum swung back towards Lewis. RedBull will now respond in the only way that’s under their control on the track. F1’s heavyweight contest restarts tomorrow at the Hungarian GP.