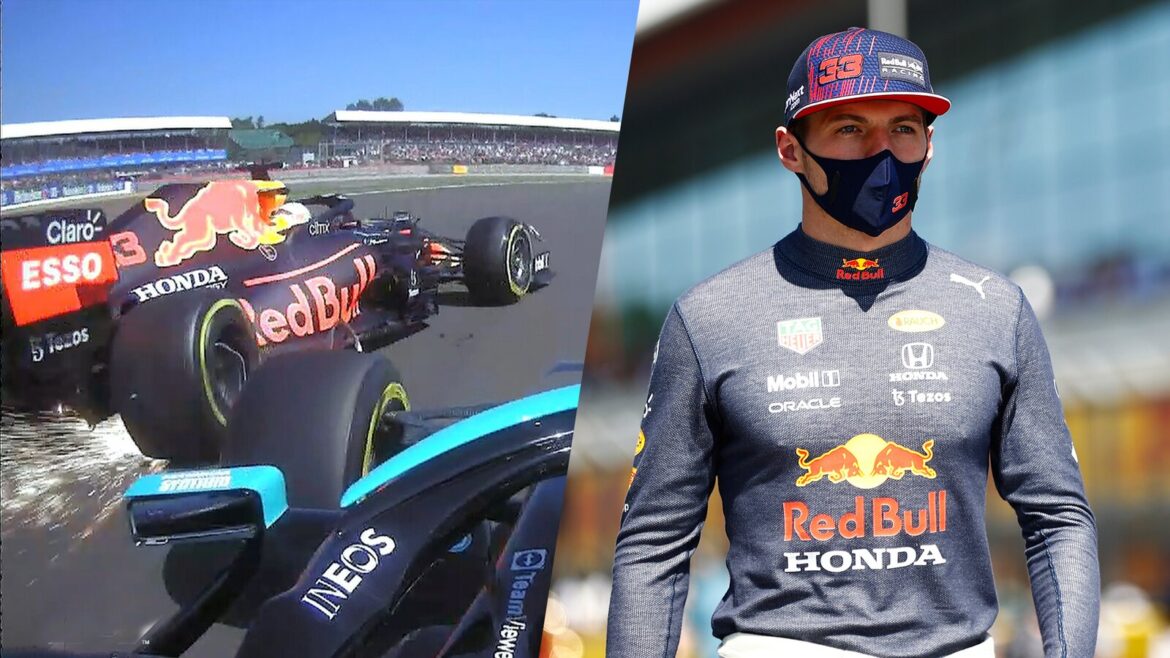 In the Aftermath of the British Gp, We look into the most defining moment of the Formula One World Championship, the collision between Max Verstappen and Hamilton. In this section, we do our best to dissect the incident and hope to give a fair explanation of it.

Hamilton was hurting since he was has lost his place in pole after Max Verstappen had an awesome start to the F1 Sprint, on Saturday. During his way to the grid, Max was asked to do a particular amount of warmup, and everything was calculated to the point that his tires were at the optimal temperature and not on fire like in the British Gp Sprint.

The start was good for Max he was slightly ahead in Turn 1 and was leading. Hamilton was right on the back of him. He knows very well that the Mercedes car is not good at following, and by Lap 1 if Verstappen is ahead he has no chance of winning the British Gp.

It was going to happen at some point during the Championship Battle, eventually going into Copes Hamiton tagged Verstappen and sending him into the wall, causing a 51G crash. Max was huffing and Puffing and the first 10 seconds of the radio message was silent sending shivers down the body. Eventually, he walked out of the crash but was visibly shaking.

The next frame reveals a lot, as Max was turning in for the corner and so it Lewis, Max is about a quarter of the car length ahead of Lewis, with full steering locks on Braking

Both of them are in full steering lock. From here on they can take three lines. The Wide line, Tight line, and Racing line. Lewis is on a tight line, Max is on the racing line. As per the rules, the car in the racing line is entitled to the corner, but Lewis was alongside Hamilton in the braking zone, which entails him the corner too. Neither of them lifted and Max Verstappen is the loser in the battle.

The contact happened to send Max into the wall at 51G, Fortunately, he is ok but he was sent to the Medical center for a CT and was discharged in the evening after all the checks. He will feel the impact tomorrow after his crash at British Gp.

In the cost cap era of F1, having a crash is too much expense for the team. It will hamper development, get the team morals down and the expense of rebuilding a car is so huge it will have impacts down the line. The Car is pretty much a write-off. A 51G crash 10 years ago will be a fatality, I thank the FIA, Michael Massi, Ross Brawn, Charlie Whiting, and all other staff and stewards who make the sport safe.

The Stewards reviewed video and telemetry evidence,” the stewards said. “Cars 33 [Verstappen] and 44 [Hamilton] entered turn 9 with Car 33 in the lead and Car 44 slightly behind and on the inside. Car 44 was on a line that did not reach the apex of the corner, with room available to the inside. When Car 33 turned into the corner, Car 44 did not avoid contact and the left front of Car 44 contacted the right rear of Car 33. Car 44 is judged predominantly at fault.” – FIA on British Gp Incident

“For me, it’s very clear: Lewis has stuck a wheel up the inside of one of the fastest corners on this world championship. He’s driven this circuit for years; you know you don’t do that here. The result – thank God we haven’t had a driver that’s been seriously injured or worse today”

“That corner, he was never anywhere near alongside,” he told Masi. “Every driver who has driven this circuit knows that you don’t stick a wheel up in the inside at Copse. That is an enormous accident. It was 100% Max’s corner. So, you know, as far as I’m concerned, full blame lays on Hamilton who should never have been in that position. You could have had a massive accident. Thank God he’s walked away unscathed. So, I hope you’re going to deal with it appropriately.”

“It’s a high-speed corner. These things are nasty to look at, but there is a clear regulation and that is something that is black and white and on paper and as a racing driver, you may have a different perspective from the car, but you need to exactly understand that if the front axle is over the middle of the car on the outside, it’s your corner.

“Now you can say, is that a corner that is equivalent to any other? Maybe not. But again, an accident involves two drivers. At the end they were racing each other hard,” Wolff concluded. “During the race, we saw overtaking there, Charles and Lewis was another example, and I think you just need to give each other room. That would have been my opinion”

Firstly, I’m glad Max is OK!!! That was an almighty shunt. Never EVER cheer for a serious accident, it’s disgraceful.

• In my view, Lewis was far enough alongside Max to earn space on the inside. It’s a “divebomb” when no part of your car is alongside before the braking zone, Lewis was nearly completely beside Max before trying to back out of it. Max has been just as aggressive with Lewis many times this year, the pair did not crash only because Lewis gave Max room.

• Max was aware Lewis was attacking him (hence going defensive multiple times earlier). To assume he would have uncontested access to the apex is… “optimistic,” in my view. • That said, Lewis could have backed out earlier, so I understand the penalty and won’t contest it.

A point of concern from Lewis to Max would have gone a huge way but that was missing all that was coming was slander from each camp.

The only thing I have an issue with is the determination of a racing incident which is a 50/50 split at fault. One driver shouldn’t gain an advantage over the other. If equal punishment is applied then these types of incidents should never occur. The rules currently cater and potentially encourage tactical collisions.