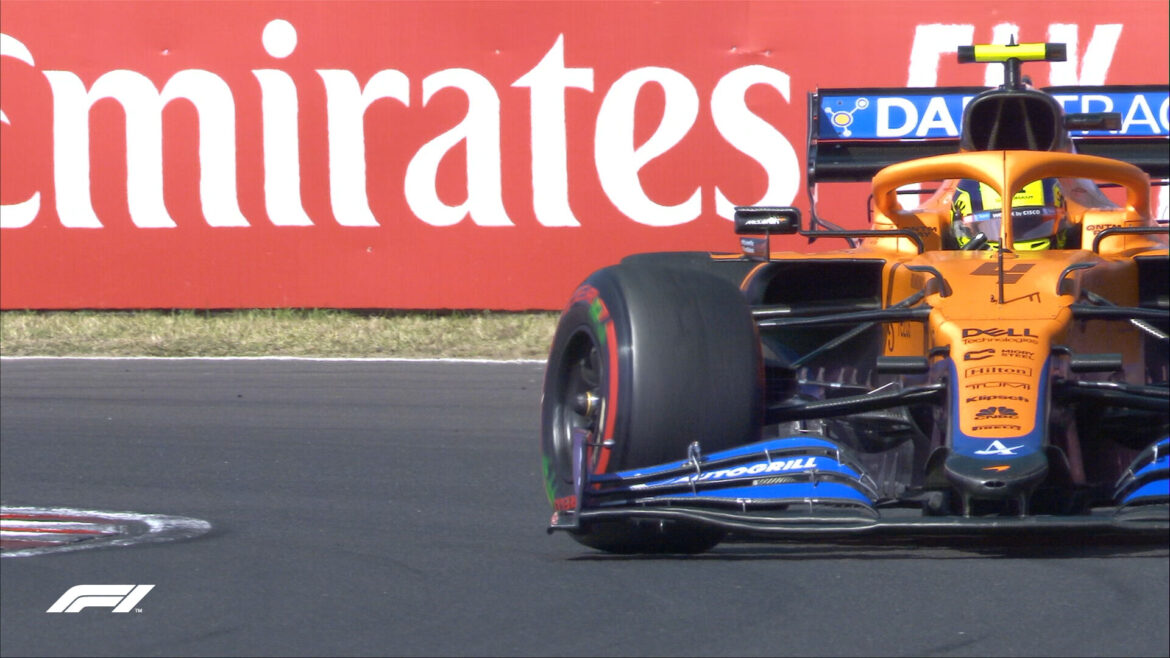 After a controversial British Gp, Hungarian Gp is upon us this weekend. The Fiery exchange of words aside, everyone wants to know what will happen at Turn 1 on Sunday in Hungarian Gp. But first practice on Friday and Saturday.

Nothings resets the mind like putting on the Helmet and going to race. Verstappen would want that after a massive shunt. The engine is salvaged from the crash and rebuilt in Honda Factory from Japan. The line and flow through the circuit are critical for a good lap in the Hungarian Gp.

Robert Kubica sat in for Kimi in Alfa in FP1. The Hardt tire run saw Verstappen top the timesheets at the initial stages. But times, at this stage, are unrepresentative. Ferrari is looking good on tires more so than their rivals in Mclaren. Sainz gets within half a second of Bottas as he deposes Gasly in P3. Ferrari is expecting to go quite well here, and considering this track is often described as being similar to Monaco, where Leclerc of course famously got pole.

The red flags are out and it is for Tsunoda, who has spun down at that tricky Turn 4. His car winds up hitting the barriers rearward. It’s becoming a Yuki Spinoda meme train again. Hope the car is fixed with less work but seems unlikely. Norris heads back out on track sporting a fair amount of green flow vis paint across his front wing as he gathers data. He is in eighth as it stands, and has already run the soft compound tire.

It is the top spot for Verstappen, by 0.061s from Bottas, not a hugely convincing lap there to really show his rivals a clean pair of heels, but a solid start. The game is on!

With five minutes to go, it is Verstappen from Bottas, Hamilton, Sainz, and Gasly. The Williams boys have elected not to run the soft tire in this session, While Perez is still in P8 after his soft tire run. Hamilton has made his soft tires last 11 laps and counting, while Gasly’s are 15 laps old. they are holding up okay in these extreme temperatures then, which is useful race data for anyone who will have to start on that compound.

That’s the flag then, as the opening session of the Hungarian Gp weekend draws to a close. Verstappen finishes in P1 with a 1m 17.555s, 0.061s ahead of Bottas. Hamilton is a further tenth back down the road in what is a somewhat familiar top three in Hungarian Gp FP1.

So there is very little to choose between the top two teams on the soft compound tire then, although fuel loads and engine modes were an unknown on those runs. All of which sets the weekend up rather nicely. But who else can get involved upfront? Perez was down in eighth, although he does tend to start slowly and pick up the pace as the weekend progresses. Let’s move into FP2 in Hungarian Gp.

In fact, plenty of cars head out to experience this 62-degree track for themselves. It is mostly the medium compound on display at the moment, although Norris and Sainz are on the hard tire. Tsunoda is yet to come out though.

Tsunoda’s car is still being worked on, so that earlier crash is proving doubly costly – the youngster losing time across both sessions here. The lion’s share of the work falls onto Gasly’s shoulders then, with any data he gathers taking on extra significance. Ten minutes are gone and Bottas sits in the top spot with a 1m 18.376s, two tenths ahead of Verstappen with Hamilton a further tenth back. Perez has managed to make up some ground since earlier and is in fourth.

Hamilton is now on top with a 1m 18.140s, over half a second slower than those times from FP1 that were set on the soft compound tire. The tire delta between compounds is normally around four to five-tenths, but the fuel loads and track temperatures will also be influencing the lap times here.

Here come that soft tire runs then, with Vettel, Latifi, and Russell all swapping to the red-marked rubber at a reasonably early stage doing Qualifying runs at the Hungarian Gp. Bottas reclaims the top spot from his teammate with a 1m 17.012s, half a second quicker than the times from FP1. Hamilton is fractions behind – 0.027s to be precise, while Verstappen is on his out-lap on the C4 rubber.

Verstappen’s lap is not quick he’s already half a second down as he goes through the middle sector. A stronger final sector claws back some of the deficit, but he still winds up third, three tenths back on Bottas in P1.

Most of the cars are sticking with their soft tires now as they seek data on how long this compound will last on longer runs. Even Vettel has come back out on the red-marked boots after doing just the one timed lap on them earlier – presumably with more fuel on board to simulate race conditions.

Raikkonen finally returns to the track after a lengthy stay in the garage, the Finn finally swapping to the soft tires, the last driver to do so bar the stricken Tsunoda. Sainz is topping the lap counter our there with 29 in the bag as Ferrari concentrates on long-run pace in this session. The Spaniard is in 12th, nearly a tenth back on his teammate who is just ahead. And with two minutes to go, Tsunoda finally makes it out onto the track.

The rumors yesterday in the paddock were that it is a very close call between one and two stops for the race if it stays dry, and you’d imagine anyone in the top 10 who starts on soft’s will be forced into the latter. P11 could become a very valuable grid slot to grab in qualifying tomorrow in Hungarian Gp.