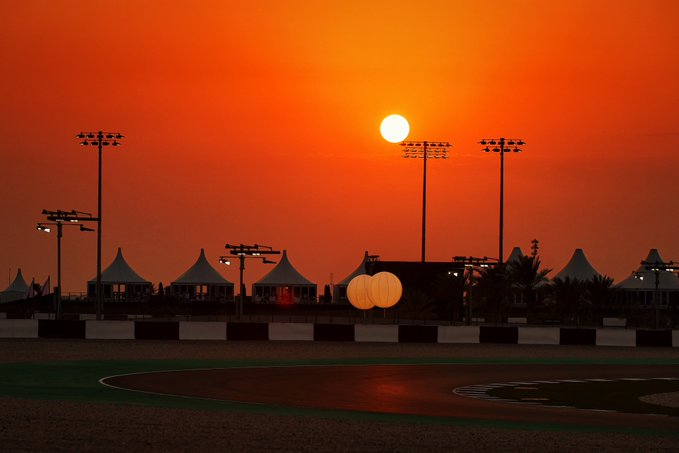 With the verdict of the stewards yet to come, all eyes are on F1 Twitter before the start of the Qatar GP, just who will go well here in Qatar? The jury is very much out, with some believing the long straight here favour Mercedes, who have been mighty on straight-line speed all season. But Red Bull have been pretty good themselves through the medium to high-speed corners, so it is up for grabs who might have the advantage here.

There will be heavy sandbagging from both the teams until Q3. Track limits will be monitored at FIVE corners – Turns 4, 12, 13, 14 and 16. Going off at Turn 16 will invalidate the lap a driver is on, AND their next lap. It’s just like the F1 game.

The weather here is in a word – scorching. The track is at 43 Degrees Celsius as it stands, with a 29 Degrees air temperature. This is the hottest part of the day though, with FP2 set to cool off considerably. Kimi is the first out there.

Dust and sand will be factors today, with plenty of laps needed to clear up the track. That being said, this track is situated in the middle of a desert and the wind is picking up out there so may well whip more sand onto the track at intervals. The drivers need their wits about them today.

Plenty of laps have gone in already, with the drivers keen to get a feeling for this new track. So far it hasn’t caught anyone out, and given its history with MotoGP, naturally, the run-off areas are quite large so that should make things slightly easier for the drivers as well.

This is the juncture where the teams often start to assess the data, before switching up the tyres and completing the second halves of their programmes which more often than not, involves lower fuel runs. Latifi and Schumacher have both swapped onto the red-marked tyres now, as they set off for some flying laps here.

The track should have rubbered in, but of course, the conditions right now aren’t fully representative of qualifying so those flying laps, later on, may prove more crucial today. More and more cars are coming out on the softs at the moment, careful not to use up too many sets from their previous allocations. By the looks of things, the track is proving every bit as fast and flowing as they predicted but as to what sort of times will be seen today.

So it is first blood to Red Bull in Qatar, with Verstappen comfortably ahead of the Mercedes pair. In the end, Gasly was an impressive P2, with Bottas third and Hamilton fourth on the timing sheets.

The other piece of news to bring you is that the stewards have declined the ‘Right of Review’ that Mercedes requested following an on-track incident between Hamilton and Verstappen in Brazil last Sunday. To find out more, give this a read.

Everyone bar Mazepin has headed out now, with Verstappen entering the fray on the same medium compound tyres as his Mercedes rivals. As it stands, Alonso is top at the moment with a 1m 24.723s, exactly one second slower than Verstappen’s time from FP1.

The soft tyres are starting to be bolted on now, with Ocon, Schumacher and Latifi the first to head out for some flying laps. Verstappen’s first flying effort is only good enough for P4 – 0.431s back on Bottas, but only 0.009s away from his championship rival. Nothing in it here tonight.

Everyone has set a flying lap on the soft tyres now, and it is Bottas from Gasly and Hamilton. Norris is up there in fifth, Stroll has impressed with sixth after sitting out much of the session earlier – and Tsunoda really has taken to the track as he sits seventh, ahead of Red Bull’s Perez in Qatar Gp

Verstappen is going for another flying lap here, but he is a couple of tenths off Bottas in the first sector. he is setting personal best sectors though, although he runs wide through the final corner. He improves to move ahead of Hamilton albeit still 0.350s behind Bottas in Qatar Gp

Into the final five minutes of Friday practice, and only Verstappen remains in the garage at the moment. The Red Bull boys have only completed 14 laps each, the least of anyone in the field.

As it stands Redbull is 0.4 sec slower in pace than Mercedes / Bottas Tops FP2