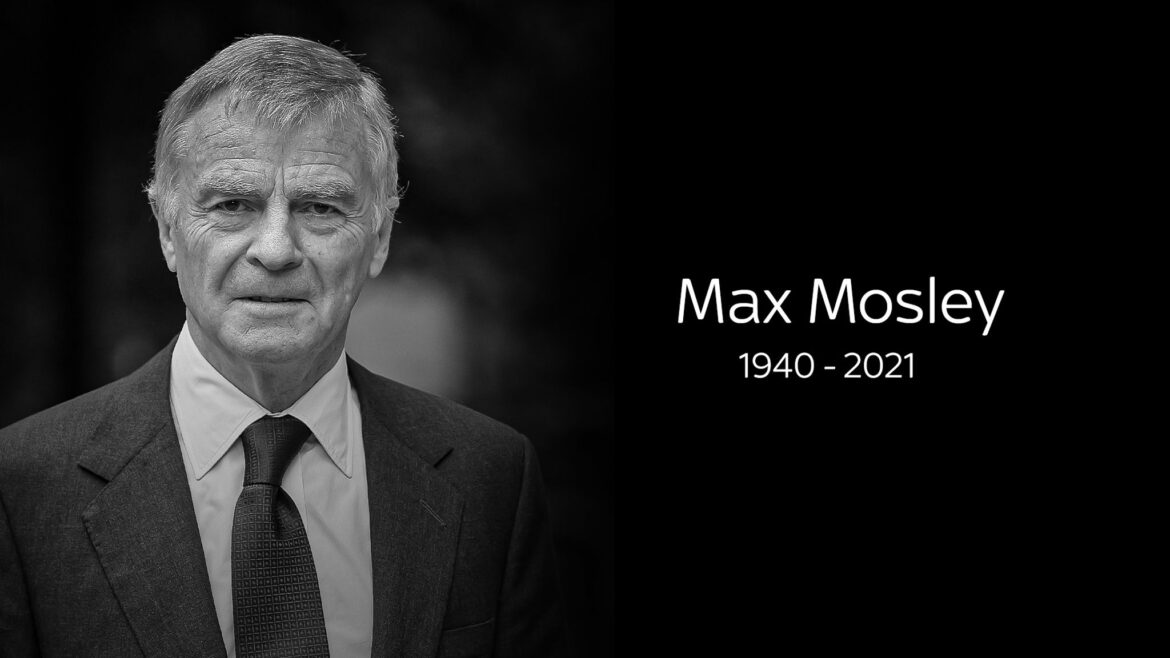 Max Mosley, the former FIA President and one of the architects of modern F1, has passed away at the age of 81. We look into his career and his contributions to F1.

Lawyer to Racer to Engineering

Born in 1940 his love of racing was imminent after his first race visit to Silverstone he was attracted to the sport. He began teaching law in the evenings after he became a barrister to earn enough money to start racing cars for himself. The sports did not come from his family ties. It was refreshing as it was with motor racing. Nobody gives a damn. In 1968 he formed the London Racing Team in Partnership with. Chris Lambert to compete in European F2.

Their cars to F2 were built by Frank Williams. In 1969 after two near-death accidents in the Lotus. Max Mosley quit racing and Joined March Engineering where he handled legal and commercial matters. His Barrister experience was put into good use when negotiating contracts with suppliers and vendors and negotiating team out of loopholes in FIA rules.

The initial years were successful. March Engineering was successful but the expenses of running a Formula one Engineering team caught up with them quickly. They borrowed money from friends and family to keep the outfit running and by building customer cars for Lower racing levels. They had different configurations and engines at different times. The BMW iteration of March Engineering won 5 out of the 11 races in European F2. By the End of 1977, Max Mosley had it enough in March and left to work with Formula One Constructors Association (FOCA)

FOCA was created by Bernie Ecclestone and others like Colin Chapman, Teddy Mayer, Ken Tyrrell, and Frank Williams in 1974 to represent the commercial interest of the teams in FIA meetings. Max Mosley officially became the legal advisor for FOCA. The yesteryears of the FOCA and FISA conflict came to an end when Concord Agreement was drafted between them and Max Mosley was instrumental in drafting the agreement which saved the sport from collapsing on its knees.

Mosley then becomes the FISA President in 1991 after his stint as the president of Manufactures associations. In 1993 Max Mosely becomes the FIA President which puts him in the limelight for all the good and bad reason.

In 1993, he instigated a ban on driver aids such as traction control and active suspension against the wishes of the teams. And his combative approach, in which he used a vast intellect to devise a clever strategy and often Machiavellian tactics, continued over his near two-decade stay in his role.

His biggest challenge came a year later when Ayrton Senna was killed in an accident at the 1994 San Marino Grand Prix that was broadcast live around the world – just 24 hours after Austrian driver Roland Ratzenberger died in a crash during qualifying for the same race. Max Mosley went to Roland Funeral as everyone was going to Aryton’s.

Recognizing the threat to the sport’s existence, Max Mosley announced the formation of the Advisory Expert Group chaired by Professor Sid Watkins, to research and improve safety in motor racing. The resulting changes included reducing the capacity and power of engines, the use of grooved tires to reduce cornering speeds, the introduction of the HANS device to protect drivers’ necks in accidents, circuit re-design, and greatly increased requirements for crash testing of chassis.

In this, he was backed by Mr. Ecclestone, and supported by the FIA medical delegate Professor Sid Watkins and the FIA F1 director Charlie Whiting. Together they changed the face of the sport.

There was a need to publicize F1 and bring in more audiences through television. With his long association with Mosley, Bernie drafted a deal that gave coverage rights for 100 years from the initial 15. This meant Mosley have to remove himself from his negotiation but many say it was already a done deal. The Deal returned 300 Million USD which lead to creating FIA Foundation which will have the resources to undertake important work on improving safety in motorsport and road safety.

This lead to the introduction of the Euro NCAP crash testing program. This required manufacturers to meet minimum safety standards in their cars for the first time and has played a significant role in reducing the number of deaths in road accidents.

This deal with Mr.Ecclestone and his antagonistic style of running the sport continued through the 2000s and the beginning of the end of his time at the FIA came with the News Of The World’s story. He survived the initial outcry but when in 2009 he tried to introduce a budget cap into F1, the big teams had had enough.

The latest of many political fights began, and this time Max Mosley lost. The major teams and car manufacturers threatened to set up a rival championship and to bring them back into the fold Max Mosley had to agree not to seek a further term as president when his latest one expired in October 2009.

Ex-Formula 1 boss Bernie Ecclestone said it was “like losing a brother”.He did, a lot of good things not just for motorsport, also the industry. He was very good in making sure people built cars that are safe.”

Jean Todt, his successor and current President of the FIA said he is “Deeply saddened by the passing of Max Mosley. He was a major figure in F1 and motorsport. As FIA President for 16 years, he strongly contributed to reinforcing safety on track and the roads.” He added “The entire FIA community pays tribute to him. Our thoughts and prayers are with his family.”

Though his Tenure in Motorsport was littered with favors and negotiations, Once cannot look past the fact that he was one of the main architects of the Safety of the Sport.