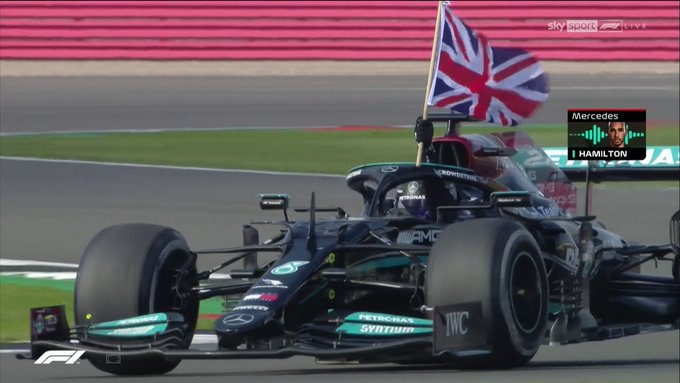 British Gp, the 10th round of the Formula One Championship saw Max Verstappen Crashing out in Lap 1 causing a red flag, Hamiton Wins a Grand Prix that he did not deserve to win after putting someone in the wall. Leclerc finishes P2, Bottas in P3. In this section, we look into how the action unfolded in the British Gp.

The Start of the British Gp

It could not have gone worse for Max Verstappen and Red Bull as Lewis Hamilton clips Max Verstappen into the barriers at end of the old pit straight. Max is limping but he is ok. Lewis is under investigation. Red Flagged. Lewis is awarded a 10-second penalty (a drive-through would be appropriate – Unpopular opinion)

Charles Leclerc made an awesome getaway, but Hammer time is coming. Vettel Spun after dueling with Alonso. Ferrari is gaining good ground and places and good points. Ferrari is 1st and 6th, Maclaren is 3rd and 5th. Ricciardo’s car was smoking but it was ok after two laps. Sergio is up to 13th. He can finish top 6 at this place as we settle in for a tire management pace.

The first Surprise is that Sergio Perez came off the Hards so quickly and onto the mediums after a round of Pit stops he is in 10th at Lap 31. Sainz pits from P2. The hards get bolted on, but the left front is stuck! Absolute disaster for the Spaniard, he is stationary for over 12 seconds and that has cost him the Podium. Hamilton pits, after saying his front left is “dead.” In he comes, and he stays stationary in the box for the full ten seconds. The crew then jumps into life, changes his tires, and swaps him to a set of hards he is 4 sec.

Lando would have been in better shape if he had a better pitstop. Twenty laps to go and Leclerc leads from Bottas by 8.8s, with Hamilton in third but already with his teammate in his sights. Norris is clinging on to the back of Hamilton as he seeks to be there to pick up the pieces if anyone has a moment upfront. Meanwhile, Verstappen’s teammate Perez couldn’t make those mediums last the distance. He pulls back into the pits, bolts on some fresh mediums, and returns in P16 with a lot of work to do.

After waving through Hamilton for 2nd place Bottas is told that Hamilton will catch Leclerc before the end of the race – and is instructed to follow as best he can. He has pulled out a decent margin to Norris behind, so can afford to nurse his tires somewhat – but again, will want to be close enough to capitalize if anything happens out front. Meanwhile, in front, It is “mode-race” for Leclerc, who loses another seven-tenths to Hamilton last time around. These personal best laps just aren’t enough for the Ferrari man to feel remotely comfortable out there.

Heading for a grandstand finish here. Behind the top three, Norris is holding on to fourth, Ricciardo has dropped way back but still has Sainz for company. Alonso is still heading that DRS train, with Stroll, Gasly, and Ocon behind. Perez is trying to recover after that second pit stop – he has climbed from 16th to P12.

“Lewis you are looking strong man,” Bono tells his charge, as Hamilton wipes another second off the gap. But the laps are ticking down, and Leclerc could well have been saving some rubber with which to defend here. The gap is 1.4 sec in Lap 48 in the British Gp

Down at Copse, Leclerc makes a mistake! Under pressure, he runs wide and allows Hamilton to sweep past. Replays show it was close to a repeat of the incident between Hamilton and Verstappen from the first lap – but this time Hamilton backed out and went again at the next corner taking the lead into British Gp

Apart from the absurd time penalty which didn’t make any difference other than a Max Verstappen in the wall but What a race. Drama from start to finish, penalties and collisions, and a huge swing in the championship battle. Hamilton wins in front of his adoring fans, ahead of the ever-popular Leclerc and his teammate. Norris comes home fourth for McLaren.