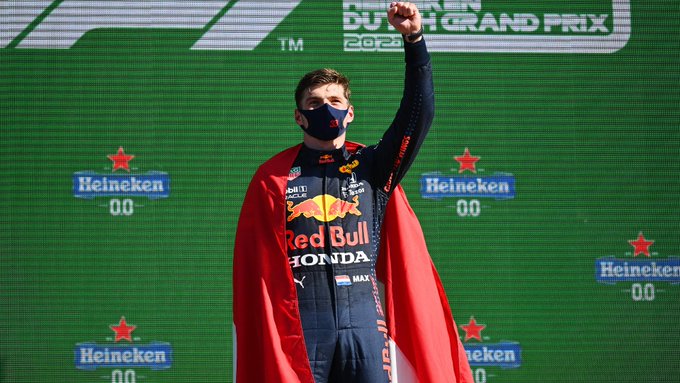 Dutch Gp in Zandvoort is one massive party at a beach club that happens to be 4.3km long, and it keeps being interrupted by some race cars now and then. With Max Verstappen starting on pole, after Dutch Gp Qualifying finishes in the top step and the crowd goes wild. In this section, we look into how it all went down.

Its Light Out in Dutch Gp

Verstappen leads away, slowly, slowly in these warm temperatures trying not to overheat the tyres or the brakes. The orange smoke is already drifting across the track as the party atmosphere in the stands rocks on as we set in for the five lights to go out in Dutch Gp.

Verstappen gets a great start and is away, leading into Turn 1. Hamilton tucks in behind, as Bottas has a small look around the outside. The front three hold station here, while Giovinazzi is already dropping back. The top six have all held positions around the first half of the first lap but Giovinazzi is down to p10 here. The gap out front is growing already though.

Verstappen already leads by over a second from Hamilton, who looks to be already settling in for a long race here, with the strategy set to be key and these soft tyres needing to hold on for around twenty laps. Verstappen has already pulled out a 2.3s lead over Hamilton now, the Dutchman taking advantage of running in free air upfront. needless the say, the crowd are loving this one.

Whatever issues Ricciardo was having on the first few laps seem to have blown over. He remains ninth and is within DRS range of Ocon ahead, who in turn is being held up by Alonso. A DRS train seems to be forming there, with Giovinazzi keeping in touch.

With Vettel in the pits too early we settle in for a strategy game in the Dutch Gp.

It is a set of mediums for the reigning world champion, who drops one place to P3 on track now. It wasn’t a decent stop either a tad slow, 3.6s and that could be the undercut gone here. Red Bull respond they just need to cover off Hamilton today. And a better stop too, 2.7s and Max come out comfortably ahead of Hamilton. He too is on Mediums.

Bottas now leads from Verstappen and Hamilton. Bottas has 9.7s over the Max and now needs to drag out this first stint if he is to make a one-stop work today. This is for the race win,” Mercedes tell Bottas, who now has to hold Verstappen at bay as long as possible, which will wear out the Dutchman’s tyres in the dirty air, and also back him into the chasing Hamilton.

Verstappen gets past Using DRS down the main straight, Max eventually breezes past and of course, Hamilton follows him straight through. That is Botta’s day done in terms of strategy and being useful in the fight for the win.

Out front, Verstappen is told “everything you’ve got for four or five laps,” with Red Bull perhaps hoping to pull the plug early here and get the jump on Mercedes. But it would leave Hamilton with fresher tyres for the closing laps.

No! Red herrings galore, as Hamilton pulls into the pits! Is it a better stop Yes! Just 2.5s for the reigning world champion, and he bolts on some used mediums. But he does come out into traffic. Red Bull respond, and it is a good stop for Verstappen, who bolts on used hard tyres for his final stint. He retains the lead, coming out into the gap that Mercedes were aiming for.

The gap out front is 3.2s with Verstappen tyre’s actually newer than Hamilton’s thanks to the Mercedes man getting a set of used mediums. But will the hard tyre be a good race tyre? Hamilton is starting to eat into Verstappen’s lead, with managing tyre wear and making sure you catch with enough rubber left to attack absolutely crucial here. Hamilton is questioning the strategy on the radio he thinks they’ve been bluffed into pitting too early today.

Hamilton Moaning throughout the race. He thinks he’ll not make it to the end on these medium tyres – they are the C2 rubber remember, with Pirelli bringing the hardest possible compounds to this race. Meanwhile, Perez pits and drops to P12 – but has fresh soft tyres with which to go and fight for points.

Hamilton is lapping slightly quicker than Verstappen at this stage, with the gap down to 2.9s as it stands. But the Max is looking increasingly comfortable here, able to manage his tyres in clean air. Hamilton takes another four-tenths out of Verstappen last time around but here it will be one thing catching, quite another passing. While Verstappen picked off Bottas relatively easily earlier, Bottas was on much, much older tyres at the time.

Perez has managed to get past Ricciardo incidentally, the Mexican back into the points with P10. He has eight seconds now to make up to chase down Norris ahead, who in turn is now just two seconds behind Ocon. As Hamilton worries about power cutouts, Verstappen starts to come up behind some more backmarkers and will need to negotiate them carefully here if he wants to maintain his lead over his rival.

Twelve laps to go, and the gap out front has increased as Verstappen lays down a quick lap to increase his lead to 2.5s. All of which is sending the crowd wild, they haven’t stopped partying here ever since this one began. Close-ups of Hamilton’s tyres do show a thin line of blisters on the front left and he is now over four seconds back on Verstappen.

Mercedes played the strategy to cover 2nd place for Hamilton by pitting Bottas and keeping him in the pit for a second or two longer and asked bottas not to go for the fastest lap. He went purple in sectors one and two before hearing the elusive “Valterri its James” call where he backed out of the fastest lap.

Perez has finally made it past Norris in the fight for P9, which is good news for Red Bull and bad news for McLaren, who look set to lose their advantage over Ferrari in the constructors’ today.” That was not very fair,” says the Mexican, as replays show Norris hung him out to dry on the outside, with the two making contact.

Verstappen has crossed the line and is off on the final lap after an imperious display by him on home turf. It’s been absolutely serene from him, and Red Bull.

Hamilton comes home second and does grab the bonus point for fastest lap which means Verstappen, having trailed by three points heading into this weekend, now leads by three points.

So Verstappen won from Hamilton and Bottas, with Gasly in fourth and Leclerc fifth. Alonso did pick off Sainz on the very last lap for sixth, with Perez in eighth having also passed Ocon late on. Norris rounded out the top 10.

Wolff was interesting there not a complete strategy disaster by Mercedes, but a series of marginal calls that all went against them. Working on the principle that Red Bull would bolt on the softs for their final stint not having any other medium compound sets in play makes that slightly early second stop make perfect sense.

The last word would normally go to Verstappen but instead, it is going to the fans. This wasn’t even a full house here and yet the atmosphere they created was second to none. The travelling army of orange-clad fans have made their presence felt at many races since Verstappen started his career, but this was something else entirely.