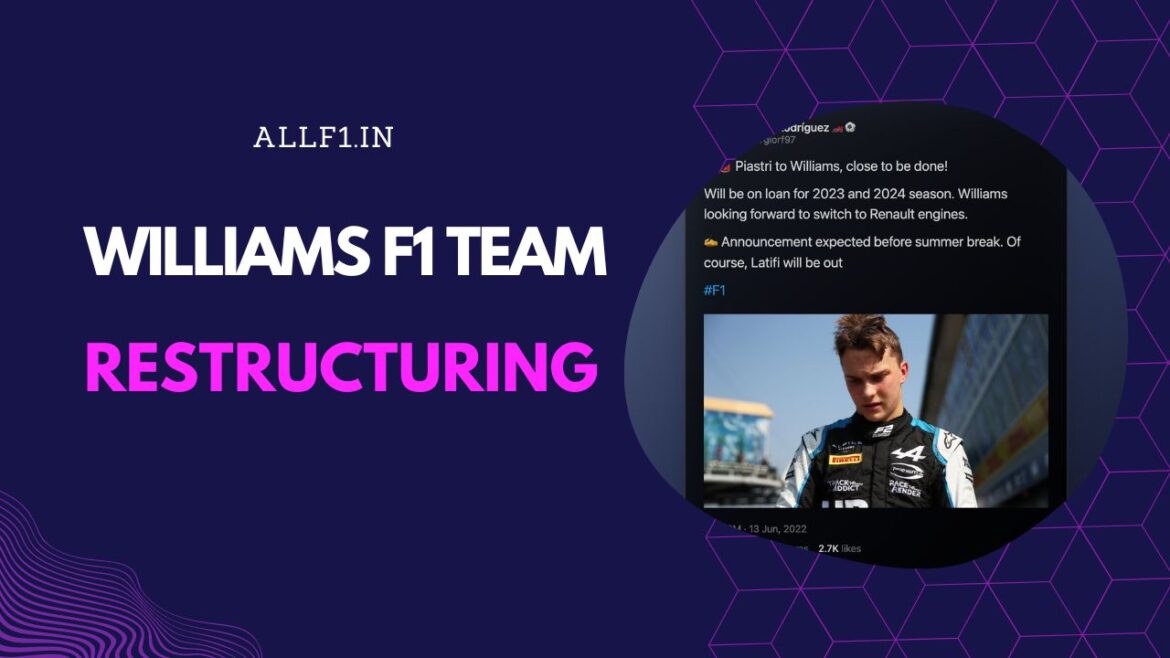 Williams F1 Team has a history which is astounding and remarkable. The brainchild of Sir Frank Williams followed by the legacy of Claire Williams this team’s success in F1 is a story to behold. But the downfall from the early 2000’s to till date has been very bad for the team. Dorilton Capital the investment company brought Williams F1 Team, the team’s future is assured as new owners take over from the Williams family, and closer technical ties to engine suppliers Mercedes are agreed upon for 2021 and beyond. But there are rumours up and down the paddock about its future.

In this section, we look into the Williams F1 Team restructuring plan and the driver’s plan for 2023.

Experience something of a resurgence, scoring a podium in the rain-curtailed Belgian Grand Prix 2021 courtesy of regular Q3 qualifying star George Russell. Improve to eighth overall in a campaign sadly marred by the death of founder Sir Frank Williams in November.

Having not managed a top ten finish since Robert Kubica in the 2019 German Grand Prix, Williams made a breakthrough in Hungary at long last with Nicholas Latifi and George Russell finishing in seventh and eighth respectively. There were other double points finishes in the following race as well.

He was able to secure his seat in Formula One thanks to his father. It isn’t a public secret that racing is a costly sport. To be able to race a full year in the Williams, Mr Latifi invested 36 million dollars in the financially plagued Williams team. And since drivers also have to earn a paycheck, Nicholas will get a $1 million paycheck at the end of the year, making him one of the three least earning drivers on the grid.

In May of 2020, during the height of the COVID-19 crisis, Williams got a loan of 56 million from Mr Latifi, with the historical cars, factories and grounds as security. So if Williams goes bankrupt, Mr Latifi will become the owner of the entire team. Mr Latifi also connected his own Sofina Foods brand as title sponsor to the equipment. As the importer of the Lavazza coffee brand in Canada, he also made sure that Lavazza and Williams signed a sponsor deal.

With Williams being sold to new owners Dorliton Capital, they are very vocal and said they don’t need any pay drivers in F1 for their team. but Latiti keeps his seat for 2022 on absolute merit.

But his performance was subpar in 2022, he was not able to match even Alex Albon his teammate and according to sources in Williams F1 Team, his time is up. This meant Oscar Pisatri might be the next available choice for the team and he is bringing the Renault Engine in his back as well.

As part of the deal, Williams will also purchase engines from Renault from 2023. With that, it says goodbye to Mercedes as an engine supplier. Team boss Toto Wolff recently let it be known that Mercedes would be happy to supply one team with fewer power sources in the future. For Renault, the Williams F1 Team becomes the first customer team in Formula 1 after McLaren decided to go with Mercedes in 2021.

With Oscar Pisatri deserving a seat more than any other on the grid. It is indeed very sad and on a personal level, I think if a guy achieved good results in F2, there should be a conglomerate that should sponsor these drivers who think will end up world champion once in his career a chance in F1. Let us see if the rumours of the Williams F1 Team replacing Latifi in Silverstone Gp 2022 hold any truth.

One thought on “Williams F1 Team and its Remarkable Restructuring”