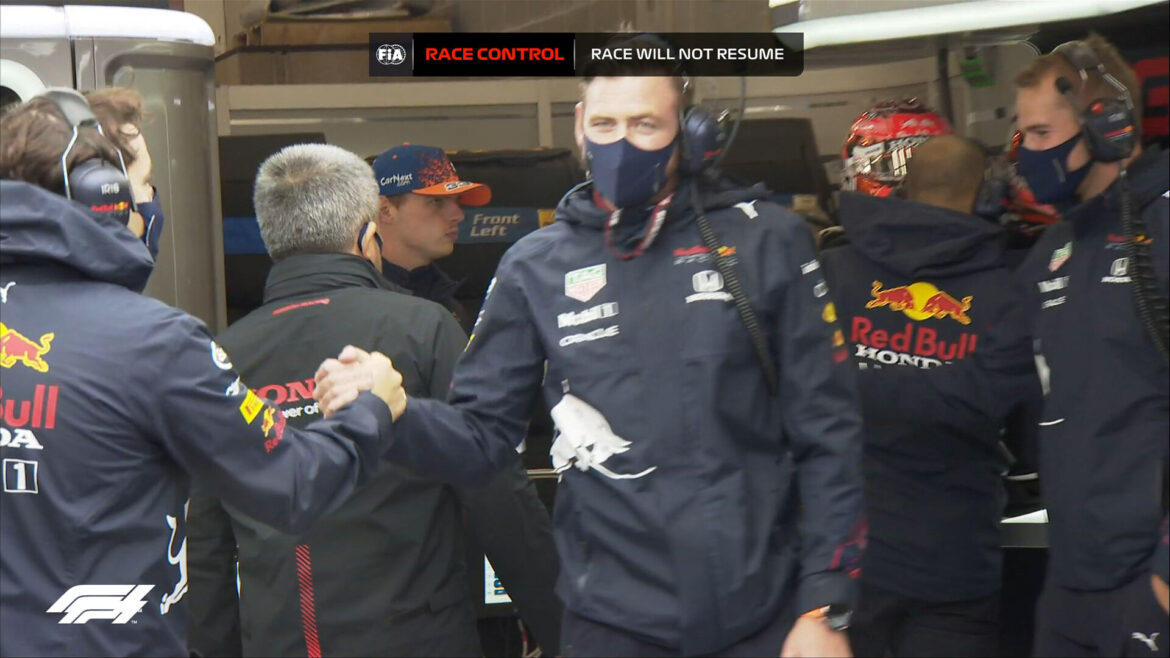 Round 12 of the Formula One World Championship is at Spa-Francorchamps for the Belgium Gp, where torrential rains saw the race delayed and classification made under the safety car. Verstappen wins Belgium Gp, with Russel in P2 and Hamilton in P3.

Hamilton Leads the Championship by 3 points !!

Before Lights out at Belgium Gp

After a crazy Belgium Gp Qualifying, we are in for a wet weather race all along. Max Verstappen starts on pole for Red Bull alongside George Russell Lando Norris has been cleared to race but has a five-place grid drop after needing a new gearbox. Valtteri Bottas and Lance Stroll also have grid drops, earned last time out in Hungary.

The drivers have been gingerly making their way around the track on full wets, with Hamilton already reporting “no grip”. And the cameras pick up Perez, who slides around Les Combes and is a passenger as he aquaplanes into the barriers. Red Bull’s Jonathan Wheatley tells Michael Masi that the right front suspension damage is too great to get the car back and fixed up.

With a minute to go until the Formation Lap was due to begin, Race Control has announced a delay. A weather system is moving through, with a new scheduled time of 15:25 for the Formation Lap.

I don’t know if you’ve heard but it’s my 200th Grand Prix, kind of a deal in our neck of the Woods.

The good news is the gazebos are indeed down now with three minutes until the new scheduled Formation Lap time. Meanwhile, Red Bull is working on Perez’s car but don’t expect to have any chance even with the delays to get it into this race.

Right, nearly through the Formation Lap, and conditions look pretty treacherous out there. Aquaplaning is being reported, and that is despite the drivers really tiptoeing around at the moment. The drivers are continuing behind the Safety Car with the idea that by running, they should start clearing the standing water and create a dry racing line.

It is really mixed in terms of feedback – “for me it’s fine to race” says Verstappen, but Giovinazzi isn’t so sure. So the red flags are out to make it clear to the drives that enough is enough for now. The Safety Car leads them back into the pit lane as per the usual red flag procedure.

Some drama down at Red Bull they are still trying to convince the FIA to possibly let Perez race if they can repair his car in time. Originally when he crashed, they had no chance of fixing it but with so many delays, there is a possibility but it all depends on whether stewards have accepted the technicality.

Mercedes have been chatting to FIA Race Director Michael Masi about timings with the race clock ticking down since the scheduled start time of 15:00. Masi confirms that the clock has started, which means this one has only 1hr 40 left to get going today. Masi also confirms that Perez can start albeit from the pit lane.

So good news for Red Bull, who can get Perez into the race if it starts. The team have been furiously working on his car ever since they realised there was a sniff of a chance of getting him into the classification today after he crashed on his out-lap to the grid the best part of two hours ago.

The race was scheduled to start at 15:00 local time of course, and it is well past that now. The official race clock has ticked down to 1hr 26 so if we do get going, it will more than likely be a timed race rather than reaching the maximum lap count. But still, there remain no further updates.

Right, The race clock has stopped at the one hour to go mark, which is essentially buying the Race Directors some time to get this one underway. As per the regulations: In accordance with the powers vested in them under the FIA International Sporting Code, the stewards have decided, in accordance with their authority under Article 11.9.3.o, to stop temporarily the 2021 Belgium Grand Prix at 17:00 hours. This decision is taken on the grounds of Force Majeure.

A WEATHER UPDATE WILL BE PROVIDED AT 18:05

There is some more on-track action, with a small truck attempting to clear some of the standing water using giant rollers. It might not be the action the fans came for, but it is boding well that it is considered dry enough to be worth trying to clear the racing line

F1 cars are back on track, as Verstappen follows the Safety Car out onto the circuit. The time has started, which means the race has now started. So the race is underway, with half points if the race is between two laps and 75% of the original race distance, which was 44 laps.

So officially it is now a 39 lap race but Michael Masi did confirm that it would be a timed race instead, with only 53 minutes left on the clock. Much will depend on whether or not the Safety Car can come in and safely leave the F1 cars to go race. Having now completed two full laps, points will be awarded today albeit only half the usual tally. All of which suits Verstappen who would be a guaranteed winner if the Safety Car can’t come in and release the drivers.

The conditions haven’t improved, the drivers were unable to see through the spray, they also couldn’t keep enough warmth in their tyres and brakes to be able to corner safely. Race Control has made the decision to red flag the race again, and the cars are back in the pit lane.

The weather has defeated the F1 circus, Race Control has officially said no more and that means Max Verstappen wins the Belgian Grand Prix from George Russell and Lewis Hamilton.