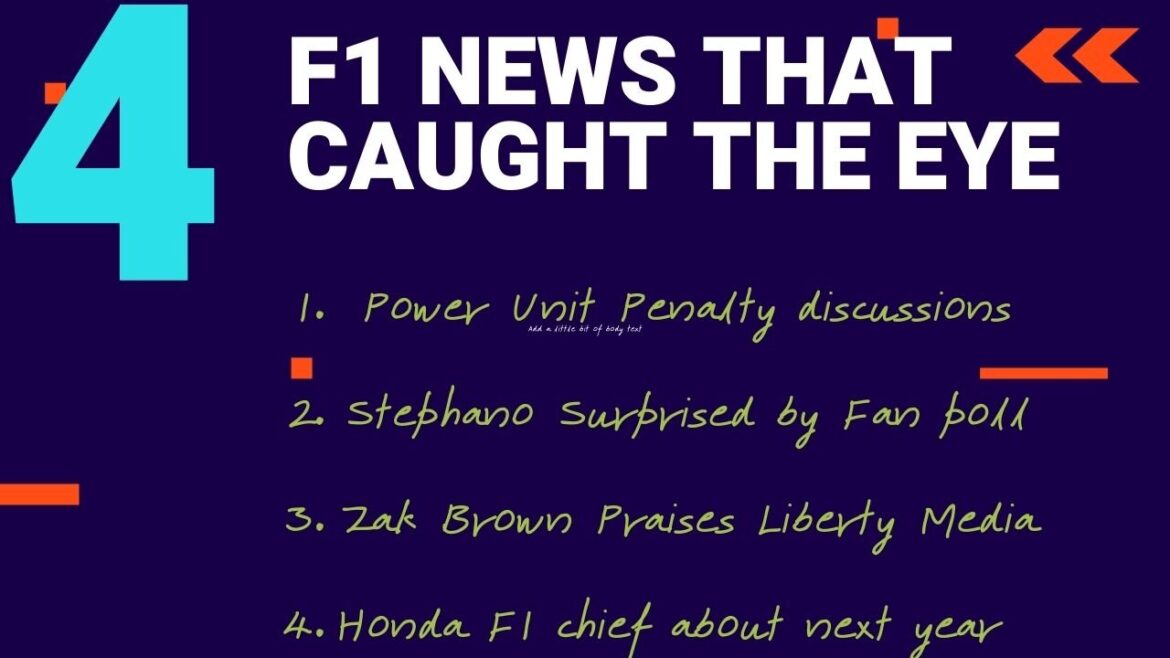 As we head into Mexico next week, in this edition of Weekly Roundup, we look into all the news that made headlines in this week ending – Oct 29th, 2021.

Penalties have become a talking point in this season, With Rebull in advantage after the USGP, and Bottas already in the 6th PU for the season, it’s inevitable at this point that this Power unit Penalty is the main talking point on this Weekly Roundup.

The teams are stuck though as they are struggling to find an alternative for the penalty points in the season. With next season also running 23 races, discussions about it right now are important. Though Redbull is not particular about this discussion because of their reliable Honda Engine, Mercede’s Toto Wolff is scratching his head with the reliability of the Engine block.

Though it is a one-sided argument in favour of Mercedes this season this could come in handy when Redbull is manufacturing engines next season, Toto in a recent interview with Autosport have said,

“I think the penalty system on power units is pretty robust,” he said when asked by Autosport if it was time to revisit the concept of grid penalties.

“Because what we need to avoid is that we are building power units in a way that they perform at peak performance for only a few races.

“And if you change regulations, and you say okay, there is no grid penalty for the driver, but just constructor points, it will still mean that teams, if you’re in a fight for a driver championship, will just throw engines at that car.

“I think if we come up with good solutions definitely it is worth looking at. It’s confusing for the new fans why, out of the driver’s responsibility, an engine penalty puts him at the back of the grid, or 10 or five places away. And that’s clearly not great, but I haven’t got the solutions.”

Domenicali was Surprised by Fan Poll

In the next news of Weekly Roundup, it’s the Fan Poll that ended recently, Stephano Domenicali was surprised that Hamilton did not top the poll.

Max Verstappen was named popular driver, but Norris managed to finish second overall ahead of Hamilton. A recent statement has said

“Well, I have to say, yes, in a way surprised

“But on the other hand, if you think about the demographic of the people that are more involved in these kinds of [votes], I think that you understand why Lando has a great audience, in that respect.

“It’s more connected to the fact that he has an approach with them that is fresh, in a way that is closer to the people that are following that. That is my personal view.”

Liberty Media and F1 in America.

We have covered this in detail in our post F1 in America, but in this edition of Weekly Roundup, American Zak Brown was all praise for Liberty Media.

In an Interview with MotoLat, he said,

“I think Chase [Carey, former F1 group CEO] did a great job and did exactly what Liberty wanted, which was take the sport and get it set up for the future. He did that. I think he did that extremely well, he’s now handed it off to Stefano [Domenicali, current F1 CEO]. And now the sport got a tremendous amount of momentum.”

I think Miami will be another turbine charge for the sport. Mexico, Montreal, you got neighbouring events and a TV contract that I believe is up for renewal in the not too distant future and that anticipates the growth of Formula 1.”

Honda Boss regarding his Future

Though Honda’s official departure from Formula 1 is scheduled to happen at the end of 2021, it will be crazy to see unbranded units in Redbull and Alpha Tauri cars next year. But has also said that it’s focused on becoming champion this year.

In a recent interview, after USGP, where max put an awesome performance he said,

I personally think it is disappointing that we are withdrawing”

“At the same time, we at Honda Racing understand that Honda as an automaker must commit to becoming carbon neutral. That process must be accelerated, hence this decision.”

2022 is a transition period for Red Bull, with people from Honda sticking around to help. The easiest way to explain it is that everyone from the management, like myself and the marketing department, will be gone.

As we end this week’s Weekly Roundup, Please share and spread the World and do visit Allf1.in