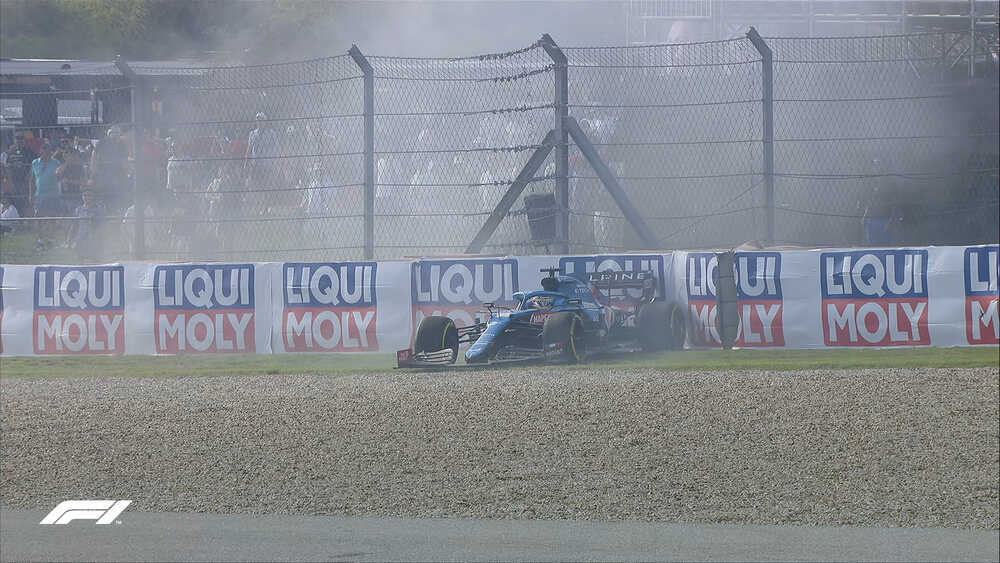 USGP, Round 17 of 22 comes to the turbo-charged Texas at The Circuit of Americas. The weather is warm and dry with plenty of sunshine. With only 6 races to go, it can be anyone’s driver’s championship now. Mercedes have a slightly upper hand in terms of speed in USGP.

Moving on to the race, Williams Geroge Russel and Sebastian Vettel are starting at the back due to engine penalties. It is two long years since the F1 drivers last chucked on their cowboy hats and winced at Daniel Ricciardo’s attempts at an American accent. But finally, the sport returns to Texas, and what a weekend this could be with Max leading by just six points in USGP.

The red flags are out, as Alonso’s car needs to be recovered. The Spaniard is climbing out and based on the team’s radio message, it looks like he has suffered technical issues. There is a queue at the end of the pit lane as the lights go green, with 49 minutes remaining in the session.

Hamilton jumps to the top of the leaderboard with a 1m 37.260s, 0.077s ahead of Verstappen and two tenths clear of his teammate. For reference, Bottas scored pole here in 2019 with a 1m 32.029s. Perez and Gasly ran an aero testing rig on the first few laps.

Halfway through the session, and Hamilton remains on top, leading by four-tenths from Perez and Norris. That is a decent time from the Mexican, considering he is running the hard compound tyre here. Hamilton does set his lap time, and it is nearly a second clear of Verstappen. But here comes Bottas and he goes even quicker, 1m 34.874s is two tenths clear of his teammate.

Into the final two minutes, and everyone bar Norris is out on track. All drama as the session draws to a close – replays show that Perez thought Schumacher was letting him through and tried to dive down the inside, only for the German to turn in and the two to make contact. Moments later, Raikkonen spins and ends the session with his Alfa parked sideways across the track.

Red Bull are scratching their heads here to find an answer. But it is practice, and there is nothing to say the Bulls weren’t sandbagging themselves. Verstappen will be going all out to retain his championship lead this weekend, which is a slender six points as it stands.

The two title protagonists haven’t waited for race day to get involved. They find themselves squabbling over the same bit of track, neither give any room and in the end, Hamilton nips down the inside to speed off, earning himself a certain gesture from the Max, who adds a concise “stupid idiot,” comment on the radio for good measure.

Halfway through the session and while Perez seems to be flying high, the same cannot be said for his teammate.” Why do we always ***** go in traffic?” asks Max, not impressed with his positioning for his flying run.

Back to the action, and the track is a busy old place at the moment with all twenty cars circulating. Traffic is proving to be something of an issue despite this circuit being nice and wide in places, with fresh air at a premium at the moment.

The cameras pick up Alonso, just visible through a cloud of dust, with his rear wing in the barriers down at Turn 19. Replays show he took slightly too much kerb, spinning around under acceleration and sliding through the gravel. The contact with the barriers was mercifully quite light.

Friday practice sessions always have to be taken with a pinch of salt, given that fuel loads and run programmes are something of a mystery. Nonetheless, having looked quick on the hard compound tyre in FP1, Perez certainly seems comfortable at this track and could be one to watch tomorrow.