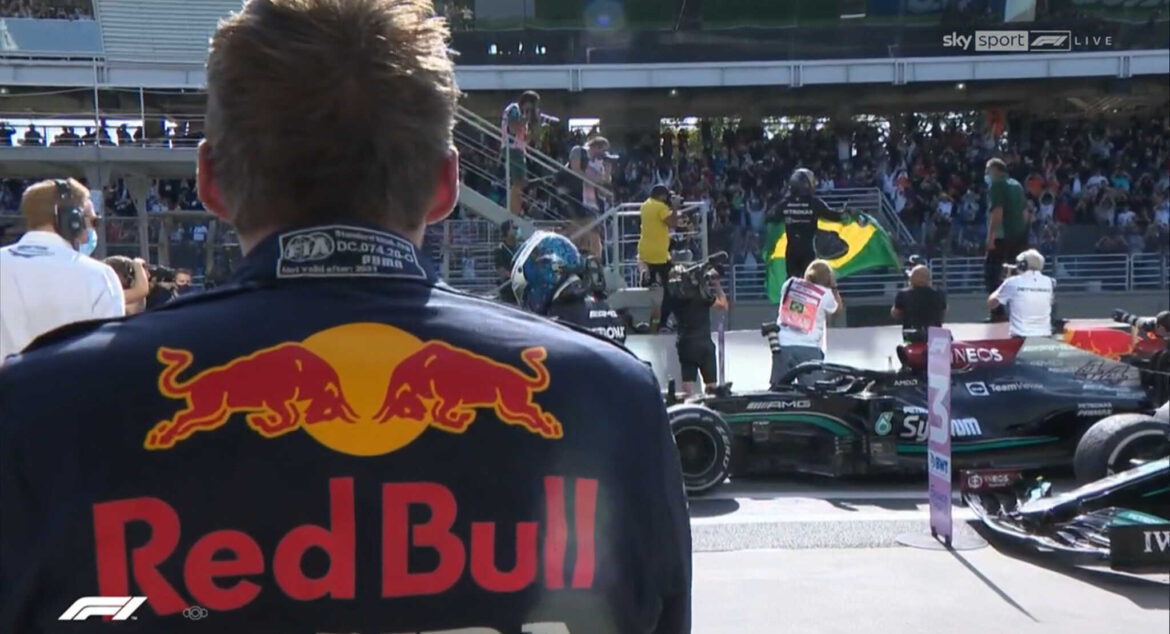 Brazil Gp, Round 19 of 22 in the Formula One World Championship saw Lewis driving brilliantly and winning and making a statement in the process. Toto has a fit of anger to vent and he does so. That race was spicy, to say the least. Amazing drive by Lewis this weekend. He started dead last yesterday for the Sprint. he rose to fifth. He was penalised for extra PU  parts and started today tenth. And yet, and yet. Hamilton is about to win the Brazil GP.

Max Verstappen Leads the Championship by 14 Points after coming P2 in Brazil Gp.

Verstappen knows all he needs to do is keep Lewis Hamilton behind today, and that drivers’ championship lead is going to start to feel pretty insurmountable for the Mercedes man. It stands at 21 points now – but a DNF would be an absolute hammer blow today to either man.

Saturday was equally topsy turvy. First came the news that his rear wing didn’t conform to technical regulations – and the meant he was disqualified from qualifying, and forced to start from the back for the Sprint. But then he battled back as he so often does, showing dogged determination to rise from P20 at the start to P5 at the flag.

Verstappen and all honda cars have replaced Break cylinders according to the technical delegate document. Is it for the gear sync issue Max reported at the start of F1 Sprint yesterday? Both Verstappen and Perez have to be on the podium to limit Hamilton from getting high up.

The final light goes out and Bottas hits the throttle and is streaking down to Turn 1. But Verstappen after another sluggish start gets motoring and is alongside as they hit Turn 1. Side by side into turn 2 and Verstappen gets him! The Dutchman is into the lead, behind Norris skates off with a rear puncture, and then Bottas runs wide and that lets Perez through!

Replays from the start showed a strong start for Norris as he darted around the outside of Sainz, ducking back in front of his old teammate a touch too early and as such, catching his rear tyre on the Ferrari front wing.

Hamilton has picked off Leclerc and has his teammate next up the road. Bottas won’t exactly put up much of a fight here. Behind Tsunoda has picked up damage after colliding with Stroll – and the carbon fibre flies up, littering the track. There is a need to be Safety Car and deployed.

Next time around, Hamilton goes for a carbon copy move and again passes Perez around the outside into Turn 1. But this time he maintains the position through the Senna esses. Phew. Mercedes wipe their sweaty brows – that’s one job done today.

Hamilton pits! It is an early stop here – an aggressive stop to pressure Red Bull. Hard tyres, 2.4s and that is a good stop. He returns out in sixth behind Ricciardo, as Sainz also pits, Redbull responds, Max gap decreases to 1.5 secs.

Hamilton showed the undercut is powerful – and Red Bull understandably then pit Perez. But Mercedes leave Bottas out, which won’t help the Finn. He leads from Verstappen and Hamilton. Perez emerges in fifth behind Ricciardo. VSC came on giving bottas a good stop overcutting Perez he is in P3.

Hamilton is 1.1s behind Verstappen. Mercedes have just asked Hamilton what tyre he’d prefer if he were to stop again. Is that a message for Red Bull’s hearing? Rebull Pits to stop the undercut, Mercedes responds. Pits both in Brazil Gp.

The Mercedes boys aren’t happy – as Bottas tells the team they have thrown away “an easy 1-2.”What is the plan here? Hamilton wanted mediums but tyre degradation is too high. But with tyres that are only a few laps fresher than Verstappen’s, can Hamilton catch and pass him on track.

Hamilton is close to fully alongside, if not an inch in front and Verstappen pushed him very, very wide there. Will the stewards look at that one? They did and no investigation was necessary, keeping the FIA Radio chatter filled with sarcasm.

The crowd were on their feet for that one, as Verstappen just didn’t have the straight-line pace there to keep his rival behind. Verstappen is shown a black and white flag for weaving, and the championship has roared back into life.

Hamilton has cleared off into the distance here and leads by nearly two seconds. While it has been all eyes on the front, the fight between Gasly, Ocon and Alonso has been epic as well. they’ve been three abreast at times, and now Galsy has picked off Ocon as he takes up the last of the late breakers mantle in Brazil Gp as we come into the closing stages of the Brazil Gp.

In anyone’s books, 20th to fifth in 24 laps and 10th to first in a 71-lap race is an incredible achievement. Straightline speed advantage or not, you have still got to use it and Lewis Hamilton certainly did that!