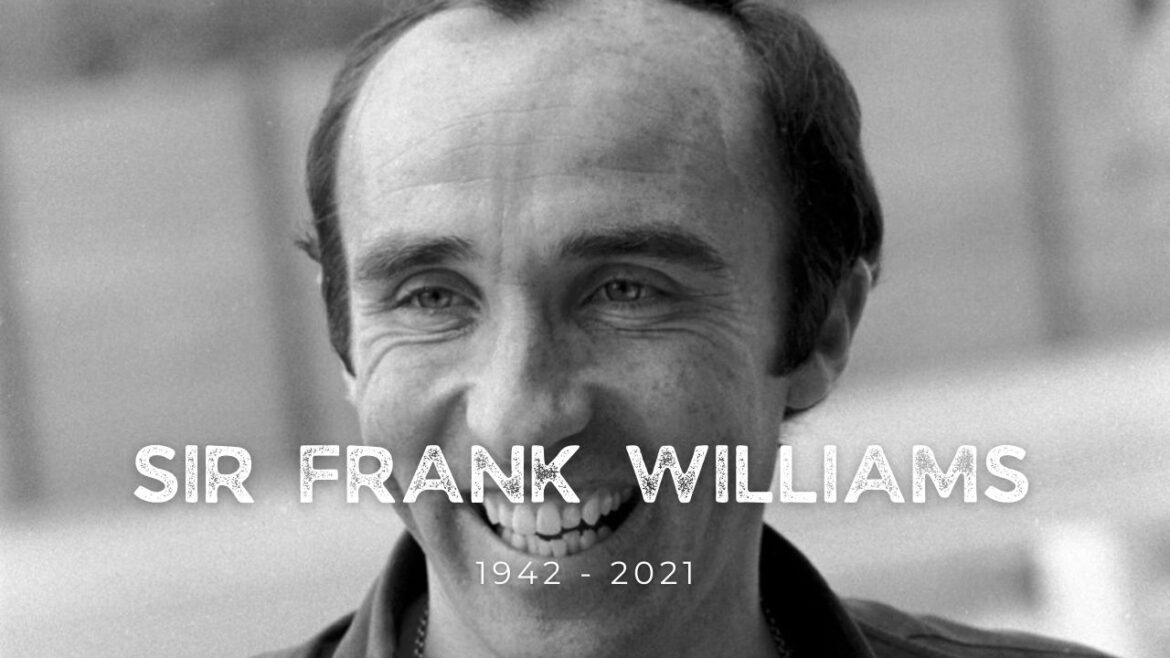 Sir Frank Williams aged 79, passed away peacefully on Sunday (28th November 2021) surrounded by his friends and family. An icon, an inspiration for hard work and an epitome of a don’t give up attitude, his life teaches all but one thing whatever happens do what makes you happy. In this section, we look into his amazing life as we bear light to the Extraordinary life of Sir Frank Willimas.

Frank Williams took his motor racing team from an empty carpet warehouse to the summit of Formula One, overseeing 114 victories, a combined 16 drivers’ and constructors’ world championships, while becoming the longest-serving team boss in the sport’s history.

He would remain in his role as Williams team principal for a further 34 years before F1’s greatest family team was sold to an American investment group in August.

He set up shop at an old carpet warehouse in Didcot, Oxfordshire and signed a promising young engineer named Patrick Head. The double act would go on to make grand Prix history. With Saudi Arabian funding and the hiring of Australian driver Alan Jones, Williams Grand Prix Engineering became a force.

The Accident that changed Everything

Frank Williams life is all the more extraordinary by the horrific car crash he suffered in France that left him with injuries so devastating doctors considered turning off his life-support machine. But his wife Virginia ordered that her husband be kept alive and his sheer determination and courage and character that personified his career enabled him to continue with the love of his life, albeit from the confines of a wheelchair.

Following a test at the Paul Ricard circuit in March, Williams set off on a 98-mile dash to Nice Airport in a rented Ford Sierra. Travelling through the windy roads at speed, Williams lost control and the car ended up on its roof following a 2.5-metre drop into a field.

Frank Williams’ passenger, the team’s marketing manager Peter Windsor, escaped with minor injuries. But Williams suffered a spinal fracture that would leave him in a wheelchair for the rest of his life.

“I was late for a plane which I didn’t need to be late for because I got the French time mixed up with the English time,” Williams later said. “The roads were very bumpy, the hire car was not the world’s best, and suddenly I was off the road upside down and with a broken neck.

“It was very unfair on my family, particularly my wife, because of how my circumstances changed. In hindsight, it was a careless and selfish thing to have done. Life went on, and I was able to continue, but it has been a handicap in the true sense of the word.”

Sir Frank Williams on the accident in 1986

In May 1994, following the death of Ayrton Senna in the Williams FW16 at Imola, Williams was charged with manslaughter in Italy, but was acquitted after several years. Since Senna’s death, every chassis since the Williams FW 17 has carried a tribute in the form of a small Senna logo on its front wing supports, or nearby.

Virginia wrote an autobiographical book that was published in 1991, A Different Kind of Life, in which she describes her experiences in the Formula One team’s formative years as well as her husband’s near-fatal accident. For his part, Frank Williams decided not to read her account during her lifetime, preferring to leave the past in the past. She was diagnosed with cancer in 2010, and died on 7 March 2013, at the age of 66.

The Man that everyone Adored

Frank Williams was knighted by Queen Elizabeth II in 1999 but his team was never able to replicate its heyday of the 1980s and 1990s. He stepped back in 2013, the year in which his wife died, allowing his daughter Claire to assume the day-to-day running of the team.

His values including integrity, teamwork and a fierce independence and determination, remain the core ethos of Williams F1 team and are his legacy, as is the Williams family name under which we proudly race. Our thoughts are with the Williams family at this difficult time.

Ups and downs.  Recovering from the downs.  Working towards the ups.  Construct.  Deconstruct.  Push.  Be self-critical. Never give up. The man in the wheelchair – Knighted for his services to his industry – thus prepares for yet another race in heaven.