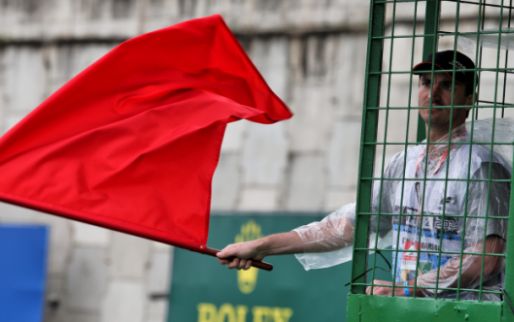 As Red Flags becomes more common, we look into the changes that just make sense. We look into the cases of Belgium Gp, Hungarian Gp, Monaco Gp and Baku Gp to explain the rule change that is required for F1 under Red Flag.

There is a huge discussion after the Belgium Gp last weekend on how the FIA and Michael Massi handled the situation. There were some instances where the decisions were spot on but not in other avenues. But the overall process was in short Messy and exposed a lot of shortcomings in the Rules and FIA being on the top of the rules.

Redbull’s contest to bring Perez back into the race is one fine example. When asked initially Michael Massi was definitive in his answer No. But when Johnathan Wheatley confronted him on the legality that outside help issue was relevant only after the start of the race, Massi retraced his assumption and allowed Perez to race.

This situation, where the Race director is not in Total Command of the Rules puts the FIA in a bad spotlight but that is a minor inconvenience. The big debacle came in the form of race laps.

When enquired on the race laps, there seems to be a lot, I mean a lot of confusion. The rule that every five-minute delay in the start of the race will count to a reduction of one lap according to Martin Brundle is for formation lap issues if a car is stuck in the grid.

The Red Flag races in particular have no scenario rules. The Provisions for rain delay is much limited in terms of other sport. NASCAR can prepone or postpone the race when needed. But in the case of Belgium Gp, I think there was a genuine attempt by the teams and FIA to run the race.

The teams and the FIA believed that there is a gap in the Rain in the Radar where the race can happen. But before it could go on it was too late and by the time they started again, the rain was much worse.

With Climate change breathing down the neck what can be done is to reschedule SPA into friendlier weather. Since the track was ok the visibility was the main issue. Since the air moves the same as water 2022 cars might be better in terms of the spray. The Communication and Radar Equipment needs to be upgraded or organize a driver event or some events in terms of fan engagement.

Rules ambiguity was one other issue but amendments need to be done immediately after a loophole is found. But rules ambiguity is also because there is no transparency in decision making. This lack of transparency might be the reason for ambiguity.

British Gp, saw Max Verstappen being shunted into the wall by Lewis Hamilton followed by the Red Flag. Lewis Hamilton was allowed to repair his car during the Red flag conditions. While the rival car is in the ditch and Lewis being “Predominantly at Fault” his repairs to the car is unacceptable.

Twice this year, during race suspensions at Imola and Silverstone, a number of substantial repairs were permitted to Hamilton’s car which enabled the seven-time champion to score a total of 44 points, split 19 and 25 respectively. Of course, Hamilton and Mercedes did not act improperly – the regulations permit repairs during a red flag. But this effective 44-point bonus for car number 44 could well prove decisive in the final stages.

Nothing other than a tyre change is to be allowed. George Russell thinks that shouldn’t be allowed as well.

Read here for the full story that happened in 2020.

During Monaco Gp, Leclerc put his Ferrari in the Wall bringing out the red flag and spoiling everyone final run. The same happened in Baku Gp as well when in Q3 Ricciardio and Yuki Tsunoda put it in the wall.

There is a need to penalize these attempts to be happening again and again. Cause a red flag in Qualifying get a grid penalty. Though the case of Michael Schumacher attempt has not happened ever since. But this rule is to be changed for good.

The other issue is the race start in the Baku Gp, When there is only 2 laps remaining the FIA decided for a standing start instead of a rolling start.

Even Red Bull, who had the most to gain from not restarting the race, saw the decision coming. The team’s sporting director Jonathan Wheatley was heard making the case to Masi during the race broadcast: “Consider a red flag and the opportunity to change tyres,” he said.

But the decision to red flag a race and then restart it so close to the end created a significant precedent for future occasions where the Safety Car is running with a handful of laps remaining. In such a situation, teams now have reason to expect race control will consider red-flagging the race in order to conclude it ‘under the green’ instead of finishing “Under the Yellow”.

As red flags have become more commonplace in Formula 1, this scope for inconsistency could easily be a flashpoint for controversy if it is not addressed.