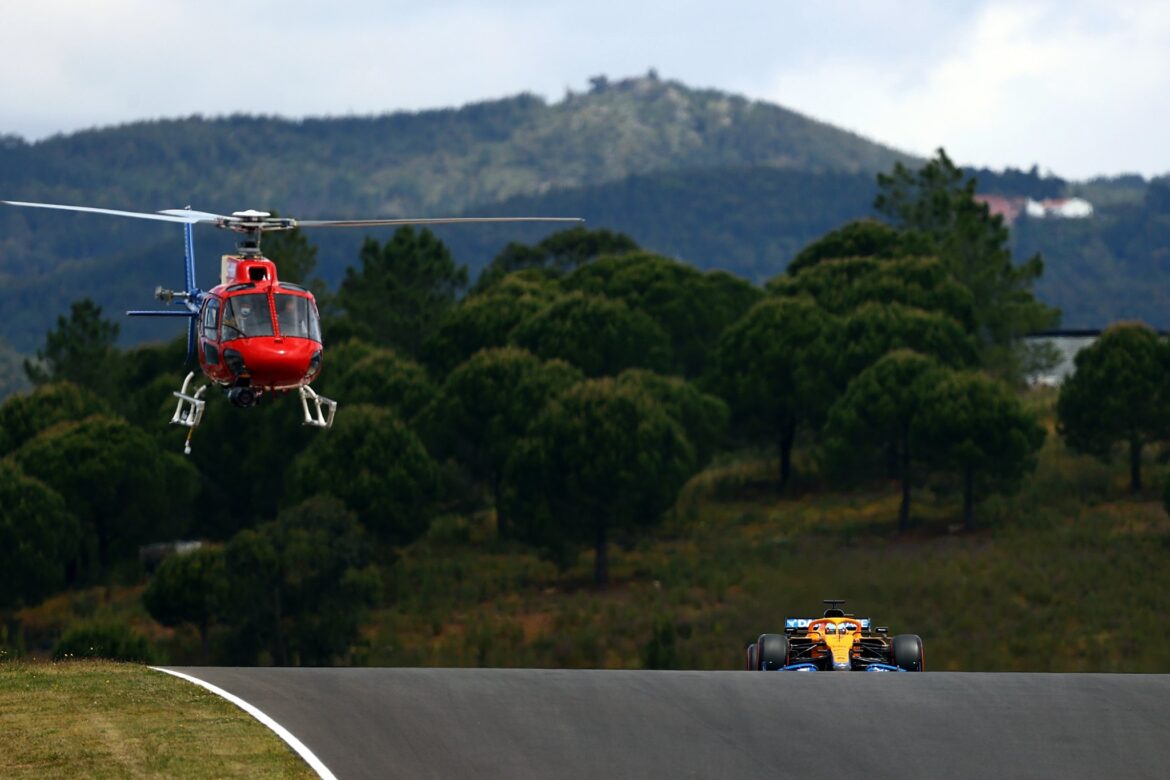 Portuguese Grand Prix, the 3rd outing of the Formula One World Championship is heading into Portimao for the 2nd time in 2 years. The Track layout and pre-race expectations are high. Read all about it here. On a weekend where Aryton Senna and Roland died, it’s quite an emotional weekend for many fans in F1. Aryton was a life coach and an inspiration for many Portimao was Senna’s home in Europe.

Learn more about the track here

The biggest incident that happened in the Practice session was a P Zero board falling off. Let get the essentials out of the way. The track as we all know was resurfaced last year and it was literally like driving on thin ice. After a lot of racing and moto GP race, the track has rubbered in. It was windy. 30 Kph wind in some parts of the track. The Grip is not phenomenal here but it is getting better.

Cars are getting in a good lap time during the double warmup outing. Nico was in the commentary for some time FP3. It’s all about Tire temperature and operating window for this track so qualifying would be tricky and expect some fighting for track position and Queues in Q3. Gasly, Alonso, Kimi, Mazepin (5 times) had lap time deleted for track limits. Alpine looks strong after the upgrades. Lance got the upgrades instead of Vettel for the Aston Martin. As the Portuguese Grand Prix practices some

Mercedes dominated the Qualifying with Bottas on the pole by 0.007 sec. Hamilton was not able to put down a perfect lap as the conditions and the wind made it tricky. The Redbull Duo of Max and Sergio were struggling to put down a decent lap. The car was all over the place but they managed the second-row lockout in 3rd and 4th. They now have to have a cool head and plan their tire strategy so they control the race. The Colder conditions of the track are much suited for Mercedes is the general consensus.

Sainz on 5th out qualifying Leclerc. Riccardo is pushed out of Q1 by Ocon who put his Alpine in 6th. Lando Norris is 7th followed by Charles and Sebastian Vettel after Fifteen Q2 knockouts, is in 10th, and is showing pace in that car finally. It’s the most comfortable Vettel has been in Aston Martin yet and hope it continues. Russell, as always so close yet so far for Q3. Gasly in his Alpha Tauri propped up in 9th while his teammate is in 14th.

The Qualifying highlights of Portuguese Grand Prix is here and Post Qualifying Reactions is below.

Portuguese Grand Prix saw an awesome start by Bottas. Kimi and Giovinazzi contact deployed a safety car at the end of Lap 1. Max Pummeled Hamilton on the restart to get 2nd place and the race is on. Max made a mistake in turn 14 and lost the place to Hamilton and Mercedes pair checked out. In Lap 16 the soft’s are getting warm and runners are in a bad place already but no one is coming yet.

Hamilton overtakes bottas on Lap 20. Controlling the pace of the Portuguese GP. Max stuck behind Bottas until the Hards heating issue throws his lead away Putting Max to the 2nd. With Perez in the Lead without a pit of course Redbull is back in the game for the Portuguese Grand Prix.

As we reach the final stages Mercedes is a tiny bit faster than max at this stage. Perez is going for the Softs in the end and going for the fastest lap for the championship point that would help in the latter part of the series. Mediums are not working in the second stint so it the Hard tires that are setting the mid-field battle on fire. Alpine and Ocon are flying the best outing for them so far. At 54 Laps out of 66 Hamilton has checked out.

As Bottas is fighting Max for the second position he radio “Losing Power” but it defaulted and power on as before this gave Verstappen breathing space. But he was unstoppable so all went for a pit stop instead for the fastest lap. . The rest of the race has some interesting overtakes in the midfield. Sergio was fourth. Lando P5 and Daniel P9. Leclerc in P6 and Sainz in P11 after a bad 2nd stint.

Portuguese Grand Prix has a sense of Normalcy that is restored. After the first two races, it was a rather boring one, to be Honest.

One thought on “Normalcy Returns to The Portuguese Grand Prix 2021. Weekend Review.”