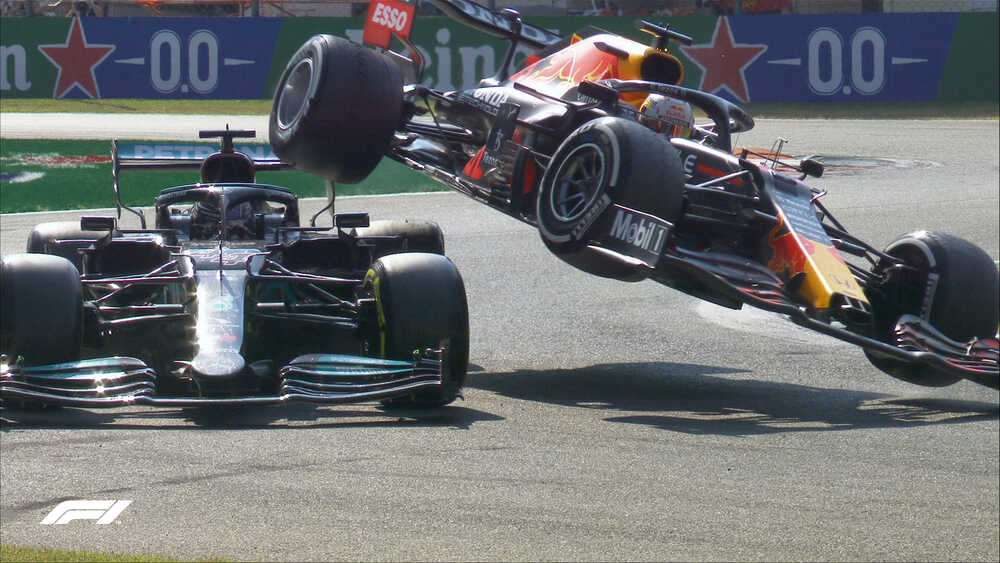 Italian Gp at Monza, the sun is still shining here, as it has been all weekend. All of which bodes well for the race itself and for the fans, who have been allowed here in limited numbers. The Tifosi have been in good voice all weekend and should be out in force today.

Lining up on pole though is none other than Max Verstappen. He finished second in the sprint yesterday but inherits P1 due to Valtteri Bottas’ grid penalties. Who leads by the end of Turn 1 is the million-dollar question.

Pierre Gasly has reported issues on the warm-up lap and is back in the pits now. Hope he gets out in time. As if the news couldn’t;t be bad Yuki’s car has been pushed off the grid and back into the pit lane here and with five minutes to go, can AlphaTauri diagnose and repair whatever the issue is in time.

Starting tyres are in and it is mostly mediums as it stands. Gasly has opted for the hard compound from the pit lane, and Bottas and Kubica have done likewise from towards the back of the field. But this is interesting Hamilton is alone in the top 10 as opting for that C2 hard compound.

Pierre Gasly is starting, Tsunoda is out !!!!

Light Out in Italian Gp

It is a great start for the Dutchman who is gone here, streaking away to Turn 1. But no, Ricciardo gets a better grip and pulls alongside into Turn 1 and gets past! Ricciardo leads the race, and Hamilton has picked off Norris. Hamilton has got past Norris and is pulling up alongside Verstappen here, but the reigning world champion has to back out of the move and in doing so, goes wide and loses the place to Norris.

The Virtual Safety Car has been called – Giovinazzi spun on the first lap and has left debris on the track, it looks like he had contact with one of the Ferrari drivers. The Italian has managed to get back to the pits for a new front wing. Meanwhile, Pierre Gasly is out due to a technical issue.

No sign of Verstappen managing to pick off Ricciardo last time around, but those two have pulled clear, with Norris now acting as a roadblock. For Hamilton’s strategy to work, he really needs to clear Norris here. Further back, Perez is up to seventh and trying to chase down the Ferrari pair ahead. Bottas has already made his way up to p13, but now has a bunch of midfield runners to try and negotiate.

Settling Down for Italian Gp

Hamilton is told that the medium tyres are starting to suffer some wear now, and this Mercedes strategy could be about to start paying dividends. Further back, Bottas has picked off Ocon down the main straight for P11. So Ricciardo leads from Verstappen by 0.9s, but behind Hamilton finally has a proper look into the first chicane. He starts to pull alongside and tries to out drag the Mclaren but has to cede when they reach the second chicane. This one isn’t going to be easy today.

So Bottas has picked off Alonso as he continues with his strong drive from the back, also shod with the hard compound tyres. next up is Stroll, then he’ll be chasing down the Sainz. Ocon has been given a five-second time penalty for that moment with Vettel incidentally, officially for causing a collision. He is P12 as it stands ahead of the first pit-stop period of the Italian Gp.

Ricciardo is having a good out lap, but what has happened here? It is a slow stop for Verstappen, a sticky tyre by the looks of things and he was stationary for 11.1s there! The absolute disaster he emerges in P10. All eyes are on Verstappen, which means no one notices that Hamilton has put his foot down through Curva Grande and managed to get past Norris for the lead of the race.

When shit hit the Fan

is a good stop and out he comes, but it is going to be close with Verstappen here. indeed they are side by side and they collide. Verstappen’s car is in the gravel and Hamilton has Verstappen’s Red Bull parked on his front nose. Can he get going No! Both are out of the race!

Replays of the Hamilton-Verstappen incident have come in, and it is a hard one to call. Hamilton comes out the pits in front and has the track position heading into the first part of the chicane. But Verstappen has a dart up the inside, Hamilton squeezes him, the Dutchman gets on the kerbs and that sends his car airborne, as his rear wheel comes up and over the rear wing of the Mercedes. A very near miss for Hamilton there.

“Maximum attack” Bottas is told as the Safety Car pulls in. Riccardo is gone here but Norris pulls alongside Leclerc into the chicane but can’t make the move stick. But he does make the move stick into Curva Grande. So Ricciardo leads from his teammate -and regardless of any team orders, no way will Norris not be going all out to win this one here. Leclerc is in third, with Perez for company.

LAP 43/53Bottas seems to have picked up the pace, his tyres starting to come back into their window. Ahead Perez locks up which enables the Finn to further close the gap, but he can’t quite make a move. He does have a look through Curva Grande and to the second chicane, gets past but runs deep and then enables Perez to get the place back. Perez has a 5-sec penalty for overtaking Leclerc.

The laps are ticking down now, and still, Perez and Bottas can’t find a way past. Is McLaren on for a famous 1 – 2 here? It would be the team’s best result for over a decade, but the proverbial lady hasn’t sung just yet. Behind, Leclerc in fifth and Sainz in sixth could both inherit a place when Perez has his penalty applied a much better showing for Ferrari at their home race than the double DNF from last year. But with rivals McLaren set to pick up a big haul of points, this one could go some way to deciding third in the constructors’.

Half-Italian, but racing under the Aussie flag, and now a race winner with McLaren in Italian Gp. It’s been a tough, tough season but what a result. A brilliant, cool as a cucumber drive that. Max Verstappen leads with no change in the championship lead.

Bottas watches the Hamilton – Verstappen crash on TV during his interview, describing it only as “unfortunate.” Indeed.