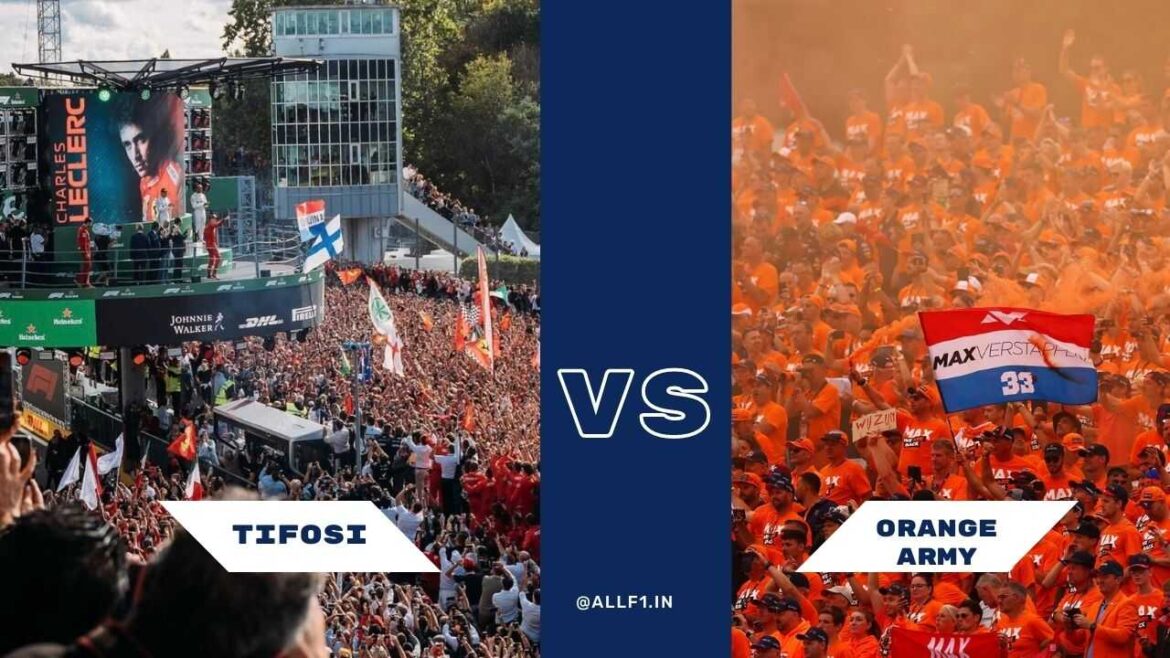 Tifosi, fans of Scuderia Ferrari in Formula One, and Orange Army fans of Max Verstappen are the two main important groups in Formula One. With Ferrari going two years without a win. Is Tifosi changing to Orange Army? In this section, we look into the history and the future of them both.

Tifosi Before and Now

Tifosi, an Italian word for people who are infected with Typhus disease, is dubbed as infected by Ferrari and their unwavering support for the Italian Motorsport. During the reigns of Michael Schumacher in Ferrari, the Tifosi grew by millions and millions the world over.

One of the most common Tifosi sights is the display of an enormous Ferrari flag in the grandstands during Formula One weekends at every race circuit, with especially large contingents showing up in Ferrari livery at home and nearby European tracks.

Monza, the holy grail of the Tifosi and the podium is above the track and the see of fans is the dream of every Ferrari driver. You can win many championships but win in a red suit in Monza, you become a god.

When Ferrari won at Monza for the first time since 2010 in 2019, a massive crowd of Tifosi went to the podium to celebrate the victory of Charles Leclerc. As revealed by Crofty during the podium celebration, there is a love-hate relationship between the Tifosi and Mercedes, who dominated Monza.

Sebastian Vettel once said Everyone is a Ferrari Fan, even when they say they are not a Ferrari Fan. Now though there is a new kid on the block, the orange army.

As the new kid on the block, The Orange Army seen in Austrian Gp’s after Max Verstappen joined Redbull, saw a massive increase in 2021, It popped up all over the world. Zandvoort Gp, where the orange army showed their might, on that day where Max Verstappen won considerably, it was an enthraling sight to behold.

Unlike the Tifosi, who support the Italian team, the Orange Army goes where Max Verstappen goes. They simply chose the national colour of the Netherlands. The Dutch Formula 1 fans were undoubtedly proud of their representative, and ever since Dutch fans show their support to Max by dressing in orange. Over time, the colour extended to everyone who supported Verstappen, regardless of their nationality.

The Genz and Home crowd

Though in F1, the teams are not Nation oriented like Football or cricket, the driver’s nationality certainly makes an impact on the sport. Lewis winning in front of the British crowd, and the very fact that when Robert Kubica races the viewership in Poland increases.

Drivers nationality is a driving factor for many deal signing. The most important market in USA and China needs to be exploited. The USGP saw a fantastic increase in sales and revenue this year as next year’s Miami Gp tickets are sold completely.

Though the Drive to Survive in Netflix have made a huge impact the crowd following for the sport is based on the driver, not the teams. A fan is lured into the sports by drivers achievement and charisma rather than the team or nationality of the teams.

In the recent F1 fan survey, Nielsen said the sample of 167,302 responses was the largest and most diverse sample ever, with female participation doubling and the average age of a participant dropping four years (since the last survey in 2017) to 32.

So the younger crowd has a huge part in the play, the outcome not different, McLaren have risen to the top of the pile when fans were asked to name their favourite team with 29.5% of the vote, ahead of Red Bull (19.8%), with Ferrari (17.9%) dropping from first to third and Mercedes (11.9%) down to fourth. Aston Martin has doubled their support since rebranding from Force India.

According to my guess, Tifosi is going nowhere, but people who watch because of the Netflix show didn’t see them in the first season, then they haven’t really been championship contenders since and haven’t been racing for a win for a few years. It’s not that the Tifosi are tuning out, it’s that new viewers aren’t as big a fan of them as they are the teams that are winning or have popular drivers. Charles and Carlos are both great, though, so I can see that changing as Ferrari get back into winning ways.