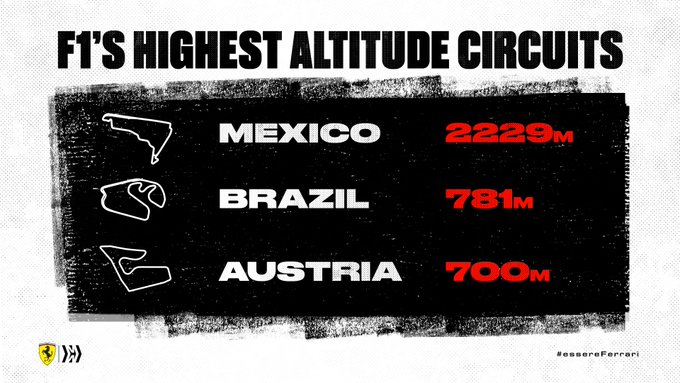 Mexican Gp, has been considered the Redbull stronghold, but with 2 victories under the belt for Hamilton and Verstappen, it is important to look into the strength and weaknesses of each power unit in terms of altitude. In this section, we look into the same in detail.

Mexico, Brazil and Austria are the tracks at the higher altitude in the calendar, Mexican Gp circuit at 2200 meters above sea level, Brazil 760 mts and Austria at 720 mts respectively. In all these tracks Mercedes has underperformed in comparison to the Redbull.

The track is twisty with a lot of low-speed corners. Redbull with its high rake concept has a lot of downforces. That’s why Redbull even though Mercedes was hounding in the last 3 laps in Austin was able to keep ahead in the twist and tight sections of the track moving out of the DRS contention.

In Mexico too, the DRS detection point for Zone 2 is after the stadium hairpin which is an advantage for Redbull, but the Zone 1 detection point is between turn 09 and 10 after the S section, which is an advantage for Mercedes. Since Mercedes straight-line speed is much higher than Redbull it will be quite the battle if there is a wheel to wheel battle.

The Turbo and Rake Angle

The air is 25% thinner at that altitude, so the cooling is not effective since the air is thin. Less air thickness means the drag is less. But that’s a good thing right? not so much. Since the air is thinner there is less oxygen in it so the turbo had to spin faster to compensate for the lack of pressure.

The Turbo will run hotter, the Engine will run hotter and since there is also less air the cooling of the breaks and engine is less. Redbull’s Renault Engine worked well in these conditions since its packaging is so effective for cooling in high altitudes like the Mexican Gp.

When Rebull changed to Honda in 2019, it also worked well in high altitudes like Mexico and Brazil. The High Rake high downforce design philosophy of the Redbull car is much suited for the Mexican Gp.

Mercedes on the other hand is suffering reliability issues after pushing the engine so hard to catch Redbull and to increase performance gains. It is possible Hamilton will take a new ICE here in Mexican Gp next week and put Bottas in the front row to defend Max Verstappen like in Turkey.

Due to the altitude in Mexico PU power is not what wins the race. Aero package and correct setup is the main factor in Mexico. Split or not split turbos will suffer due to the density of air so all teams will suffer in Mexico. I expect to see a couple of DNF’s with power unit failures for the same reason.

The reason why the Mercedes team is not good in Mexican Gp is that till recently their main advantage was the power of their power unit. Mexico is one of the tracks that aero package is more important which RB has been very strong the last few years. This season RB have both, a powerful PU and an excellent aero package that favours them.

With Slow speed corners and high altitude combinations, the Mercedes engine is at a distinct disadvantage here in Mexican Gp. But Mercedes if somehow pulled this one out of the bag. It will be a fantastic championship battle for the next 4 races.