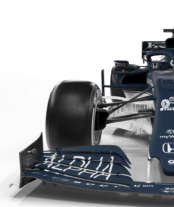 AlphaTauri was the second car to be launched ahead of the upcoming F1-2021. With a fantastic 2020 season behind them, the team has let Daniel Kyvat off its hands and roped in the young Yuki Tsunoda from the junior red bull team. Partnering with Pierre Gasly, who is their star player after a fantastic win in Monza last year.

Riding on a strong season AlphaTauri aims to in the top of the mid-field battle for 2021. It’s a high target and achievable only if Aston Martin and McLaren are knocking on the doors of Mercedes and Red-Bull, Winter testing next month will give some perspective but the curtain revealer at Bahrain on March 28th will be a massive showdown.

The car AT02 an evolution from its old AT01 which in-turn is an evolution from STR-14. The new regulations for 2021 aren’t that massive so the overall look and shape of the car the same. The overall weight of the car increased from 746 kg to 752 kgs. This challenges the way handling is setup to compensate the weight bias balance.

Honda, the engine supplier’s last year in F1 before pulling out would like to go out with the bang to keep their options open for the F1 return. So the RA621H and upgrade from previous RA620H will be one to watch for. Since AlphaTauri is a fashion brand, the looks are as much important as its functionality. The blue and white livery, a change from white and black livery is a thing to behold, the fashion and clothing line of the brand almost certainly on board with the looks.