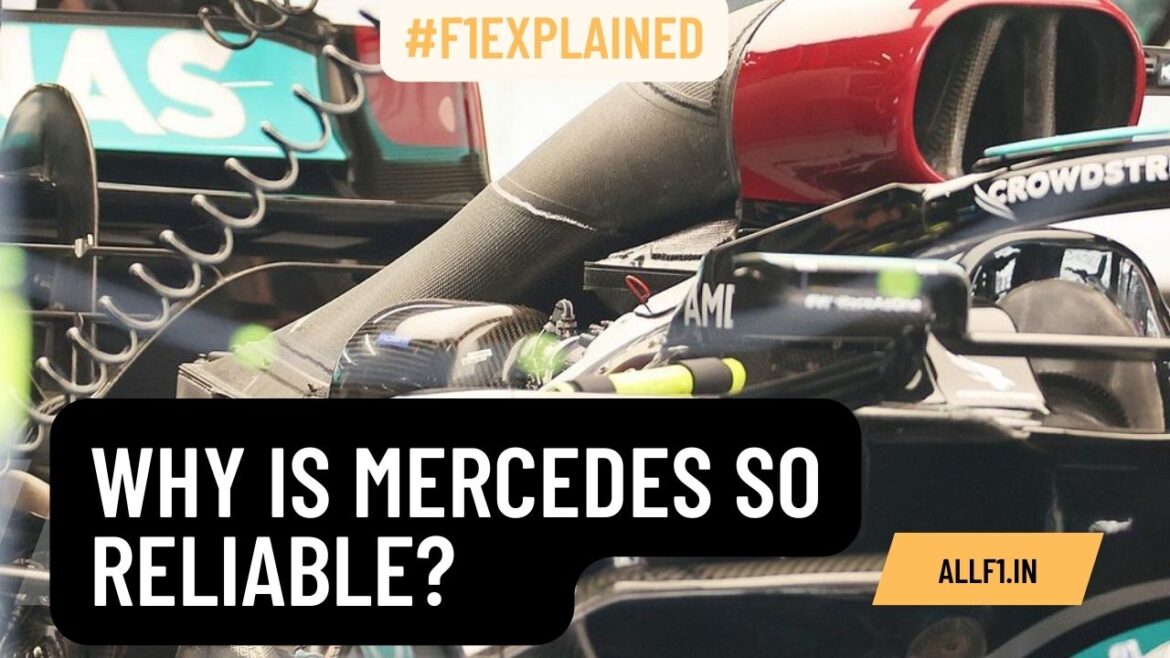 Mercedes F1 has not many things to pat their backs, but the reliability of their engines is one thing that they can be super proud of. After 14 rounds this season they haven’t had any reliability issues in the car and they hope to continue this form until the end of this season. In this section, we look into why Mercedes F1 is so reliable while their Ferrari and Rebull counterparts are struggling.

Mercedes-Amg petronas f1 team hit it right the first time in 2014. So they never had to redesign from scratch like Honda or Renault or scrap 2 years of development like Ferrari. So they have been fine-tuning the whole hybrid era.

Also, they have loads of wear data gathered from all the engine modes they have tried through the years. Detuned in 2014, or full beans in the final part of 2021. The engine was so ahead of its time it dominated the 2014 Italian GP in fuel and engine save mode.

When Mercedes entered F1 Daimler executives were very clear with the team: “We can tolerate a Mercedes ending the race in the last position, but we will not tolerate the image of a broken down Mercedes on the side of the track.”

This philosophy of the Mercedes Amg Petronas f1 team has been embedded throughout the design language in Mercedes F1 and it is what makes them so reliable.

Mercedes F1 engine in 2022 is reliable but why is it playing catch up to Ferrari and Redbull? Engine development is frozen for 2025, but Ferrari went for a really fast engine with the expectations they could work out the reliability.

The above said philosophy and possibly engine modes this year. Tough to crank it up when the aero was so bad for Mercedes F1 and their customer teams to be competing. The Red Bull was very compact and made to be as small as possible, they did some clever work to get more power out of it including the Honda aerospace department working on the turbo compressor wheel.

The compact engine was all about making the car more aerodynamically better. Mercedes approach was a big reliable block tuned down for reliability. Remember the “Spicy” engines from Brazil and Abu Dhabi last year? They were the same engines, just Mercedes knew they only had to last 2 races and turned them up.

Is Engine Mode the only thing?

The Power Unit is made up of six different elements – the Internal Combustion Engine (ICE), Turbo, MGU-K, MGU-H, Control Electronics, and Energy Store.

These elements are combined to deliver different Power Unit modes, which drivers and teams can utilize throughout a race weekend. PU modes are a combination of settings that adjust the performance of the ICE as well as the flow of electrical energy.

The ICE performance is changed, for example, by varying the amount of fuel that is injected into the combustion chamber or by changing the timing of the ignition. For the Hybrid side of the Power Unit, the modes will alter the interaction and scheduling of the electrical energy for both deployment of the 120kW (maximum) MGU-K and recovery of both the MGU-K and MGU-H.

The Mercedes F1 car as we know has aero limitations that are causing the slowdown. Engine modes are better used when the aero package is sending the right amount of air to the right places.

Mercedes team boss Toto Wolff welcomed the finishing record of his squad but did not believe that it had created an invincible car.

“It’s funny that both teams keep having their cars stop,” he said. “But you can’t be complacent about that because it can swing in the other direction very quickly.

“We’re happy about our reliability. Last year, when we look at how we went with the engine, we had the other phenomenon [and lots of problems]. That’s why I don’t want to get too excited too soon.”