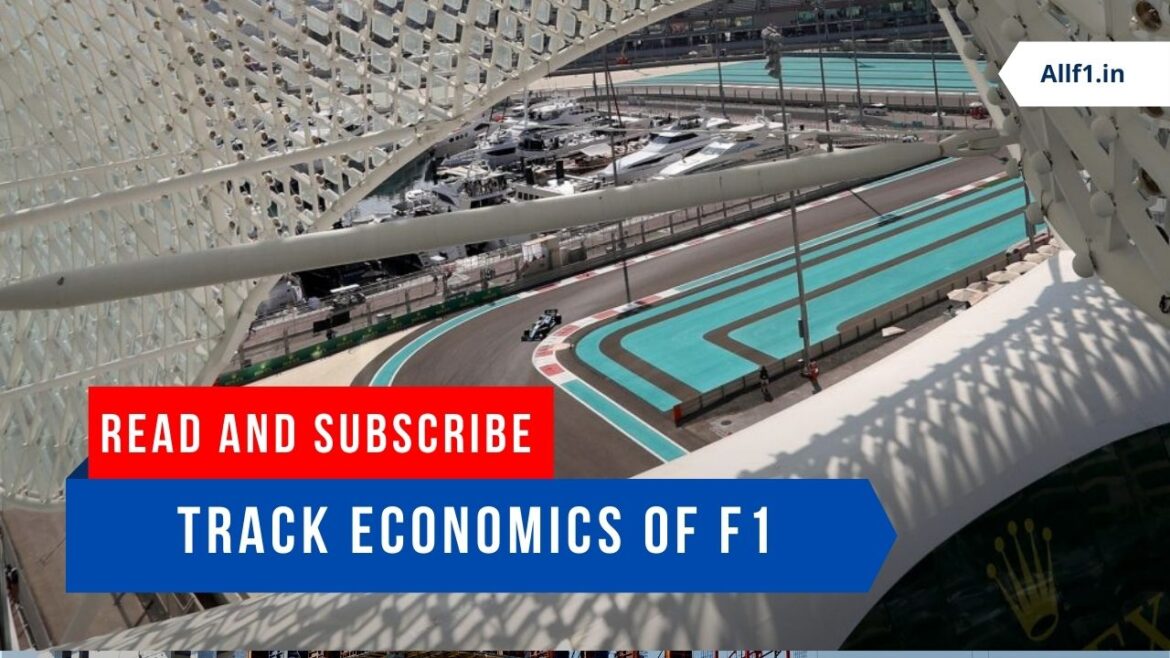 Track Economics in F1 is a widely popular subject after the F1 2021 season. There were many new tracks, Zandvoort, Jeddah, Qatar and changes to many. But is it profitable to host an F1 race? In this section, we look into the track economics the costs involved and many others.

How Formula 1 Race is Funded?

Most last season was funded by respective governments of the countries where the race was hosted, around $600.5m was invested by the governments in hosting F1 races in their countries. In most cases, the local government is the race promoter who pay a certain fee to host F1 in their countries track. The race fees paid by promoters is the single biggest source of revenue for F1’s parent company Liberty Media.

But Liberty Media (parent F1 company) gets all the tv broadcast revenue, trackside advertising and hospitality revenue, having said that some of the tracks are allowed to have their own advertising banners etc but they have to pay an extra fee to f1.

Circuit promoter fees account for 33.6% of F1′s annual revenue and on average it costs around $40 million a year for a promoter to host a Grand Prix weekend. Some of the old tracks like Italy, Germany, Britain, Spain pays below average race fee. But the contract to host a Grand Prix is always around 7 to 10 years long and the race fee accelerates every year during the duration of the contract.

For example, if a new circuit signs a 10-year contract with F1 to host Grand Prix starting with 17million a year, the race fee will accelerate every year for the next 10 years, where the race fee will rise from 17m to 40m per year. Since most of the new f1 race contracts are of 10 years it takes race fee to 40m a year towards the end of the contract and for the duration of 10 years, a promotor has to spend £272 million just on race fess while another £360 million on maintenance and other costs to host F1 race that takes the total of 10 years to £600million.

So bearing the above in mind, let’s look at a few examples. Here is Monaco:

Now the big bonus for Monaco is that they pay no fees to F1 in order to host a Grand Prix there. So whatever costs they incur, for putting the street circuit together every year, are the only costs they have to face. As a result, given what they make in revenue every year (Covid-19 effected races being the exception) usually offsets such costs and hence they make a financial profit.

Meanwhile, there have been several Grand Prix, which have come and gone, because they have been far too much of a financial burden on the hosting organisation in question. One which springs to mind is the failed Korean Grand Prix:

Now there are a lot of reasons why the Korean GP disappeared, some involving legal and domestic political issues, and that’s a pity because Korea offers a lot to the global auto industry, but then F1 boss Bernie Ecclestone got to the heart of the problem when he said they simply couldn’t pay their fees any more. And why? Well, they went bust because it lost them millions in running the race.

Elsewhere, though, running a Grand Prix at a loss isn’t unusual, but the local government is prepared to cover any losses that the organisation in question suffers. Take, for example, Take the GP held in Melbourne Australia.

Most years the Australian Grand Prix loses money. One year it was reported to have lost $50 million. And without government support, it probably would have gone the way of Korea. But the Victorian state government supports it because they believe that the GP brings in several hundred million dollars of revenue for the city of Melbourne to enjoy due to visitors to the race spending their money around the city for the week or so that they’re there. So in this last instance, the organisers are prepared to lose several million dollars every year so that the city as a whole can make an impressive “profit” from the race as a result.

Needless to say, Melbourne isn’t alone, in this approach, and indeed several of the Grand Prix is done for the same reasons, whilst it also brings some international prestige to the city &/or state and country involved. This is certainly why we’ve got the Baku Grand Prix along with the ones in the Middle East as well.

One thought on “Track Economics, Is Hosting F1 Wildly Profitable ?”