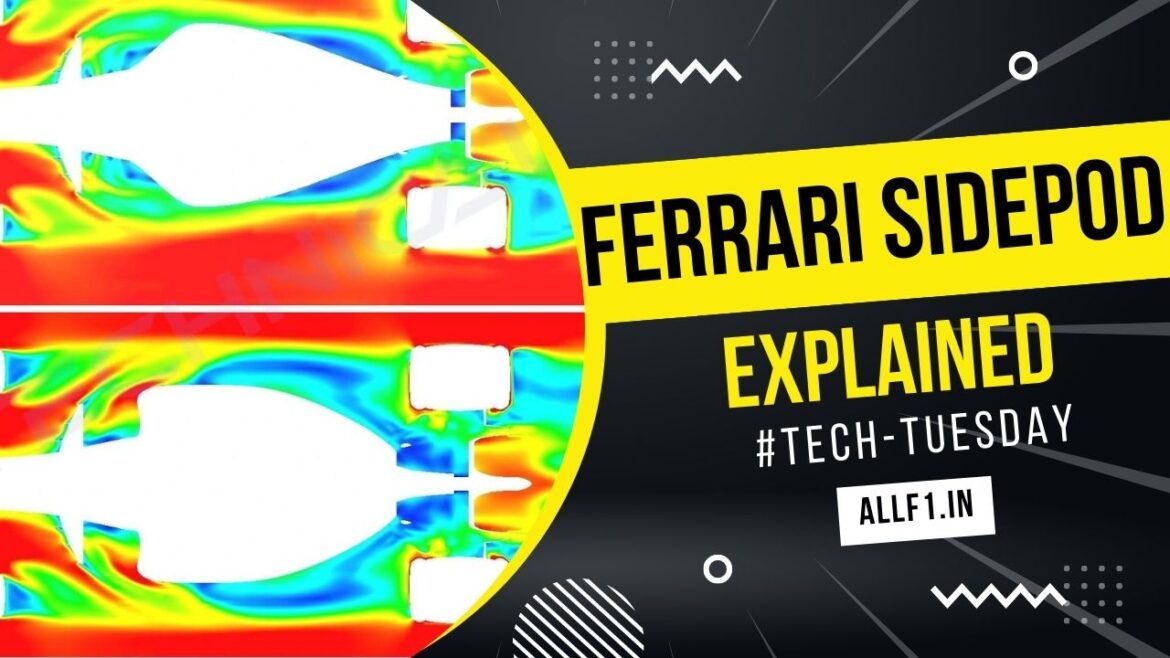 In this edition of Tech Tuesday, we look into the ingenious way why the Ferrari F1 -75 is another extreme interpretation of aero regulations of the 2022 F1 Rules. This section also explains the CFD drawings and how it manages to reduce drag and improve downforce.

Unlike the old-school ground effects, the car won’t have sliding skirts and instead has a range of fins underneath to minimize any disturbance. To make sure each team uses the floor as it should, a standard tea tray will be developed to attach to the front of the floor.

The big aerodynamic challenge in this area of the car remains how to maximize the speed of the airflow into the floor (now via the tunnel inlets) and down the sides and what the most efficient trade-off is between those separate flows.

But the rear surface of tub-sidepods works together with the diffuser ramp’s upper surface to form an area of higher pressure. This adds rear downforce directly on the floor but also increases the pressure on the rear of the tub-sidepod -reducing the drag. Compared to the base model, the tub-sidepod alone had 50% less drag. This looks a lot like the main reason Ferrari extended the sidepods all the way to the rear – to use this effect and reduce drag. So – F1-75 sidepods are not draggy.

At 0.3m the difference is clear, as well as the difference in airflow towards the rear tyre. At tub-sidepods model, the barge-board-like geometry created a wake going towards rear tyre, and the difference in pressure can also be seen at the first comparison picture. The low-energy wake hits the tyre and pressure-increase is a lot lower. Overall, and take this with a grain of salt, rear tyre drag decreased by more than 10% compared to base model.

Since Ferrari had to extend the sidepods to use the ramp pressure increase to reduce drag, it looks like they made the tub to offset the lift this generates. This is very clear when compared to aston-like sidepods. Afterwards, Ferrari F1 -75 surely used all effects combined with cooling channel design and gills.

Suggested Reading: How Green is F1

A Scuderia Ferrari source told Formula 1 journalist and analyst Giuliano Duchessa that the new Mercedes car is extreme, but the Maranello team also thought about the same development direction. In the end, Ferrari decided to abandon the idea and focus on their current design and its potential.

As a result, Ferrari is not scared of the radical ‘no sidepod’ look on the Mercedes W13 which proved to be a good solution as it turned out to reduce drag and improve downforce.