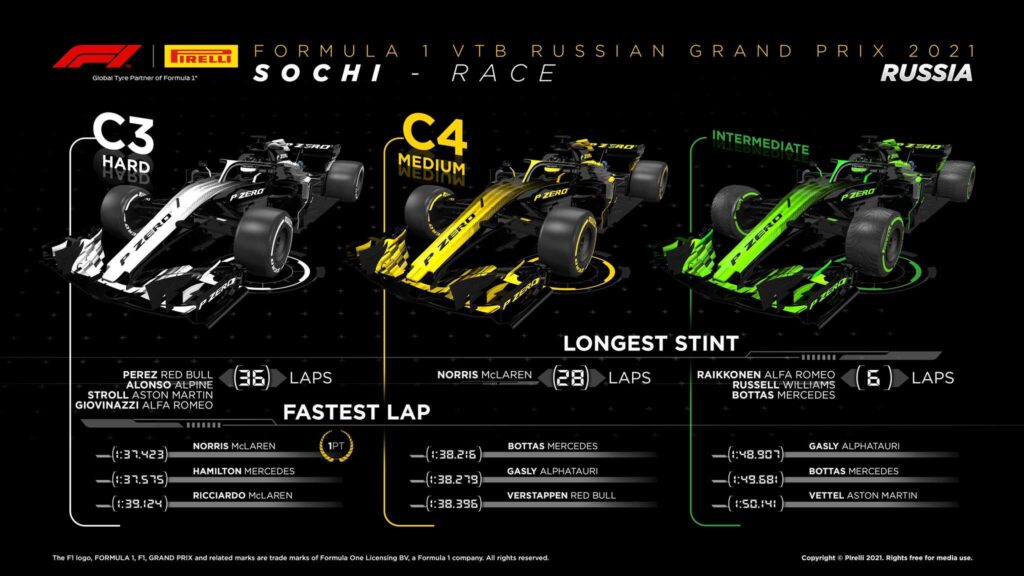 Russian Gp 2021 Tyre Analysis for what it is worth, starting with a free choice of Tyres after a wet Qualifying made it interesting. In this section, we look into details of how all the tyres performed and how they came into strategy play during the end of the crazy last 5 laps.

Pirelli Motorsport gave us the softest rubber in the range for the Russian Gp. C3 for the Hards, C4 for the Medium and C5 for the soft marked red-walled tyre.

Since the start tire is of free choice because it was wet in Qualifying, there were different strategies that the teams were thinking. With multiple front runners like Bottas, Max Verstappen and Leclerc along with slow runners like Giovanazzi and Latifi all starting from the back of the grid, the stint options are limited.

The Quickest was one stopper. The top 10 runners all started on Mediums except for Alonso in P6 and Perez on P8. Sergio Perez was an alternate strategy to Hamilton who started on the Mediums so as to go longer and benefit from the overcut and gaining track position in Russian Gp 2021.

The Back Markers all started in the Medium to gain places in the start and use the carnage in Turn 2 to their advantage but since everyone got through alright and that was the end of it.

Since there are no softs to be seen in the grid. There are two strategies in play for the Russian Gp 2021. The Medium runners would look into pit by Lap 17th to 22nd and Hard runners on Lap Lap 27 to 34. The Medium Tyres last around 22 laps so a 53 lap race can be done easily.

Lando Norris after overtaking Sainz was able to go Target +6. The longest stint of anybody on the mediums. The Mclaren is kind on the tires and after the threat of Sainz is gone after he pitted in Lap 14 to the hards a strange decision helping Hamilton to get a massive advantage at the end stages.

This Ferrari’s pitstop is to cover Sainz position from Lance Stroll who pitted for the Hards at Lap 12. This was a strange decision and put him out of the points eventually. Williams was reacting to the Aston Martin pit window as well. Even if a two stopper is planned it’s still too early. Were they reacting to the gap in the field, I don’t know but it is a bad call nonetheless.

Everyone talks about how Perez saves Tyres and can go longer, today is not the case as he was chasing Hamilton and was keeping up to him all along. So his Hards lasted Target +2. Alonso did the same stint as Perez and went onto mediums and both were looking at the Podium by that stage. Perez was a definite favourite as he overtook Daniel and wasn’t stuck behind him. But the weather had other ideas.

Verstappen who chewed through the tires was looking at a Top 5 finish at the end with 2 stop strategy. Staring in P20 in a brand new set of hards he was able to pick places one by one and by Lap 17 he was chasing Alonso in 5th. By Lap 18 he comes on the radio and says that his front left is struggling still he was doing purple sectors and setting fastest laps.

The Pitstop delta here is quite large at 25 seconds and the pit lane being tight and learning from Sainz mistake he was asked to save for tyres and by Lap 26 he was done with the Hard tyre and went on to the softs. They would have taken a page out of Norris stint of 28 laps in a Medium tyre but they failed to take into account the clean air and tyre management that he was running.

He was struggling and the gains he made was dropping as he was on 7th after Lap 44 after Alonso overtook him for the 6th place. But the weather has other ideas.

When it started drizzling lightly on Lap 45, Mazepin was the first in Pits for Inters at Lap 46. Yuki, Bottas, Kimi and Russel all came in on Lap 47 after the weather Radar confirmed that it going to increase. Yuki was put on softs, I would like to know the thought process of it but it was idiotic.

LAP 47 and Lap 48 was the time to be on inters. After that, it was too late. Verstappen, Sainz and Ricciardo, Kimi and Bottas took the right call and were net gainers. Alonso, Perez, Norris, Leclerc, Ocon were net loosers.

Ultimately though, it was the intermediate tyre that made the difference, with the teams able to use their experience from a wet qualifying to extract the maximum performance from it when it mattered at the end.