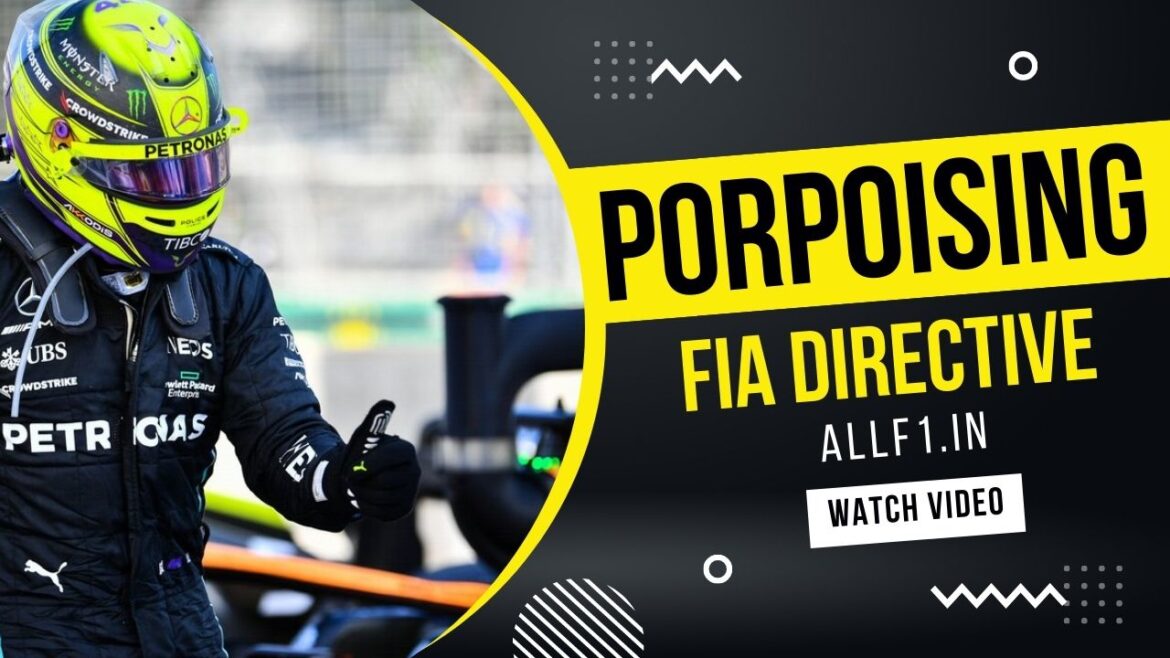 Porpoising is the hot topic after Azerbaijan Gp when Hamiton gingerly got out of his car at the end of the race. A lot of drivers were complaining about the issue and FIA has stepped in to solve the issue. But after Mercedes had been vocal about the rules the directive has come in as a shock to Mercedes. In this section, we look into the Techincal Directive that FIA has issued and the debate around it.

Right, in the simplest terms, porpoising is an aerodynamic phenomenon that F1 cars have started to suffer from since the adoption of the so-called ‘ground effect’ philosophy, where the air is sucked underneath a car to pull it down onto the track at high speed, rather than over the top of the car to push it down.

The trouble is, the faster you go, the further a car wants to be sucked to the floor. And if it gets too close it can cause the airflow to stop – or ‘stall’ – meaning the downforce created suddenly drops off a cliff. At that point, the cars spring upwards. Once the car’s floor is clear of the ground, however, the flow of air kicks in again and the car is sucked downwards once more. This aggressive bouncing is called porpoising.

Why some cars are doing it Aggressively

While Mercedes has engine dynamics which has a lower top speed so they have to reduce the drag so they drop the car height aggressively. While Redbull and Ferrari have a higher top speed so they can increase the height of the car to a little bit to have the drag co-efficient match the engine performance so porpoising is less compared to Mercedes.

In the last race Azerbaijan Gp, the Mercedes was running so low that instead of aerodynamics being the issue here the cars were actually hitting the bumps in the track and Bouncing. What Mercedes thought is that FIA will give a minimum height for the cars so all cars have to stick to that limit which in turn causes the speed reduction in all cars up and down the field.

But the FIA Directive went down a different route saying that cars that are bouncing more should come under closer scrutiny of the planks and skids, both in terms of their design and the observed wear and proposes the acceptable level of oscillation.

“The exact mathematical formula for this metric is still being analysed by the FIA, and the F1 teams have been invited to contribute to this process.”

The FIA adds: “In addition to these short-term measures, the FIA will convene a technical meeting with the teams in order to define measures that will reduce the propensity of cars to exhibit such phenomena in the medium term.”

The Losers are definitely Mercedes and Mclaren, but there are no winners here because the Ferrari and Redbull have the same amount of porpoising in their cars.

Mercedes in Baku was bottoming on the straights due to all the bumps. Check the rest of the track and you’ll see porposing is affecting everyone. The FIA has issued a TD that doesn’t intervene at all but does intend to examine the evidence of porpoising, rather than the cause hardly inspirational if the outcome is to tell teams to stop porpoising’, rather than admitting the ground effect has an implication on the design.

“In a sport where the competitors are routinely driving at speeds in excess of 300km/h, it is considered that all of a driver’s concentration needs to be focused on that task and that excessive fatigue or pain experienced by a driver could have significant consequences should it result in a loss of concentration.

The governing body made it clear that it was playing the safety card mainly on the grounds of driver concentration. It means that any changes do not require the unanimous support of teams. Stay tuned to allf1.in for updates on Canadian Grandprix and Porpoising issue.