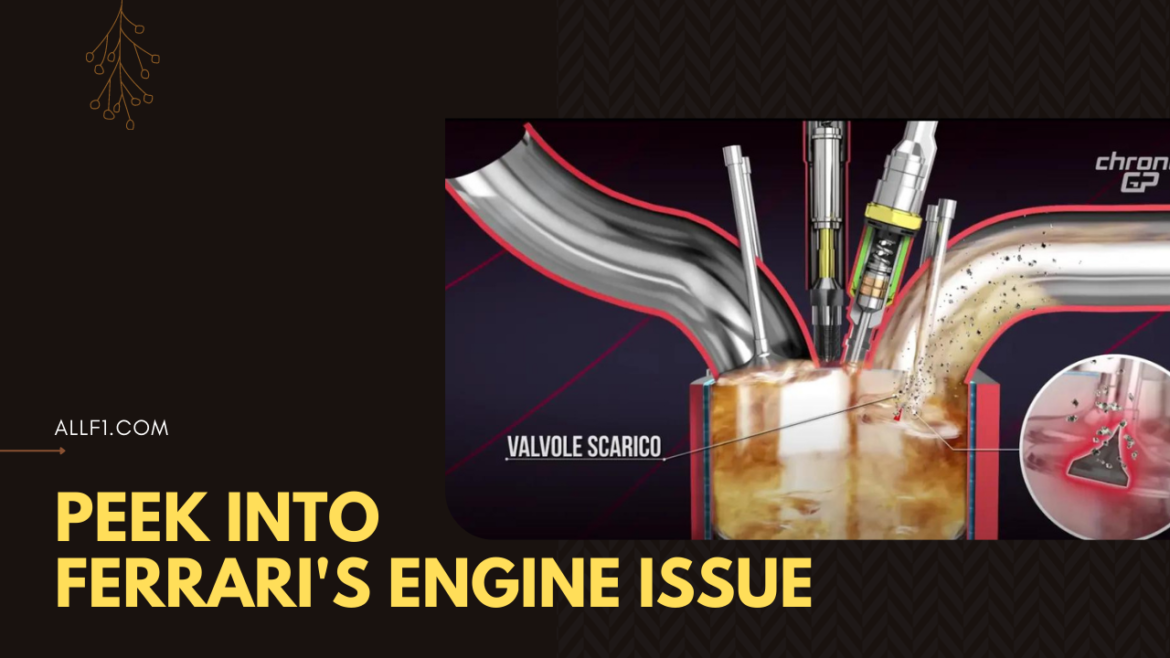 Ferrari off late is finding reliability the Achilles heel for the 2022 Formula One World Championship. With 34 points deficit in the driver’s championship and a huge 80-point deficit in the constructor’s championship, all is not well in the Ferrari F1 camp. In this section, we look into what the issue that’s plaguing the Maranello outfit.

It’s been reported that Leclerc’s failure at Azerbaijan Gp was the ICE and Turbo Charger. This failure is because, exhaust valves overheated and created metal debris, which then reached and damaged the turbine. This is because the team attempted to save fuel in the third phase of fuel injection on high-consumption circuits such as Barcelona, Baku, and Montreal.

The three phases of of fuel injection are pre-ignition, ignition, and post-combustion. The third injection of fuel is supposed to cool the cylinder and there’s no ignition in this phase. As less fuel was used for cooling in the third phase, the engine eventually overheated and caused the failure of the exhaust valves.

So Ferrari would have to redistribute the fuel in this week’s Canadian Gp to use less fuel in the first injection and more in the third which would keep the engine cooler but also reduce power. Looks like the RB will maintain the straight-line advantage.

While Leclerc’s issue was a slam dunk, Carlos Sainz’s problem is not well reported all the team had to say was that Hydraulic Components from Carlos have been already examined. A short-term fix is in place for Canadian Gp while work is going on mid/long-term solutions.

Ferrari brand ambassador and former long-term test driver Marc Gene is confident the Maranello team will be able to turn things around and feels there is no reason why the Italian side cannot pull back their deficit in both championships despite the recent setbacks.

“Of course there are positives. The main one is that was a very high-speed track where you would have thought maybe Red Bull was stronger, and I think Charles would have won the race. The hard tires made it to the end with Ricciardo and Gasly.

So we have the pace, that’s the main thing. You want to have the pace and then, from that, you have the reliability. But we were more aggressive than Red Bull. I’m sure it was the right strategy call, so that shows the team is not so influenced by the difficult week we had after Monaco.

But if you think about the championship, and you look now at the classification, it’s a very high mountain to climb. You can do it with a car as fast as ours. But today is something worrying because not only Ferrari but two other cars had other issues.” -he added.

Ferrari looked pretty reliable at the start of the season until they realized RB has faster straight-line speed. It is possible that after Miami, they went on to higher engine modes and pushed the engine to the limit. Would going back to a lower engine mode bring the reliability back? if in circuits where straight-line speed is not important the strategist makes sure a mess is created.

We will have to wait and see the next weekend in Silverstone as this week Ferrari is staring in the back of the with a 10-place penalty for Charles Leclerc. With Sainz not performing up to the mark we will also keep an eye on the customer’s team’s performance. Stay tuned for all updates in allf1.in