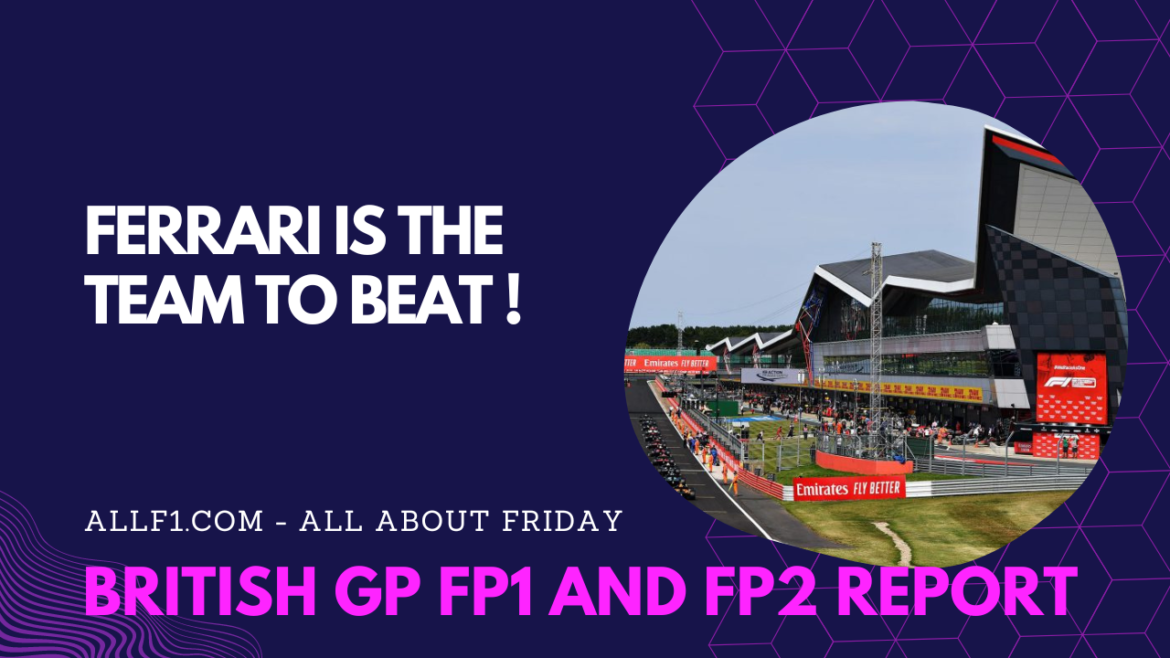 Welcome to the 77th British GP, here at Silverstone, for the 10th round of action of this exciting 2022 season. We are a few minutes away from seeing the drivers out on track, as we get set for another fascinating weekend.

The Risk of Rain is 100%. Rain means teams will find it harder to evaluate their upgrades in FP1. Russell and Hamilton are straight out for Mercedes, giving the crowd something to cheer as the clouds begin to unleash at the British Gp.

Currently out on track are the two Mercedes, and the two Ferraris, as the rain continues to get heavier. Perez and Ocon, in the updated Alpine, join Leclerc out on track as they navigate their way through the rain. Alonso joins the fray in the other upgraded Alpine.

Gasly is informed by his team that the rain has stopped as the sun begins to emerge from behind the clouds. Championship leader Verstappen has now emerged from the garage for the first time, along with Norris. It will be interesting to see which driver is first to make the switch to the slick tires.

Hamilton heads back out for Mercedes, still on the inters due to the wet section of the track between Brooklands and Copse, which means the outright lap times won’t be challenged for now. Still not much to report at the moment. The track is empty, as all the drivers are currently tucked away in their respective garages – except for Hamilton, who has walked out of his garage to wave to the crowd in British Gp.

Hamilton has made the change to the soft tires, Everyone is going on softs. Bottas has gone quickest, though Hamilton set the fastest first sector by quite a distance before backing out of his lap. There is now a flurry of cars coming out on the soft tires.

Not the start you would want to your team’s home race, as Stroll brings an end to the session by going off into the gravel, as it looked like the Canadian driver lost it entering Copse.

FP1 did not produce a lot of on-track action, as the drivers were largely confined to the pit lane due to the wet nature of the track. However, with the sun now out and with the track all but dried up, expect a busy session, as the teams look to make up for the lack of running earlier, as they get ready for qualifying tomorrow afternoon.

The drivers are piling up at the end of the pit lane as they look to make up for their lack of running in FP1. Sainz, in the Ferrari, leads the drivers out and is followed by a train of cars. Everyone is out. Here come the Ferrari duo of Leclerc and Sainz, and they go first and second respectively. That bumps Verstappen to third, Max had gone a tad wide at Turn 9, and Perez to fourth.

There is a lot of flow vis on the right side of Albon’s upgraded Williams, as he goes into seventh. Also improving are Verstappen and Hamilton, who are now second and fourth, respectively. Hamilton may be vaguely in the mix but complains: “We’re bouncing a lot.” Clearly, the latest upgrades haven’t removed the porpoising problem.

Russell pops his Mercedes into fifth, on the soft tire, but we are yet to see his teammate Hamilton emerge from the garage. Also still in the pits are Red Bull duo Perez and Verstappen. Verstappen on his first lap on the soft tire goes up into third place but drops down to fourth. Hamilton crosses the line and goes second, just over a tenth behind Sainz. That is a very promising sign for Mercedes. Perez, now out of the garage, improves but goes seventh.

That is the end of the first day of running here at Silverstone, as Sainz sets the fastest time of the day to top the leaderboard in FP2. Hamilton comes home in second place – his highest practice finish of the season – while Norris finishes in third.

The top 10 drivers are covered by exactly a second. Many teams brought upgrades this weekend, and the signs are positive for not just Ferrari but Mercedes and McLaren too. However, it is still early in the weekend, and the likes of Alpine and Aston Martin still working out the kinks.