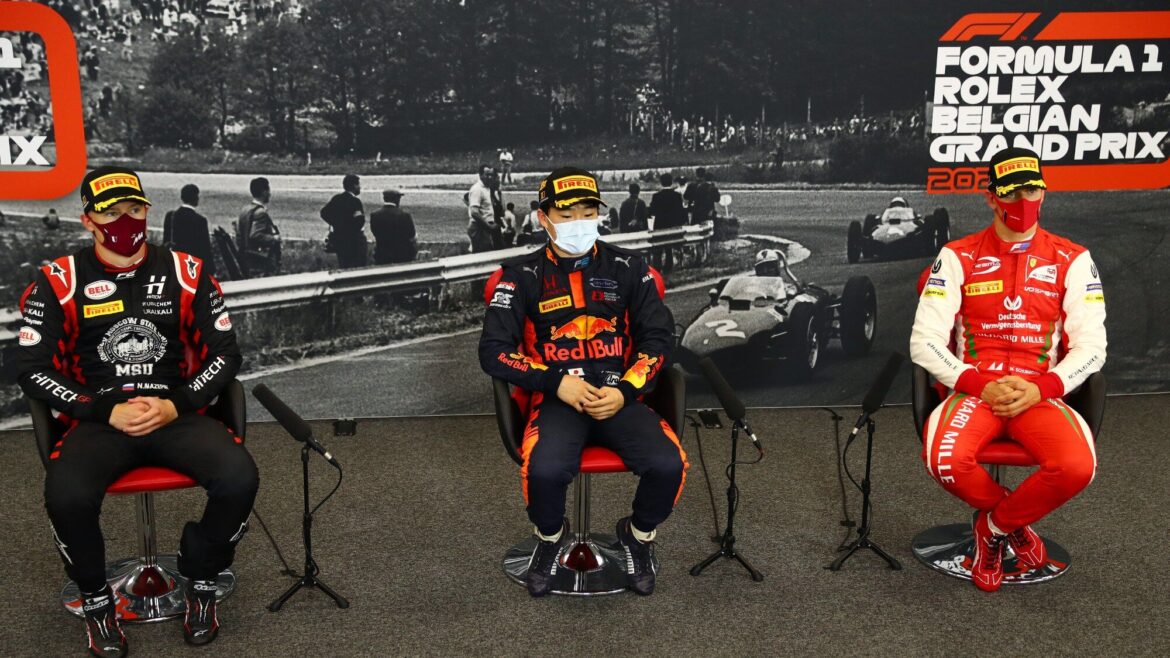 F1 Rookies, have been a hit and miss this year. Tsunoda, Mick, and Mazepin the rookies this year in 2021 have a lot to prove. In this section, we look into what’s their positives and negatives over 9 races.

The F1 Machinery is a bit more complicated than F2. Unlike F1, every car is completely identical to each other while these drivers are backed by the same race engineers to ensure that the talent is recognized instead of victory of car specs. All teams in F1 design their own chassis and aerodynamics but as mentioned above about F2 cars, all the designs and specs and the same, so everyone got equal resources in the car.

Formula 2 also uses the newly inducted engine, the naturally aspirated 3.4L V6engine, but the horsepower and turbo power are lower which brings a difference in speed. the horsepower in an F2 car rpm of 10,000 while F1 cars hit up to 18,000 rpm. Thus, there is still a difference of some 20-30 Km’h between F1 and F2.

Mercedes’ Lewis Hamilton, who took pole with a time of 1:15.584, followed by F2’s Uni-Virtuosi’s Guanyu Zhou, who took third on the grid with a 1:28.601 (two-tenths down on Callum Ilott’s pole time) – a massive gap of over 13 seconds! That time was 10 seconds slower than 20th-placed Nicholas Latifi in the Williams.

So for the F1 rookies to get hold of the Machinery and control them is a big deal. No one is expecting them to compete at the highest level. Their race goal is to have a clean weekend. Everyone makes mistakes but, how fast they iron out set’s you apart from F1 Rookie to F1 Champion in few years.

The Mistakes that F1 Rookies make is the one to watch for. Mazepin has earned himself a Mazespin following. He and the team is taking it in the chin, but it hurts. The shunt for Mick in Monaco was a wake-up call. He then has a clean weekend learning from it. Yuki Tsunoda after the Baharain Weekend where he performed incredibly well can’t keep it out of the wall. Only during Austrian Gp, he sort of had a clear weekend.

Heading into the season, he has had to deal with the limelight that comes with being Michael Schumacher’s son throughout his entire life, and even more so since he started racing under the Schumacher name in 2015. And he has dealt with it remarkably well.

After nine rounds, Mick is the most improved among the F1 Rookies, this year. Schumacher has shone brighter than his team-mate Mazepin and he feels like a “different driver” now he has some experience under his belt.

Mick has finished every race so far this season with the best position of 13th at the Azerbaijan Grand Prix, and he is in line with his main goal for 2021 of showing a steady progression from the opening round.

He might be promoted to the Alpha Romeo if Kimi retires at the end of this season, or when he does so. All Mick needs to do is keep it out of the wall. Let’s see how it goes.

Mazepin brings huge backing that is central to the survival of Haas as an F1 team, so from that perspective, he’s not going anywhere soon. His off-track conduct aside, Mazepin is seriously aggressive at times. His initial spinning days are now replaced by blocking drivers now.

Mazepin is correcting mistakes, but the problem was that he had fallen further behind the rest of the pack, with Schumacher having improved his time in comparison to the tune of almost four-tenths of a second. His lack of confidence with the car means he is unable to progress at the same rate as his rivals during sessions.

His ignoring blue flags are becoming a habit this season as more and more penalties are handed out for ignoring the blue flags. In a recent interview, he said

“I really liked blue before this F1 season. I have been wearing blue almost every day of my life. But in the race, if you just get caught by one car and then you slow down and you go on the marbles, you try to restart at a certain pace which is most of the time not the same as you were, and then you get caught again.

“You just fall into this very awful place. The worst thing is when an engineer tells you there are five cars, altogether within two seconds of each other, all for blues, you need to slow down, and that’s what happened last weekend.

“It is the story of this year for me, unfortunately, and I think with a slight increase in pace we could find a lot of total race time because we would have fewer blues. It’s definitely a challenge to lose a little time as possible on it, but with the amount of practice we’ve been getting this year, I am probably going to get good at it soon.

Yuki made a fantastic debut in Bahrain this year. Scoring points in the first round, overtaking Fernando Alonso. But his pace and talent were short-lived. I don’t have an issue with his performance but his conduct needs to be checked.

His confidence got inflated to overconfidence in Bahrain. He got himself to believe he’s F1’s new rockstar and then everything came apart. After just a couple races later it’s the opposite, that’s how quick it changes when you take your eye off the ball.

Comments after the crash made it even worse as and the team dynamics are spoiled for him after he’s thrown them under the bus trying to dodge criticism for his own poor performance. If he continues to make such immature and inflammatory comments, it could create some real problems within the AlphaTauri camp, which would in turn create some real problems for him. Nobody can achieve success if they don’t have a team that’s fully behind them, and he won’t have a team that’s fully behind if he unfairly criticizes them.

Surviving and thriving on that circuit is the ultimate test for any F1 driver, and if the F1 Rookies can do so, it will go a long way to maintaining their reputation as one of the sport’s most exciting prospects. If more errors do creep in meanwhile, they need to show some maturity and take responsibility for their actions. F1 Rookies almost definitely has the talent to go far in F1, but talent alone isn’t enough.

The FIA’s job has been busier than ever.

Hamilton has been summoned post-FP3.

FIA: "The FIA is currently finalising the assessment of the 2021 financial data submitted by all Formula 1 teams. Alleged breaches of the Financial Regulations, if any, will be dealt with according to the formal process set out in the regulations.”