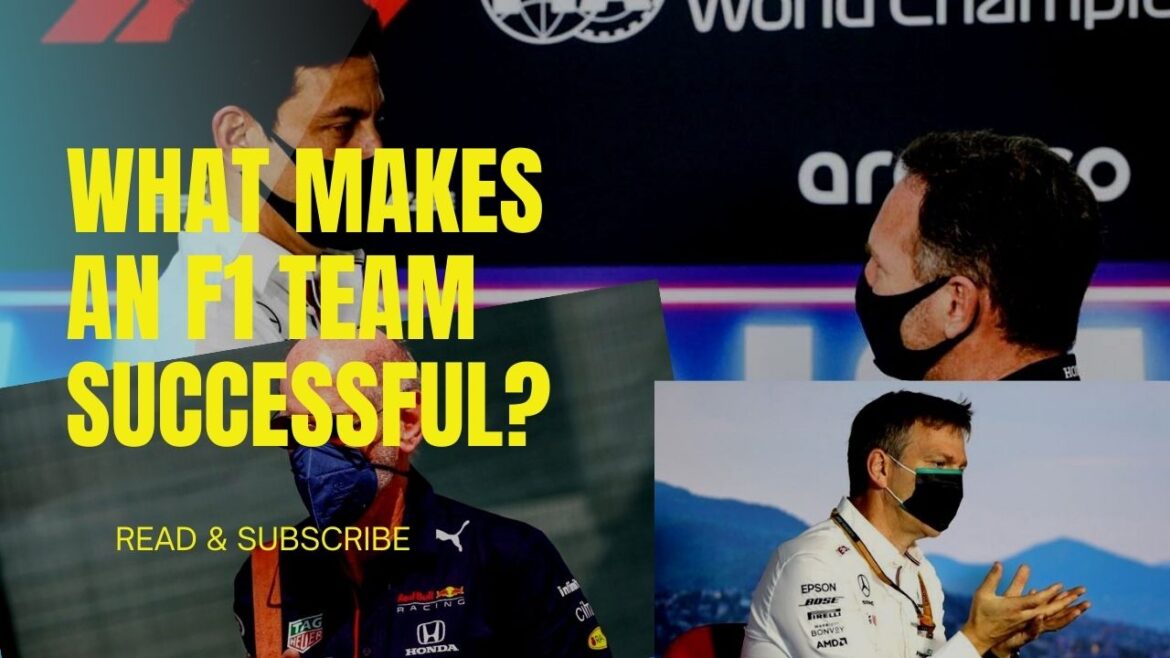 A Successful F1 Team needs many things but there are parts of the team that are very crucial than others. In this section, we look into the various aspects of the teams that make it what it is.

I don’t think you can single out one thing that matters the most, because just like in every team sport, there’s a whole lot of things which all contribute towards success. But if pushed to highlight one particular aspect, then it would be the personnel who make up the team and not the machinery.

I say this because it’s highly skilled and experienced people who design the car, manage the team, and of course, drive the cars. But I couldn’t narrow it down to a single position because I’d dare say that there are two positions in every team that matter.

By far the most important one is the Chief Engineer or the Lead Designer or the Chief of the Engineering team. They decide the philosophy of the car in which it should be based and the ethos around it. This ethos is the principal starting point for all the other packages like Aerodynamics, heating and cooling packages etc.

If you have geniuses like James Allison and Adrian Newey then half your battle is over. Someone like Newey will design a championship-winning car. It won’t overly matter who the driver is, if the car is brilliant then they should win their fair share of races every season. Of course, it helps to have someone like Max Verstappen or Lewis Hamilton driving it, but as said half, of the battle, is already over if the team has a great car.

Now I’ll stick with Red Bull here for consistency, and without a doubt their boss Christian Horner is one of the best team principals doing the rounds. Not only did he manage to poach Newey from McLaren, which set Red Bull up for four championships with driver Sebastian Vettel, but he has ensured that the team has remained very competitive, thanks in part to Newey’s chassis and aerodynamic genius, but Horner essentially manages a very tight professional team overall. Yes everyone else may think he is a pain in their arse, but he isn’t a pain in the arse to Red Bull and their success.

The same tactics now Lawerance stroll is doing getting Mercedes Head of Aerodynamics and others. Before the Max Vs Lewis controversy brewed up, most of the news was about people moving from Mercedes Factory to Redbull.

Of course, I could say the same thing about Mercedes, where Toto Wolff has likewise done an excellent job at ensuring Mercedes dominance since 2014, which gets back to my point that both the team principal and leading designer are what matters most (if I’m pushed to say so) for a successful F1 team.

The Driver in F1 Team

The skills any racing driver need include car control, situational awareness, race craft, engineering competence, patience, balance, discipline, and marketing. Taking just a couple, to go fast a driver has to get as close to the theoretical limit of adhesion in a corner–physics dictate what that limit is. Successful drivers learn sufficient car control that they can test those limits and be able (most of the time) to reel it back in when they push a little too far. You don’t see that in a race normally because that’s not the fast way around the track. Driving in the rain is all about car control.

Racecraft is a critical skill–a driver has to know how to start, how to plan and execute a pass, how to use traffic and backmarkers to gain an advantage, how to create a psychological edge over an opponent. You have to know where and when it’s important to go fast and when to go slow. (Someone once said a race driver should go as slow as possible while still winning the race.)

But in addition to skills, there are some innate characteristics (call them talents if you will) that successful F1 drivers have to have. Processing time is vital–things happen fast in an F1 car leaving you little time to process what is happening. F1 drivers are very busy inside the car doing far more things than steering and shifting. There are numerous controls on the wheel they have to adjust during each lap. All these things require the driver to run his or her mental processes at a very high level.

Concentration/focus is vital. Running a race is an amazing experience for the way your mind goes into almost an altered state of consciousness. Time seems to slow down. You think of nothing else. You have to be able to sustain that for the duration of the race. You can never relax or slack off for even a second.

A great driver in a successful F1 Team needs to have a sense of risk/return–sort of instinctively. There’s no time to calculate whether to go for it or hold back; it’s an instinctual thing. Successful drivers can bet correctly more often than incorrectly. Too conservative and you’ll get passed; too risky and you’ll end your race prematurely.

Unlike most sports, motorsports carry the chance of real violent harm to the participants; a successful F1 driver has to be able to compartmentalize the knowledge of the risks being taken. This is very different from the driver who believes “it will never happen to me.” Those drivers are foolish and take too many risks. Sometimes they’re lucky and it pays off but usually, they crash out so often their careers are self-limiting.

No driver wins an F1 race solo; there is a vast complex F1 team behind each car. A driver has to be able to get those teammates to work hard for success, as well as be able to explain what he is experiencing in the car so the engineering team can react to it. Telemetry cannot tell what the driver is experiencing through the seat of the pants; a car that is easier to drive in a car easier to win in.

There are many others but they’re required just to get into the lowest levels of racing –like karts or Formula Ford — and win, so the F1 team and drivers have developed them long before they get into the majors. They’re so obvious they don’t bear mentioning.